Last year +Jeff Sullivan started a debate that got into, among other things, the hazards of BT (Bacillus thuringiensis), a natural bacteria culture that causes slow, apparently very painful, death for caterpillars but usually doesn’t bother humans at all. (Individual monarch caterpillars are vulnerable to BT; the species as a whole was not endangered by it.) BT is organic. Right. But we’re talking about three different possibilities with BT:

(1) The bacteria are naturally transmitted among insects, at a relatively low concentration. Humans are exposed to very few bacteria unless they eat or handle insects daily, which nobody we know does, right?

(2) The bacteria are cultured in laboratories and the culture is sprayed or poured, in much higher concentration, on vulnerable plants at the key time of year. Humans are exposed to more bacteria than they ever were before microscopes and systematic bacteria culturing were invented, but that’s still relatively few bacteria. (Human volunteers have demonstrated the ability to eat a cupful of live BT culture at a time without showing symptoms.)

(3) DNA from the bacteria is spliced into one or more foods that humans then unknowingly eat every single day over a period of years. Arguably humans are exposed to fewer living, “natural” bacteria than in the first two situations…but reality is that a small minority of humans (who apparently ate a great deal of BT-DNA-enhanced corn) have developed chronic symptoms that they describe in terms similar to the early stages of death-by-BT in infected caterpillars.

It’s not scientifically rigorous to say that pesticide A is “worse” than pesticide B; you have to specify how much of each pesticide under what conditions–and obviously the article linked below is comparing apples and oranges, in terms of the ways serious organic gardeners and small farmers use these pesticides. On the other hand, if we’re talking about commercial “organic” agribusinessmen thinking they can just substitute concentrated tobacco juice for “Roundup” or plant BT-spliced corn instead of spraying the corn with “Raid,” we could be talking about a serious health hazard. Potentially. If they’re trying to plant acre after acre of the same thing, year after year, and “protect” it by poisoning it instead of rotating crops the way serious organic farmers do…

Protecting our environment is not merely a matter of substituting one poison for another poison. We have to learn to raise food crops efficiently enough that nobody has to rely on poison.

This can be done, but it’s not a quick, easy process. Vegetable gardeners and “organic” farmers need to be prepared for a long haul. 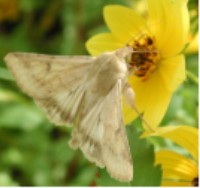 (Credit: “Pollinator” at Creative Commons.) I grew up in a world that had probably ten times as many Corn Earworm Moths as the world had a hundred years earlier. According to Wikipedia…

…the caterpillars infest one ear of corn (or sorghum) apiece. This, I learned as a child, is not necessarily the case. The first year we tried planting corn without spraying a field that had been poisoned every year for several years, we hardly found an intact ear; three and four earworms per ear of corn were not uncommon, and the chickens got more of our fresh, organically grown corn than we did. It took about ten years for predator populations to recover, even locally, to the point where anybody could count on having intact ears of organically grown corn for dinner.

This is typical, Gentle Readers. The first year you stop poisoning a field, you’ll be raising insects and will need to find Green ways to kill the ones you can’t just throw to the chickens. It will take time to rebuild predator populations. You’ll need to rotate crops (sustainable agriculture involves rotating crops anyway) and hand-pick a lot of pests. We used to go out to the vegetable garden with a little jar in our pockets to pick up all the insects, so we could burn or drown them all at once instead of having to squish them on the ground. We tried all kinds of dodges like tying nylon stockings over ears of corn to discourage those corn earworms.

After ten or twenty years, though, all this effort will pay off in beautiful, healthy food. If you want an organic garden, don’t give up too easily. Organic gardening does work, even though the local ecology will need time to recover from the Vicious Spray Cycle. Most of the corn grown in my corner of the world today is earworm-free.

(This was written on November 13, originally scheduled for November 15; it’s been separated into two posts due to length, and will have to appear on November 16 and 17, due to drama at the Cat Sanctuary on November 14 and 15.)

Not last night, but the night before, rain washed most of the leaves off most of the trees. The predominant color of the hills is now drab, with a few lingering patches of oak, beech, pine, or cedar. Nevertheless, we’ve had only one or two brief dips below the freezing mark, and insects remain active. One of the spring kittens managed to pick up a dog tick last week.

And yesterday I saw a monarch butterfly, Danaus plexippus. This is one of the best known and best loved butterflies on Earth… 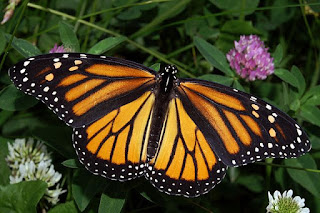 They’re popular because they tour. The one I saw was heading south for the winter, and may come back in the early spring, when milkweed begins to sprout. The female Monarch is restless in spring, and lays only one or two eggs on each milkweed plant. On a quiet day you can hear her wings flap as she flits from plant to plant. Monarch caterpillars eat nothing but milkweed; more than one or two of them might kill their host plant. When they reach their full size, which can be a little over two inches long, the caterpillars often look for a plant other than milkweed on which to hide while they rest and turn into butterflies.

They spend ten or fifteen days pupating, during which they don’t spin cocoons and are visible but don’t look like living animals, and then emerge–as adolescents. Monarch butterflies reach full maturity only when they’re ready to reproduce. In summer this takes four or five days; for the alternate generation, who hatch in winter, it takes the whole winter season.

For hundreds if not thousands of years, monarch butterfly populations were stable. The species became threatened only recently. Efforts have been made to rebuild population levels…

However, the species has been severely threatened by humans’ abuse of chemicals. Monarch butterflies are harmless to plants humans can eat, but they’re vulnerable to poison spray.

Despite the science fiction in the novel Flight Behavior, monarchs are not seriously believed to be endangered by global warming…although, if some of the global warming scenarios scientists have projected were to come true, they would be. The butterflies are most seriously endangered by herbicides that are sprayed, or drift on the wind, onto their host plant milkweed. They are also vulnerable to insecticides, although they tend to scatter themselves widely enough that population levels were not threatened by insecticides alone.

Are the “organic pesticides” discussed below really more toxic than glyphosate or DDT or whatever? Depends on the concentration in which they’re used; water could be “more toxic than DDT” if we’re talking about a trace of DDT on the peel of a peeled apple versus enough water to drown in. Thing is, if you really get into sustainable organic farming or gardening, the “organic pesticides” are going to be like that rifle I didn’t actually buy, last summer, for the purpose of killing a nuisance animal–you don’t even think about them every year. I’ve recommended the oil-and-vinegar treatment for poison ivy, but do I myself use it? No; I dig up my own poison ivy by the roots, which is a better option I’ve recommended for long-term poison ivy control. Another good option is owning (or renting) a goat; they can become lovable pets, and they eat poison ivy.