The heat has broken. Overnight lows have been consistently around 60 degrees Fahrenheit, climbing back into the 70s or low 80s in the daytime.

What’s delayed this post has been making the time to look up an unusual caterpillar I saw in the road on August 30. It was a sort of mocha or even pale persimmon color, two and a half or maybe three inches long, with two pairs of horns on the segments immediately behind its head and a pair of smaller bristles on each segments behind those. The skin showed a stubble of white hairs at close range, but it was not a “hairy” caterpillar. From a distance it looked a bit like a woman’s little finger. The size and the two pairs of horns showed that it was one of the big silk moths, but which one? Books, other than Paul Villard’s, show pictures of adult moths and usually ignore the caterpillars. Looking up any plant or animal online is a slow, tedious process. I finally did it and, after looking at Bugguide.com, have tentatively identified the caterpillar as an earlier stage of Eacles imperialis…possibly a distant relative of the strangest “pet” I’ve ever had.

Some of the big silk moths, like those buck moths that have become a hub at the Blogspot, are described as “variable.” They can have any of several different color patterns and still be recognized by other moths as part of the same species. Eacles has been described as the most variable of all. Caterpillars have green and brown “color morphs.” Moths are very large; females are generally bigger than males, with considerable overlap; individual wingspreads have been measured from three to almost seven inches (8-17.4 cm). All Eacles are gaudy, with a color scheme that may make them look like autumn leaves to predators, although they fly while nearly all the real leaves are fresh and green. Males generally have more brown and females more yellow on their wings. The brown spots are not your usual dull, dead-leaf brown, but a designer-type shade that some writers call purple. Patterns of spots vary.

(Vaguely face-like patterns of spots on the backs of these moths are not uncommon:

Eacles seem completely unprejudiced about size and color. They aren’t very common; what keeps them from becoming pests is that many individuals never find mates, and those lucky enough to find mates seem to appreciate any member of their species they find. The moths aren’t equipped to travel far. Their homebody instincts lead them to return to the same place to rest during the day and, if they’ve found a mate, to snuggle all day. Though the moths probably don’t perceive or recognize humans in any way humans or our pets would understand, their instinct to follow their own scent to “home” can make them seem like loyal pets. After mating the female uses up her physical resources distributing relatively few eggs as widely as possible. Like the other big silk moths, they don’t eat and live less than a week, aging visibly every day.

Youtube videographer Chris Egnoto seems to be trying to get his personal moth to fly on camera. The moth stays put. Before we see the moth, we see the caterpillar crawling around on the arm of a man who’s suppressed the normal human reflex to avoid contact with insects, a throwback to some ancestor who was probably nibbled to death by driver ants while sleeping in the jungle. Anyway the video shows how clumsy the caterpillars are. What look like eyes are more like a helmet design on the back of the head; the caterpillar turns its small, inconspicuous working eyes toward the camera for a moment, probably gives up trying to see the camera, and resumes exploring the guy’s arm, which it can see. (A study of caterpillars’ vision found them to be severely nearsighted; if they were U.S. citizens they could get disability pensions as being “legally blind,” unable to see clearly three feet ahead. They can see the difference between bark or other surfaces and leaves, as they walk on them.)

The silk moth family that includes Eacles and Citheronia are too big to hide and seem to rely on an in-your-face, touch-me-if-you-dare defensive system. Further south, where even bigger moths and butterflies are common, the garish color schemes of these moths might be less adaptive. In North America they have a “What is that thing?” effect on humans and, presumably, on bats and birds. Cats leave the caterpillars alone, but the caterpillars are active in late summer, in between nut crops, and squirrels often eat them.

The caterpillars seem to mimic a family of spiky, inedible little lizards that aren’t actually found in the Eastern States, and share the lizards’ nickname of “devils.” It’s unfair since, despite their prickliness and ability to chomp, these caterpillars are downright lovable compared with the “stingingworms” that grow up to be a slightly smaller family of big silk moths. People are always picking them up and posing for snapshots, showing both how big and how harmless these “horned devils” are.

Newly hatched Eacles have the horns so long, in proportion to the hatchlings’ size, you wonder how they can walk around with such a burden. Older caterpillars seem to sacrifice show-off value for practicality, and have horns and prickles long enough to be noticeable, but not long enough to get in the way as the animals waddle about. (“Waddle” is the word. Silk moth caterpillars push the limits of body bulk in proportion to foot size, and are often found on the ground below trees out of which they fall when they lose their balance.)

Butterfliesandmoths.org has a photo collection showing the range of sizes, shapes, and colors. The one I found was the brown version of the modest-looking green caterpillar near the bottom of the page.

This one has orange-yellow horns and hairs long enough to be described as hair, while mine had black horns and stubble. As a bonus, at the bottom of the page is a link to Professor Raupp’s story about the moth that provided Ronia’s screen name.

Image from Puravida at Morguefile: www.morguefile.com/archive/display/64074 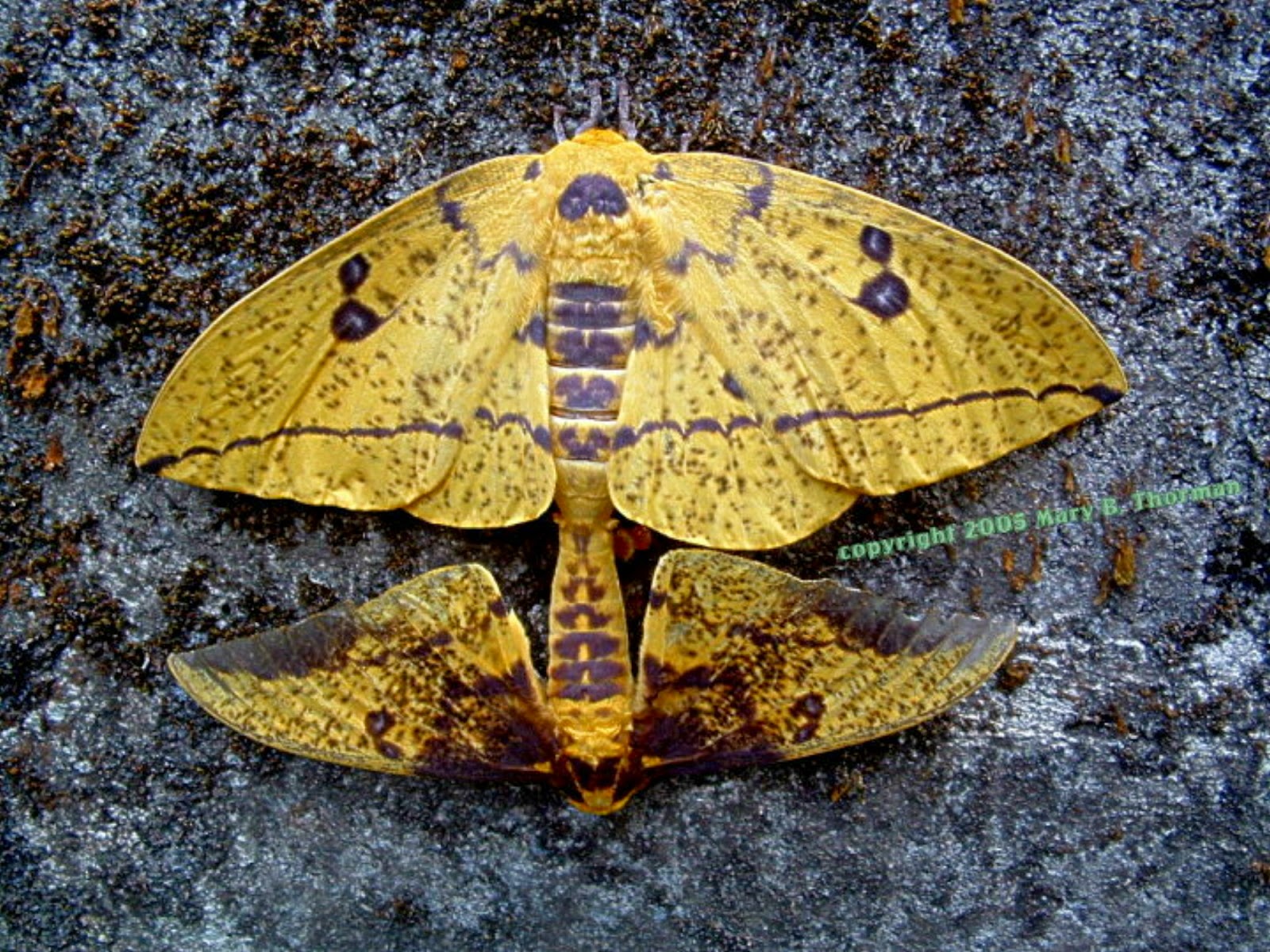