During “one agitated week,” Carapate the cartoon turtle decides to see the world and make new friends. Her adventures are a whimsical mix of things real turtles don’t do (like housekeeping) and things real turtles can do (like turning over on her back and being unable to get up again without help). Along the way, the book is also padded out with little rhymes and quizzes.

This book is easy enough for high school students taking first-year French, but may be too juvenile to entertain them. It’s really aimed at French-speaking five-year-olds. 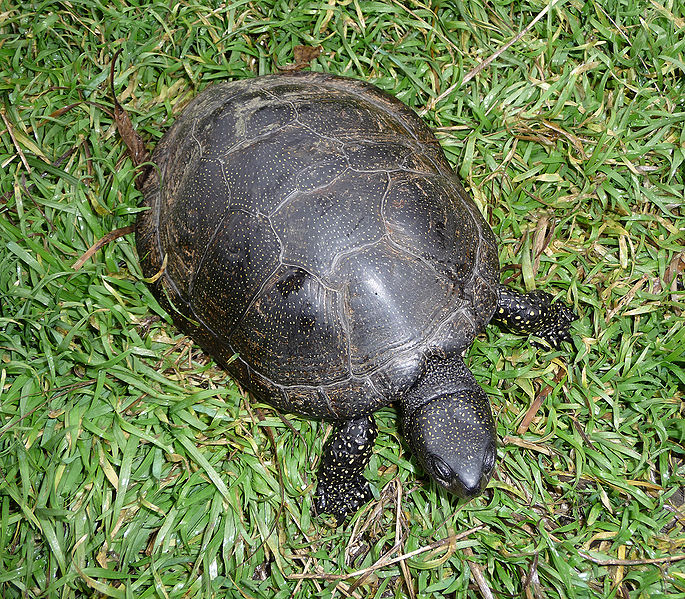 This Ukrainian specimen, photographed by George Chernilevsky, might be a distant relative of Carapate. Very distant. Pond terrapins are not great travellers. Adventurous individuals like Carapate might get as far as a kilometer from their home ponds, but females lay their eggs at home. Males are smaller and lighter, can travel further, and have occasionally been found four kilometers from home. Nevertheless, scientists believe pond terrapins can be traced to their home neighborhood by DNA tests. Individuals usually live about fifty years; a few have lived eighty or a hundred years.

More about pond terrapins at Wikipedia:

If you go to Provence, in France, you can meet pond terrapins and other European chelonian species at a zoo that specializes in chelonians:

There’s more to say about my physical copy of the book than there is to say about its contents. I never intended to buy this book. It belonged to a library. I checked it out once, then lost it. Since it’s such a thin paperback that it could easily be lost between or inside bigger picture books, I didn’t even try to find it, in the library or at home, but just paid for it. A few years later it slipped out of a big coffee-table book that belonged to me. Well, so now did Une Semaine Agitee belong to me. Nobody particularly wanted to keep it, so out to the market it went. It’s a thin, flimsy picture book, well worn. I think I let a child take it free of charge.

Then I checked Amazon and realized that this little book for little people might be considered valuable. Note the Amazon information above…there’s a page for Kolebka, but this book isn’t on it. Am I the only bookseller in the United States who’s willing to resell Une Semaine Agitee? Amazon-France and Amazon-Canada list the title, but don’t show a current price. The other U.S. online booksellers don’t list the title.

Does anyone really want a copy of this book? Kolebka is a well respected author who has other novels and picture books in print. I’ve not seen any of them. If you’re collecting his work you probably already have a copy of Une Semaine Agitee.

It would, in any case, be a Fair Trade Book. Kolebka is around eighty years old, but might still be able to find a use for U.S. dollars.

So, if you want to encourage a writer by buying Une Semaine Agitee as a Fair Trade Book, let me know, and I’ll look up the current price and availability information.