This picture of my cat Ivy was taken when Ivy was about a year old. (Irene is sitting behind her, pointedly waiting for Ivy to finish smearing happy-cat pheromones on my hand.) Ivy looks a little more mature now, but she’s still a small, slim, very young-looking cat. 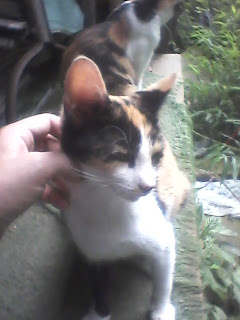 Ivy’s mother was Heather’s and Irene’s grandmother, so properly Ivy is their aunt not their sister. Ivy is, however, a few days younger.

The year the calico divas were born, poison was sprayed along the sides of Route 23, half a mile away from the Cat Sanctuary. I’m not sensitive to all herbicides; this particular one choked me up with respiratory allergy reactions. The cats didn’t have that reaction right away, but one of Ivy’s siblings died. Ivy’s mother then brought her three surviving kittens to her daughter and integrated the litters. Then Ivy’s brother, then her mother, and finally her sister died. Ivy’s mother must have eaten something poisoned. Ivy worried and grieved over her family but, luckily, her nieces accepted her as a foster sister.

As a result of this early loss Ivy is the only one of the calico divas who’s ever seemed to relate to me as a mother figure.

Her role in the cat family seems to be the communicator. Ivy is one of a small minority of cats who learn to recognize human words as well as dogs, birds, or horses do. I’ve seen her watch and listen when I offered a kitten a name that it seemed to accept, then nudge the kitten to respond to its name if the kitten didn’t remember its name later on. All kittens born after Ivy have answered to names.

When last year’s kittens were very young I took them outdoors and snapped their pictures. Gwai, the timid neurotic kitten, seemed too panicky even to sniff at the ground or stare at the camera. Ivy came out and nudged Gwai to watch her, then got in front of the camera and posed. Gwai calmed down and acted like a normal kitten, and everything ran smoothly.

Those buff eyebrow markings stand out and allow Ivy to use “facial expressions” to communicate with me. She has “looks” that mean things like “Let me show you something” or “Somebody is watching you.” If Ivy makes any mental distinction between strange humans, strange dogs, or strange deer, I don’t know how she expresses that distinction, but on general ideas like “Somebody is watching” she’s reliable.

Ivy has never been spayed. One year she had kittens. Then she bonded with a neutered male, and since then she’s spent lots of time with him and produced no kittens. Being a social cat, she enjoys baby-sitting other cats’ kittens; one year she adopted a litter, and this year she’s nursed Heather’s and Irene’s kittens.