Here’s Irene, the “big Mama” at the Cat Sanctuary, photographed when she was about a year old. She’s grown bigger, of course, but this is still what she looks like. 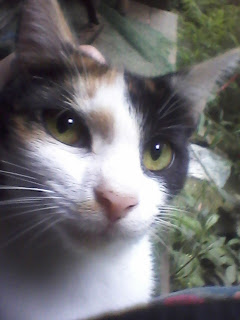 On some cats that soulful gaze might mean “Is it dinnertime yet?” On Irene it usually seems to mean “Why must you be so clueless?” and often appears when Heather and Ivy succeed in getting my attention first.

In some ways Irene is one of those pets who suffer by comparison. She’s smart, in some ways the smartest of the three calico divas–the one who usually stays indoors and minds the kittens. She recognizes some words, though probably not as many as Heather or Ivy. She demands less attention than Heather and Ivy demand from me, and soaks up more attention from kittens. The others rely on Irene to be the homebody. I’m fond of Irene, but, as the good, sweet, dutiful homebody in the family, she can be overlooked while Heather and Ivy have their dramas and adventures.

Because I’m fond of Irene I didn’t want to see, and wasn’t pleased to see, that she’s a carrier of the Manx gene. She has a complete tail, but not a very long one. She’s not much of a hunter or climber. I don’t let animals become obese, but Irene does put on fat much more easily than her American Shorthair and Siamese mixed relatives ever could. In winter I’ve had to limit her food rations. In summer, she’s not a fat cat at all, but her bones are wider and heavier than her sisters’, and her coat is fluffier. These are Manx traits. Irene, who shows no Siamese traits, has been with a Siamese tomcat and produced Siamese-colored kittens with stubby tails.

The Manx gene is lethal. No living cat has two copies of it. A cat who has one Manx gene and one of various other less functional genes is doomed to die young from what some call “Manx Syndrome.” Irene has had kittens, and they’ve died, although this year two of them seemed healthy until the resident raccoon turned against them. (Need I mention that we no longer have a resident raccoon?)

I believe lethal genes should be bred out, not in. I believe Manx cats should be sterilized. From time to time local busybodies have tried arguing with me about having my resident cats sterilized. I think the world needs more social cats, and welcome the Patchnose Family’s kittens. I’ve also watched Irene grieve when her own kittens died, then find consolation in mothering Heather’s kittens. So for the past year or so I’ve been telling the busybodies that if they’ll contribute the money, I’ll let Irene be spayed. This has at least silenced the busybodies.

The thing is that, although no cat enjoys having major surgery, Irene seems less likely to miss having kittens than any other mother cat I’ve known. So far as I can tell, her very favorite thing to do is to play foster mother to someone else’s viable kittens. Social cats rear kittens communally and Irene absolutely adores baby-sitting.