Since I’ve been using Morguefile cat pictures to sign off when I needed to feed some sort of graphic to the Google + monster, some people have asked whether those are my cats. They’re publicly shared photos of cats I’ve never met in real life.  I’ve posted photos of my cats on Blogspot and Persona Paper. Why not post them here, too. 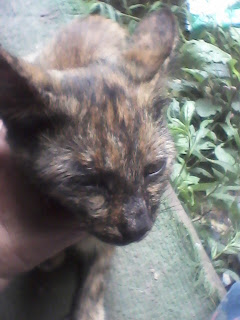 This is an early picture of Heather, taken when she was about a year old. It accurately shows her evenly distributed, “heathered” mix of black, orange, and creamy white fur, and very dark amber eyes–one could almost say brown eyes. It does not show her extra toes. Heather has a big inner “thumb” toe on each forepaw, for a total of six toes per paw. The thumbs look as if they’d be opposable; they’re not. When she was young her extra, non-opposable thumbs looked as if they got in her way. By now she’s a big strong tough hunter cat.

Heather is a descendant of some cats who were rescued from an alley in Kingsport, Tennessee. Other remarkably clever and social alley cats have been found in Kingsport, some even in Humane Society shelters where their bloodlines were destroyed. Kingsport’s social cats seem to be a mixed lot. Some have semi-long hair, some show Siamese traits, and some have non-Siamese partial albinism.

Mine are the Patchnose Family, named after their short-lived ancestor from the alley, who was feral but learned to answer to the name “Patchnose.” Heather is a direct female-line descendant from Patchnose.

As a kitten Heather was the smallest and quietest in the litter. With her dark coat, she tended to fade into corners. She wasn’t even cuddly. She showed no signs of future Queenliness. Her sister Iris was by far the biggest, boldest, apparently the cleverest, the most charismatic, and the most dominant kitten, until their first winter, when Iris picked up an infection and stopped growing. When Heather, Irene, and even Ivy were adolescent cats and Iris was still a kitten for all practical purposes, Iris formed some antisocial behavior patterns and had to leave the Cat Sanctuary, and Heather stepped forward to become the Queen.

Any female cat can be called a queen in English. Most cats aren’t social enough to have social roles; people seldom characterize cats as alpha or beta personalities. My perception is that calico cats tend to have alpha personalities. Heather, Irene, and Ivy generally get along well–all three of them are divas but they respect each other, and if one of them really wants something the others usually concede it. Their social roles seem more like “hunter, homemaker, and communicator.” Still, Heather is the hunter because she’s the biggest, strongest, toughest, and in some ways the smartest sister. (She now weighs about twice what she did when that picture was taken. She’s not fat.)

For cats, control of their humans is a status symbol. (Sometimes bad behavior is a way of showing other cats what the alpha cat can get away with. Sometimes unfriendly or un-cuddly behavior toward you is a way of showing other cats that a beta cat isn’t disputing their claim to own you.) Although she wasn’t a cuddly kitten, Heather is an affectionate cat who runs to meet me when I come home. Often she keeps everyone waiting for dinner while she soaks up attention and tags me with that special happy-cat scent humans can’t consciously smell.

“You don’t think your cat likes you?” Oh, I’m sure Heather does like me, though I’m also sure she’s never confused me with either her mother or her babies. I’m also sure that a purr-and-cuddle session with the three calico divas has at least as much to do with status as it does with affection. I enjoy it, and they enjoy it, but Heather’s insistence on being stroked first and/or most often is the way we know she’s our Queen.

5 thoughts on “Heather, the Queen of the Cat Sanctuary”