I want an avatar for this web site. The system doesn’t make them mandatory, but I want one. Back when I was “born” into cyberspace in 2005, nobody else was using the screen name “Priscilla King.” Now there are a couple of hundred of us on Google + alone; several of them insist that that’s their real legal name, in which case I think they shouldn’t be posting it on the Internet anyway. Anyway, if they don’t see a black cat with amber eyes, how will readers know I’m the first one to use this name in cyberspace?

(For those who don’t already know: “Priscilla King” is not my real legal name as an individual, but I’ve been using it long enough to have registered it as the real legal name of my business.)

Fun part: go to Morguefile.com, search for “black cat,” check out the familiar and new cat pictures. Morguefile pictures are available for anyone to use. The site encourages users to “pay” for pictures we gank by donating pictures we’ve taken. I don’t think any of mine are good enough actually.

Somebody’s added a new black cat image. Cat playing with “mouse” on keyboard. Sort of like Viola the Cybercat (a friend’s kitten who contributed some comic relief to the Blogspot, years ago). Cute. Let’s upload it.

Blogjob says the picture is too big. Let’s open Paint and make it smaller. Let’s cut it down to 12.5% of the original size. Yes, the folder description shows that it’s been stored as a much smaller picture now. Save it. Paste in the smaller picture…

Blogjob opens it as if it were exactly the same size it was before–not even Morguefile “magazine” size, but maybe the size of an extra-large centerfold. Much bigger than the computer screen. The part that shows up on the screen is a blur of pixels that doesn’t look like anything; on inspection it’s the far left corner of the original picture, not showing the cat or the laptop. 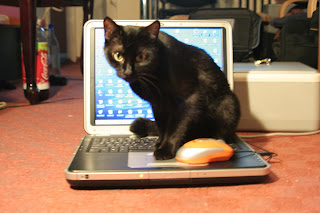