There has been a dedicated audience of gamers who enjoy playing on the private vanilla servers for World of Warcraft. In fact, more than 800,000 players registered to play on the Nostalrius servers to rekindle those fond memories of the vanilla version of the game before all the expansions were added.

TechRaptor is reporting that the petition to bring back a vanilla server for World of Warcraft has surpassed 150,000 signatures. You can check it out on the main page over on Change.org. 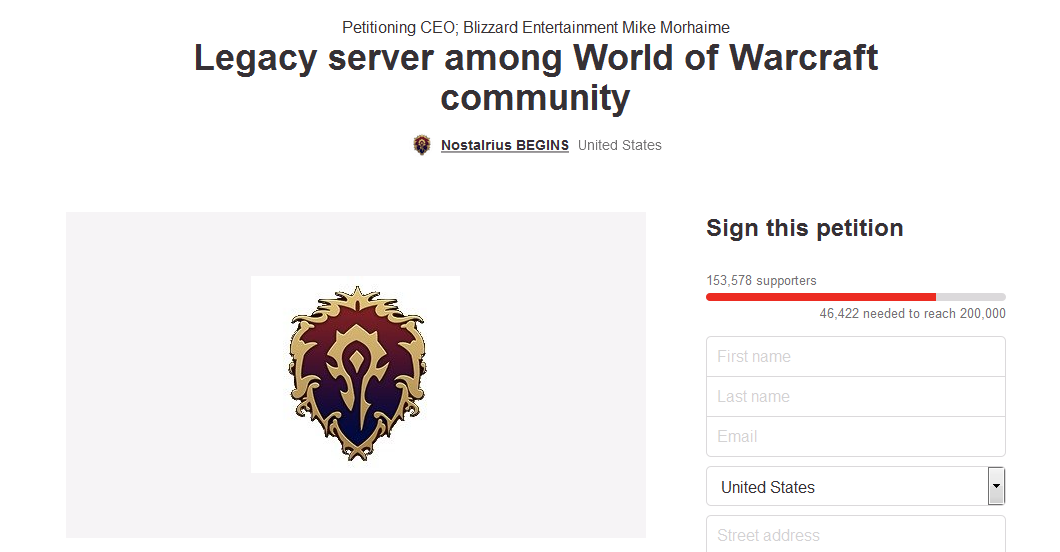 Nevertheless, Blizzard shut down the private server, Nostalrius. They ended up on the receiving end of some DDoS attacks for their efforts.

Nevertheless, the volunteers and players signed the petition asking Blizzard to return a vanilla server to World of Warcraft. It spread enough that it became an operation by the League for Gamers, a pro-consumer advocacy group headed up by Mark Kern, a developer who once worked on World of Warcraft.

The petition is to get Blizzard to either allow certain legacy servers or potentially make an official one. Blizzard originally stated that fans asking for it think they want it but they don’t, but that response didn’t sit well with the 800,000 registered players of Nostalrius, nor the 150,000 active players.

Even ESL commentator James Kaelaris chimed in on the matter, tweeting out the following.

I never played the server because of the moral implications… but I would so love to play a legacy server for WoWhttps://www.change.org/p/mike-morhaime-legacy-server-among-world-of-warcraft-community?recruiter=522873458&lang=en-GB …

A lot of gamers are hoping that Blizzard will respond to the hundreds of thousands of gamers interested in playing vanilla World of Warcraft, and that hopefully the company’s only response isn’t made when under attack from groups like the Lizard Squad.

The entire thing has been vexing to standard gamers who just wanted to play vanilla WoW, but if Blizzard’s stance truly is that they won’t provide servers for gamers who want it, I wouldn’t be surprised if the subscriber base dropped from 5.5 million down to 4.5 million in the next quarterly report.