Capcom wanted to make sure that each of the characters in Street Fighter V maintained their sexy-time. Ryu managed to get a beard and go shirtless. Ken looks ripe for a tour through L.A’s gay bar scene. Alex is dressed up based on tips from Channing Tatum’s Magic Mike wardrobe, and now Guile appears to be have been watching one too many episodes of Chips before making his debut in Street Fighter V.

The new screenshots highlight Guile’s new outfit in the game, featuring buckled up slacks, black combat boots, a black tie with a gold clip in the middle, and a sleeveless white t-shirt so the ladies (and some of the guys) can ogle the man muscles of the American military man. 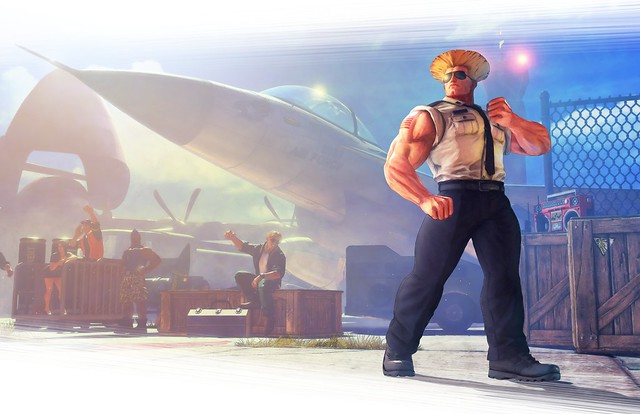 Guile looks like he means business… after he gets done pushing pencils.

The outfit looks a lot less intimidating than his standard army garb, where he’s rocking the camo pants, boots and tank top. Here he appears to look a lot more… professional, but far less dangerous than previous incarnations.

To be fair, though, Guile has practically undergone zero changes to his vanilla self that really made him stand out in a distinct manner. As mentioned, Ken and Zangief and Dhalsim have all had their default appearances changed to something new and fresh. Even Chun-Li let her hair down.

Guile’s outfit is really just an outfit swap… the sort of thing you would have expected from a basic DLC pack. 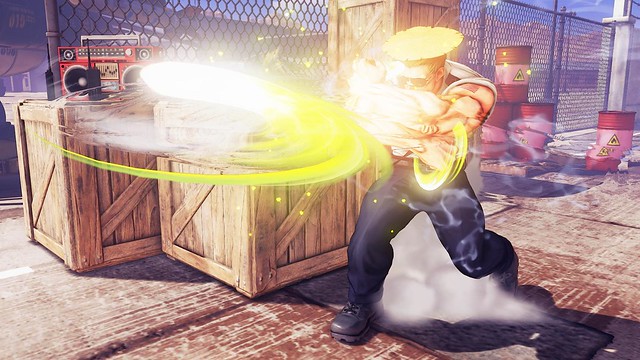 Guile will eventually go live later this month for the PS4 and PC as part of the April update, bringing with him some brand new moves and a lot of the basic specials we’ve all come to expect from the no-nonsense fighter.

Guile has a few new moves in his repertoire, but he seems really outclassed by the likes of Charlie, who is absolutely beast in this newest iteration of Street Fighter.

I guess we’ll see how well Guile does on the circuit leading up to the big turnout at EVO. You can learn more by hitting up the Capcom-Unity page or by checking out more of the screenshots of the returning Street Fighter character in the screenshots below.