The hipster, music-rhythm game Loud on Planet X has arrived on PC and PlayStation 4 recently from indie developers Pop Sandbox, but it didn’t completely land on both devices without a few issues.

The game features an eclectic mix of songs from Tegan and Sara, CHVRCHES, Lights, Metric, METZ, F*cked Up, HEALTH, Purity Ring, Little Dragon, Austra, Shad, Cadence Weapon, July Talk and Monomyth, to name but a few. The system requirements are space, requiring only a gigabyte worth of storage and 2GB of RAM. Anything Windows 7 and above and you’re good to go.

The game is about pleasing the fans, listening to indie music and battling space invaders. You can see what the game looks like in action with the brief launch trailer below.

Loud on Planet X is available for only $7.99 but it’s already had a few fans turning away from the stage. Why? The controls.

Two of the four reviews on the Steam page have already thumbed the game down for this rather large oversight by the developers. It’s noted that the game seems to work best with a touchscreen, but has issues with buttons and the keyboard.

User magicpink made a thread stating…

Some users managed to piece together a tutorial for the controls and how to play Loud on Planet X with a keyboard, mouse, Xbox controller or a DualShock 4. User chrominance has a handy user guide for the controls you can check out below. 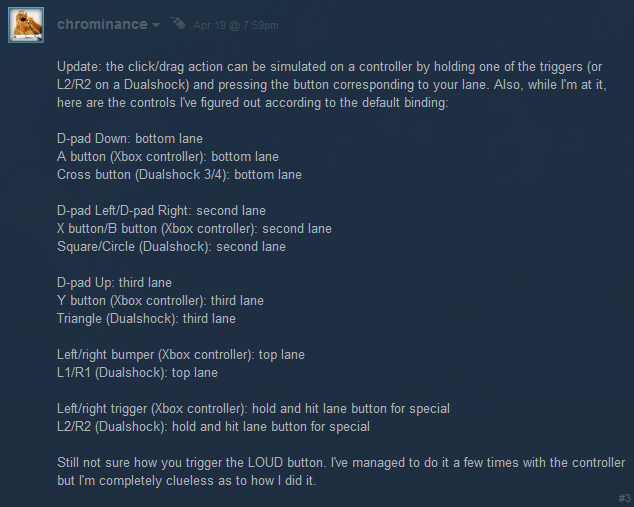 It’s a little bizarre that users have to provide control guides for gamers because it wasn’t included in the game. It’s like the music-rhythm version of Dark Souls: hipsters don’t die edition.

Hopefully Pop Sandbox addresses these issues so that the game will be able to stand up on its own merits outside of having points detracted for something as necessary as the controls.

You can learn more about Loud on Planet X by paying a visit to the official website. The game is available right now on the PlayStation 4 and PC, and it arrives April 21st, today, for iOS and Android devices.