Kotaku Defends Why They Incited Harassment Against Nintendo

In a recent piece published on Kotaku on April 15th, 2016, writer Patrick Klepek attempts to defend his previous coverage of the Alison Rapp scandal – where a former Nintendo employee was fired for moonlighting at a second job. He glosses over the new information that has come to light indicating that she may be an escort and that was the real reason she was fired, and instead focuses on #GamerGate as a harassment campaign.

Klepek starts by claiming that reporting is about finding the truth and wading through the minefield of sometimes complex topics, but he failed to investigate if the claims were true about Rapp’s second job as an escort. He even admits that Kotaku was one (amongst many) of the media outlets who were critical of Nintendo for firing Rapp, but never followed through to see if what the company had issued in their press statement was true. Instead, Klepek defends the misreporting that took place by equivocating around the need to verify facts, stating that it would only amplify “unconfirmed claims”…

“Rapp did not comment when asked about [the escort job], nor has Nintendo. Even the idea of asking about this, though, stirs some controversy. A reporter’s obligation is to find the truth, but for stories like this we also weigh the potential of incentivizing harassers, of amplifying unconfirmed claims.”

Essentially, Klepek has admitted that Kotaku did not want to verify the claims, nor report the whole truth.

If the claims are true or not, it should be up to the media outlet to confirm that information and minimize any additional undue harm.

Inc.com [backup] did a fine job of at least assessing the information that was present — and the relevancy of digging into that information — that may have led Nintendo to their decision of firing Rapp. It doesn’t have to be salacious, just factual.

If Klepek was keen to put a spotlight on Nintendo and Rapp involving harassment, he should have been keen on verifying all the facts so that the public has the whole truth, not just the partial truth that fits a media outlet’s sociopolitical narrative.

After the media blamed #GamerGate for getting Rapp fired, anonymous diggers discovered that it appeared as if Rapp moonlighted as an escort while working at Nintendo. Kotaku did not make the discovery of Rapp’s second job, nor did they seek to vindicate Nintendo’s position after the company was attacked for firing the marketing specialist.

Kotaku also avoided seeking clarification of the details surrounding the firing of Rapp, which could have prevented other media outlets from further misreporting on the situation. Instead, they ran with the harassment narrative. Klepek even says as much in the article, writing…

“When she was fired, Rapp publicly laid blame at the hands of harassers who she said motivated her employer to “look at her tweets.” We reported that story and were critical of Nintendo for having taken no public action involving Rapp all these months, only to then fire her.”

Kotaku’s articles inflamed misinformation and undue harassment at Nintendo’s expense. Kotaku never verified Nintendo’s position before inciting harassment against the company, the only thing they did was update the original story with Nintendo’s response. Meanwhile, social media blew up with Nintendo and #GamerGate taking the brunt of the blame.

We believe @Nintendo should have defended @alisonrapp but it is what it is. best wishes to both parties~https://www.youtube.com/watch?v=K3oMiHV38PI … 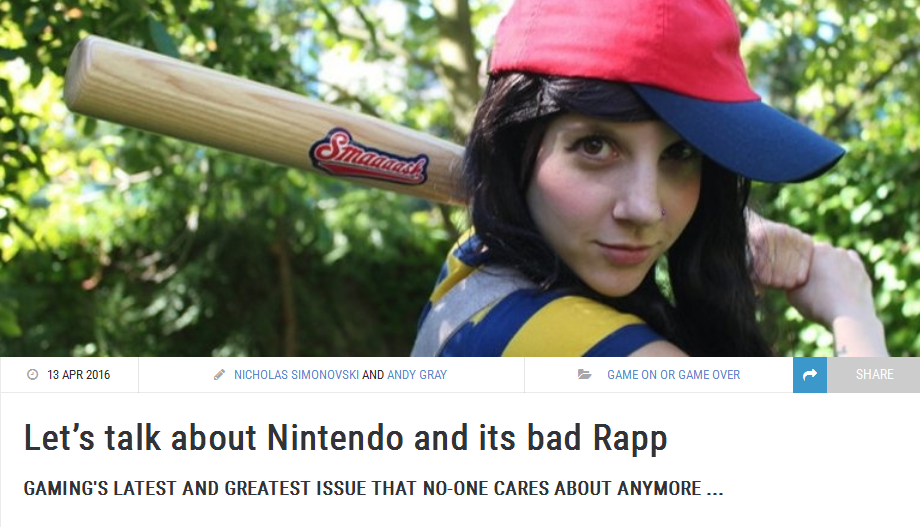 The bigger question becomes: why didn’t Klepek wait for Nintendo’s response before publishing the original article? Additionally, why didn’t Klepek verify what Rapp’s second job was before putting Nintendo under a critical spotlight?

Following Kotaku’s original report, many media outlets picked up Klepek’s story and continued to misreport on the situation based on Klepek’s spin. Various outlets attacked Nintendo for not standing up for Rapp, but none of them investigated if what Nintendo was stating was true, or whether or not Rapp did violate the company’s employment policies.

If Nintendo decided to sue for defamation, it wouldn’t be unfair.

So are game journos going to apologize to #Nintendo now that they know Rapp was moonlighting as an escort? #gamergate

Klepek goes on to talk about harassment… pinning the crux of the story on social media attacks, writing…

“The interesting questions raised by these debates, often focused on portrayals of sex and gender and artistic integrity, are easily drowned out by ugly and disingenuous attacks meant to overwhelm and silence.

“These attacks largely take place on social media, putting them out of sight and out of mind for many.”

This is a disingenuous statement that contradicts his core point: if these attacks largely take place online and out of sight and out of mind of most people, why exactly are random troll attacks newsworthy?

But more importantly, where are these attacks happening in social media? Klepek points to harassment and bombarding attacks against himself and Rapp, but his article provides no evidence of these attacks, nor does the article that was published on April 2nd, 2016. The only evidence we receive of this harassment is a critical tweet about the localization of Fire Emblem, everything else is hearsay.

Klepek also doesn’t define “harassment” in the piece, leaving one to question if the comments were meanly written disagreements, critical points of data comparisons, or picking apart fallacious arguments?

We don’t get any definition of these nebulous, all-encompassing terms, nor any legitimate evidence that they’re happening to some riotous degree.

When Bill Clinton was found out to have cheated on Hillary with Monica Lewinsky, there was all manner of critical comments sent his way. Was that harassment?

Klepek tries to tiptoe past the topic public scrutiny and criticism by stating that the nitty gritty details make it tough to report on stories like this, writing…

“The reporting of this saga has been tricky. We’re not talking about products. We’re talking about people in all their complexity. Every new piece of “evidence” is more salacious than the last, making it hard to tell if people care about Rapp’s firing or simply find themselves enraptured by the spectacle of a person’s personal life becoming public.”

The question becomes: had Klepek originally dug into the details and moderately reported on Rapp’s firing in the first place, would there have been a need to correct the misinformation that Kotaku, Playboy et al., published?

Klepek tries to further defend himself by claiming that the information he’s sent that might offer additional facts and information could be misleading, writing…

“Hundreds of people have emailed and tweeted, asking me to look into this or that, but it’s difficult to know their agenda. “

Why not ignore the agendas and examine the evidence?

Klepek ends the piece by claiming that he has also become a victim of harassment. He doesn’t apologize for forming a narrative that had other media outlets aggregating his content that was later used to harass Nintendo on social media. Instead, Klepek pontificates…

“For the great sin of covering this topic, the personal details of my family have been investigated, with harassers finding ways to target us in real-life. That we cannot even have a discussion without such extremes shows how toxic this has all become.”

Klepek provides no evidence for the harassment his family received, but all of this comes back to a question: Had Klepek done his job, examined all the evidence, all the facts, and waited to publish the story without a spin on harassment, would the topic still have become “toxic”?

More importantly, will Kotaku and other media outlets ever apologize for smearing Nintendo’s name across the web based on a lack of information?

49 thoughts on “Kotaku Defends Why They Incited Harassment Against Nintendo”