The Audi R8 will be one of the key promotional items featured throughout the upcoming CG flick, KingsGlaive: Final Fantasy XV. Audi and Square Enix have released two new shots of the Audi R8 from the upcoming film, where gamers can check out the car up close with the HD images.

The two images feature the car looking snazzy, with some specialized designs on the front and sides to give the impression that the car is a specialty edition. The rims have a modern Victorian elegance to them that fits in with the rest of the Final Fantasy XV aesthetic, and the copper-plated brakes and carbon grafted side mirrors help compliment the expensive looking design. An equally exquisite spoiler rounds out the back.

You can see the side-profile of the car in the image below.

The Audi R8 was one of the prominent shots from the trailer that both Square and Audi ensured audiences were able to witness during the promo video. The second image is the one from the trailer itself, where we get a full frontal view of the black honeycomb grill and vented panels under the headlights.

The Audi symbol stands out loud and clear along with the fictional license plate. You can check out the image below.

The Audi R8 shots also arrived with some pre-order announcements for the Xbox One and PS4. On Xbox One you get some Xbox Live Avatar clothes for the males and females based on Noctis’ gear. You also get a Carbuncle pet, an in-game weapon, some fishing DLC and a 16-bit buddies skin for the in-game car.

The PS4 pre-order set features the in-game Masamune DLC weapon, the 16-bit buddies skin for the in-game car, a PS4 theme and the fishing DLC. 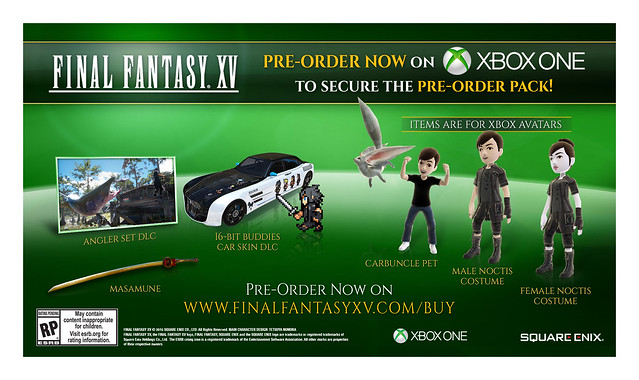 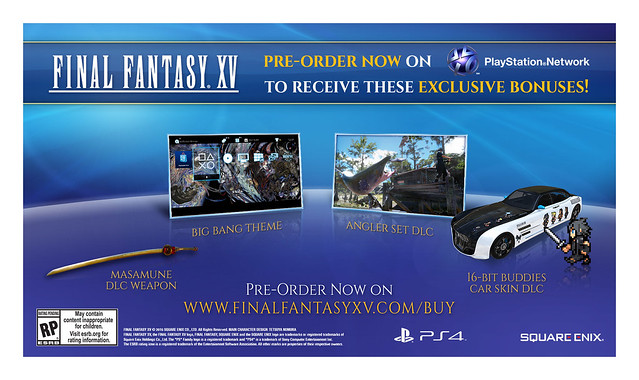 Pretty lame pre-order bonuses. Then again, pre-ordering is pretty lame these days in general unless you don’t mind being ripped off. It’s best to wait a week or two before purchasing AAA games.

Anyway, Final Fantasy XV is due for release on September 30th for the Xbox One and PS4. For more info feel free to visit the official website.