A mysterious new teaser trailer has made its way online supposedly featuring a clip from the upcoming Infinity Ward first-person shooter, Call of Duty: Infinite Warfare.

The 33 second teaser features a bald dude talking about the destruction and pain they’ll bring to their enemies. The name of the group? The Settlement Defense Front. You can check out the clip below that All Games Delta picked up from Izuniy.

The guy looks like an uncanny valley version of Peter Weller. For a moment I was actually kind of hoping that it was him… it would have added some legitimacy and intrigue to the title, also it would have absolutely crushed any kind of skepticism because there’s no way a hoax video would go out of their way to pay for the likeness and voice of Peter Weller just to troll people.

Anyway, previous rumors have indicated that Activision and Infinity Ward will announce Call of Duty: Infinite Warfare this Tuesday on May 3rd.

According to Charlie Intel, an image from a leaked Canadian poster reveals that Infinite Warfare will release on November 4th, 2016 for home consoles. The PS4 version is the only one referenced in the poster. 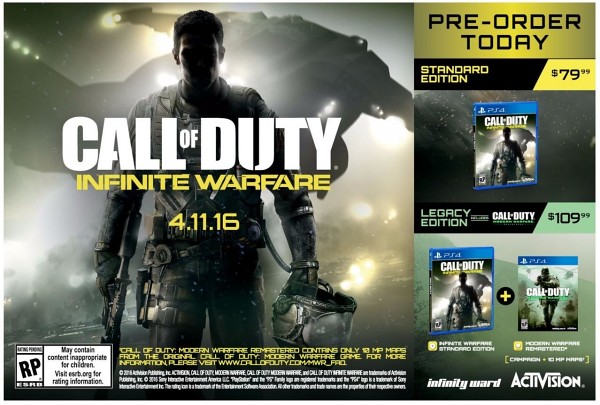 As you can see, there’s also the revelation that the original Call of Duty: Modern Warfare is also being remastered and included in the Legacy Edition for $109 Canadian Loonies.

The remastered version of the game will come with only 10 maps of Call of Duty: Modern Warfare. Most hardcore gamers expect Activision to rape the wallets of fans by charging for the extra maps as DLC. This would be a pretty scummy thing for them to do, but I wouldn’t put it past them.

We’ll find out soon enough if or when Activision is going to announce that Call of Duty: Infinite Warfare is the next game in the long running series.