The Lizard Squad has been a pang in the side of gamers for years. This time, however, the denial of service attacks are coming in response to Blizzard’s recent move to shut down private servers for a discontinued version of World of Warcraft called Nostalrius.

According to Gamezone, thousands of players gathered on the Nostalrius servers before they were officially shutdown following Blizzard threatening the server operators with legal action.

The operators ran the Nostalrius servers for free (but accepted donations for hosting fees), doing so for the love of the original vanilla version of World of Warcraft before all of the changes, nerfs, alterations, class modifications and expansion packs that occurred in the official version of the game. Nostalrius was designed so people could just play the old version of the game and have fun with friends.

Blizzard didn’t want people to have fun with a version of World of Warcraft that they discontinued to support, so they had the servers shut down.

A video has gone viral showing players enjoying their last moments in the server before Blizzard shut it down.

The server boasted more than 800,000 registered accounts and actively had more than 100,000 concurrent players online at about any single time. It’s a stark contrast to the official subscription base forWorld of Warcraft which peaked at around 12 million back in 2010, as reported by Blizzard. More recently, World of Wacraft was reported to only have 5.5 million subscribers as of November, 2015, as noted by IB Times.

YouTube entertainer JonTron was so perturbed at this move from Blizzard that he took time out of his day to do an eight minute video ranting at the fact that the server he played on and had a lot of fun with was being shut down. He acknowledges that Blizzard is well within their rights for doing so, but feels as if it was still a cruel thing to do to fans of vanilla World of Warcraft.

The outpouring of support for the private server spawned the standard petition, only this time the petition skyrocketed to nearly 100,000 signatures requesting Blizzard CEO Mike Morhaime to reconsider the company’s stance and policy regarding legacy servers, with the Change.org petition stating…

“We never saw our community as a threat for Blizzard. It sounds more like a transverse place where players can continue to enjoy old World of Warcraft’s games no longer available, maybe until a new expansion appears; a huge and powerful community of fans that remains attached to future Blizzard games, as we have in no other gaming company.

“We don’t have the pretension to come up with a complete solution regarding legacy servers that you and your company didn’t already think about, but we’d be glad and honored to share it with you if you’re interested, still on a volunteer basis.”

Not everyone has taken a diplomatic approach to the servers being shut down. Legendary troll group, Lizard Squad, has been paid to attack Blizzard’s game servers. However, they don’t explicitly say if it’s in response to the shut down of Nostalrius. 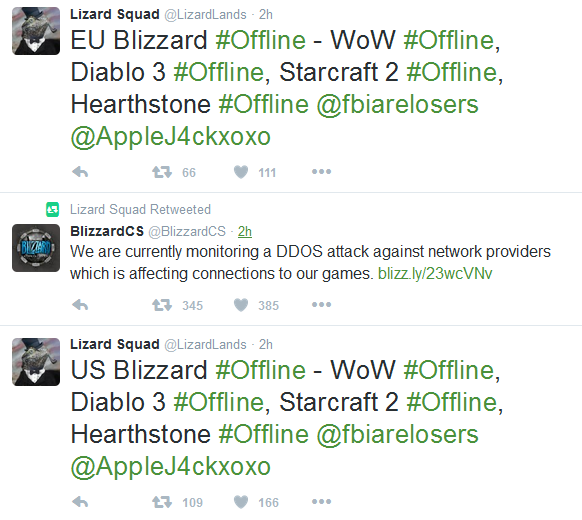 Blizzard noted that there are no attacks on user account data, and this is all an attempt to prevent people from logging in and playing StarCraft, Diablo and World of Warcraft.

@RayHarfold They’re only spamming bad requests at our servers. Your account information is still secure! ^GX

@BlizzardCS could this be a response to the demanded shutdown of Nostralius? hmmm?

Many within the Twitter feed are saying that they aren’t particularly remorseful for Blizzard’s servers being attacked since it seems to be the only way to get the company’s attention; hitting them in the wallet.

It’s sad if it’s true that Blizzard will refuse to address the situation involving private servers for legacy, unsupported versions of World of Warcraft. Nearly a million people seemed to love Nostalrius, and that’s more than what a lot of recent games get in terms of an install base. Denying people the right to have fun seems disjointed with what fans are asking for.

Some people even asked if Blizzard would officially bring back legacy content that they could pay for. Blizzard responded by saying that some people think that they want it but they don’t… even though 800,000 people apparently do want legacy content. I imagine the other 6.5 million other people who cancelled their subscription to World of Warcraft over the past six years probably also feel the same way.