One of the things a lot of gamers complain about is being preached to in games that they play for fun. No one plays Call of Duty to have a character pull them aside and give them a lecture about not shooting people, just the same as no one wants to play GTA just to have the cops give them a half-hour talk about not speeding. The rules of the real world are implemented into games, but it’s up to players to choose how they utilize their own agency. In the new expansion for Baldur’s Gate, many players feel as if the developers used the brand as a way to push for some identity politics in the game as opposed to trying to tell a good story with fleshed out characters.

The hornets nest was originally kicked when Kotaku published an interview with one of the Beamdog writers, Amber Scott, who took digs at the original Baldur’s Gate, saying…

“If there was something for the original Baldur’s Gate that just doesn’t mesh for modern day gamers like the sexism, [we tried to address that],” […] “In the original there’s a lot of jokes at women’s expense. Or if not a lot, there’s a couple, like Safana was just a sex object in BG 1, and Jaheira was the nagging wife and that was played for comedy. We were able to say, ‘No, that’s not really the kind of story we want to make.’ In Siege of Dragonspear, Safana gets her own little storyline, she got a way better personality upgrade. If people don’t like that, then too bad.”

Those comments from Scott coupled with a character who lectures players about transgenderism, along with a few other comments and remarks sprinkled through the Siege of Dragonspear expansion had some gamers reeling from what they felt was an overexposure to identity politics being placed where they didn’t belong. This included a line from one character who mocks #GamerGate with a “It’s about ethics” line.

When some gamers criticized this aspect of the expansion on the Beamdog forums, there were reports about the threads being locked and deleted. This led to some people asking for refunds on Steam. 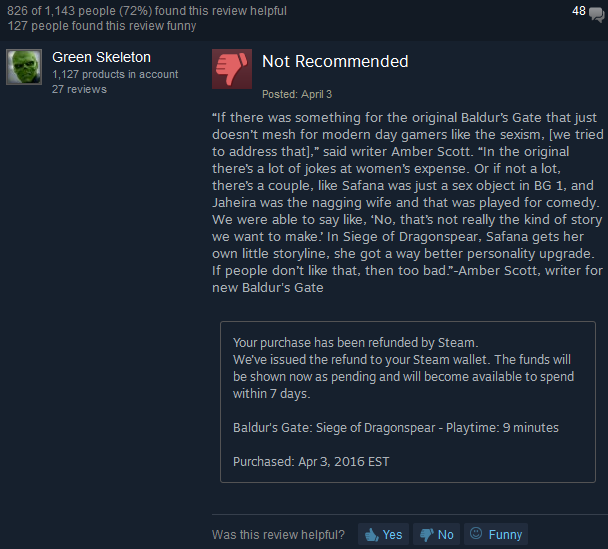 According to Kotaku in Action, Scott later clarified that the inclusion of these topics were important and that she was happy to be a “SJW”, writing on the forums…

“I consciously add as much diversity as I can to my writing and I don’t care if people think that’s “forced” or fake. I find choosing to write from a straight default just as artificial. I’m happy to be an SJW and I hope to write many Social Justice Games in the future”

What’s interesting is that over on the Beamdog forums, some users make it known that trying to make enemies out of a section of your user base to push sociopolitical views can quickly backfire. Xzar gave Beamdog a warning, stating…

“You could prepared better for this, as you knew this would happen. Don’t dabble into divisive writing if you don’t want to be center of political attention. Now, you earned your place alongside Tim Schafer as one of top enemies of Gamergate, and this position has its ups and downs. On positive side, Kotaku, RPS and all other outlets of holier-than-thou intelligentsia better pick this story up fast, and promote your game. Otherwise, Beamdog will be alone in this mess.”

After the threads were locked on the Beamdog forums, Baldur’s Gate fans took to the Steam forums to express frustration. There are countless threads popping up regarding the expansion pack and the Social Justice Warrior elements.

The reviews reflect these frustrations as well, with users like Chrjs stating that it’s not the inclusion of “diverse” characters but the poor implementation and forced political views that are being hammered into the player that make for an uncomely experience…

“ I would like to start out by saying I don’t hate gays or transsexuals in any way. They do them, and I do me. I really don’t care, because it doesn’t affect me. What I do care about is when this is shoved down my throat and I am forced to mingle with it instead of letting me discover it for myself.

“It is not natural for a person to just come flat out and tell you their sexuality when you meet them for the first time. This is the mark of poor writing and SJWs trying to “represent” a minority that they themselves don’t even understand, which by itself is pretentious and shallow as ????.”

Chrjs isn’t alone, there are others who point out that the game seems to unnecessarily tackle and include political talking points that don’t fit the lore. For instance, as a lot of fans of Baldur’s Gate pointed out, transgenderism is illogical within the context of the Sword Coast realm because there already exists potions and relics that can swap a character’s gender, hence gender dysphoria wouldn’t be an issue. This particular criticism about the topic matter isn’t addressed by Beamdog.

Instead, the developer has decided to fight back against the negative reviews by asking users to post positive reviews. Trent Oster made a thread stating…

“ I usually spend most of my time lurking here, but I’d like to ask a favour. It appears that having a transgendered cleric and a joke line by Minsc has greatly offended the sensibilities of some people. This has spurred these people into action, causing them to decide this is the worst game of all time and give it a zero review score on Steam, GoG and meta critic. Now, I’d like to ask for that favour. If you are playing the game and having a good time, please consider posting a positive review to balance out the loud minority which is currently painting a dark picture for new players.”

Following the post from Oster, a number of positive reviews have been popping up on Steam, recommending the game. However, the rest of the community are not upvoting these positive reviews… they’re showing more support toward the negative reviews, which are rated as the most “Helpful”.

The top most “Helpful” review actually isn’t even about the gender and identity politics, but about the game’s multiplayer being buggy and some unwelcoming glitches when it comes to the pause menu and NPCs talking. There’s also plenty of negative reviews pointing out that the expansion pack breaks mods in Baldur’s Gate, which upset plenty of people. It’s not just the so-called SJW issues that have the Baldur’s Gate comunity up in arms.

Nevertheless, all the talk about identity politics in Baldur’s Gate has led some to take to the forums to ask about how prevalent and invasive the SJW topics are? One user named Planguy wanted to know if it’s possible to ignore the themes and enjoy the rest of the game, others like Iambluelightning wanted a more thorough and detailed breakdown of the topics so they could make a more informed decision, writing…

“This has gone on long enough. People are complaining about SJW stuff without mentioning what it is. What are they? Please explain as many as you have experienced. Many people’s buying decision may hinge on this and all we have is that interview. So if you experienced something that you believe to be SJW, please mention it here.

Various other threads about the SJW material in the Baldur’s Gate expansion Siege of Dragonspear were locked or deleted after they began complaining about #GamerGate and telling the “gators” to get out.

A user named Nfft made a thread asking “Why are Ggers tolerated on this board?” stating…

“GamerGate is a hate and harassment group, and yet ppl who identify as them or support them are given free reign on this forum, not to mention that they are allowed to attack the new BG expansion and insult the dev team merely because they included trans character in the expansion or had a women on their writing team? They should be removed from this forum, hate speech and spamming are against TOS to begin with.”

However, before the thread was locked a lot of well-reasoned individuals managed to debunk the narrative about #GamerGate and explain that it really is about ethics in journalism, and that #GamerGate had nothing to do with Baldur’s Gate fans being pissed that their beloved franchise was being mishandled.

Gamers don’t mind that these “diverse” characters are included in the game, but ignoring the world’s own lore, using NPCs as political preachers, and restricting player agency to adhere to prescribed political views will only push players away who don’t readily agree with those politics.

Unfortunately, Baldur’s Gate had to be victim in the ever-raging culture wars.