Capcom has a ton of new features, updates and content planned for release in the next major update for Street Fighter V on PC and PS4. The update includes the first of many DLC characters for the game, with the first being Alex from Street Fighter III, who made his debut back in the arcades in 1997.

The details were rolled out over on the Capcom Unity blog, where Haunts rolled through tons of new details for Alex, his moves, his V-Trigger and his specials. The grappler returns with a number of new and classic moves, along with the ability to pummel opponents in the mid-range and power bomb them when up close.

They also rolled out some screenshots of Alex in action in Street Fighter V, which includes his brand new look. Check out the shots below. 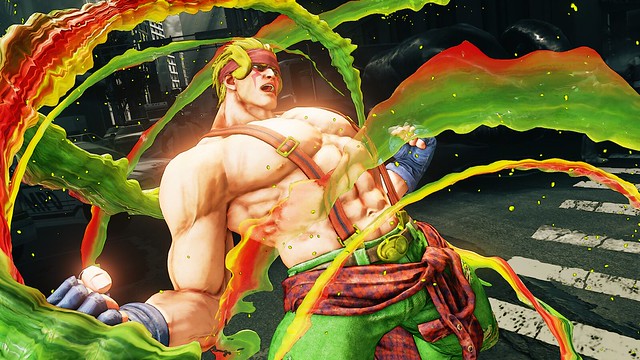 As you can see, Alex now has on metrosexual suspenders that don’t cover his nipples, as well as ripped green jeans and black boots. Instead of being in green sweat pants he’s now in green jeans and instead of having the suspenders hanging down at his sides while he bares his man-chest, they’re now pulled up over his shoulders.

He also has a flannel shirt wrapped around his waist. He’s obviously too hot to wear it and it would just look silly stuffed in his back pocket, so he tied it neatly like a bow around his waist to showcase his superior bow-tying skills. 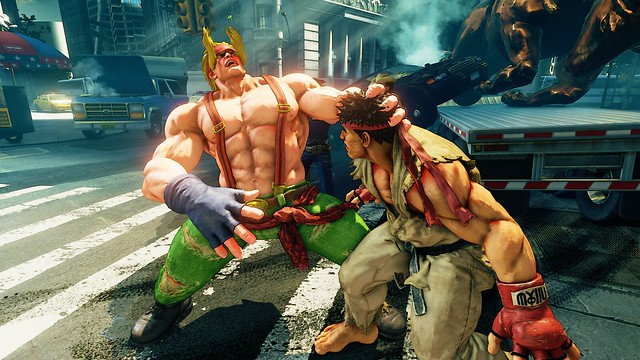 Alex also appears to have received a haircut. His long flowing locks are just a bit shorter than what they used to be back when he was in sprite format. Now his hair is only neck length.

I never noticed before but Alex appears to be a poor man’s rip-off of Terry Bogard with a hint of T-Hawk pushed in there. 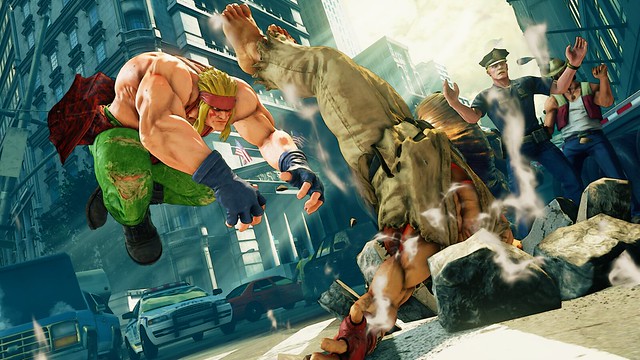 Alex can either be purchased with real money or with the in-game virtual currency known as Fight Money. Most people should have enough by now to buy Alex with their hard-earned Fight Money. If not, you can always put some real coins into Capcom’s coffers.

In addition to Alex joining the roster, they’re also adding new Challenge Modes that includes trials, demonstrations and tutorials to help gamers better learn the fighters and maximize their abilities.

They’ve also tweaked some of the throw escapes, certain V-Trigger framing issues and some other bug fixes and balance tweaks. They don’t give an exact date but the major update containing Alex, the new modes and the balance changes will go live before March is out.