XSeed Games released a new trailer for Senran Kagura Estival Versus, the upcoming beat-’em-up title for the PS4 and PS Vita. The latest trailer spotlights the girls from the Hebijo Academy, putting a focus not just on their bouncy features and jiggly assets, but also their unique fighting abilities and their special transformation maneuvers.

Like the other trailers that came before it, the promo piece highlights each of the playable girls from the Hebijo Academy, this includes Miyabi, Murasaki, Imu, Ryōbi and Ryōna. You can check out the trailer below to get a look at each of the girls and their special abilities.

LAUNCHES 3/15/2016 The high-flying, high-bouncing ninja girls of SENRAN KAGURA return, this time with more moves, more playable characters, more story and attitude, and more destruction online with matches that can support up to 10 players (PS4 version only; PS Vita supports up to 4 players).

It’s interesting that we get to see some of the long-range capabilities of some of the characters at play. For instance Ryōbi takes the fight to enemies using some long range rifles, which is great for players who want to keep their distance and dispense some damage from afar, this is in addition to her standard melee-based combo attacks.

Ryōna also has some fast-firing long range, high-tech pistols at her disposal. The short clip of her in action showcases the fighter quickly taking out hordes of enemies with her twin pistols in very quick succession.

In addition to letting loose the new trailer there’s also a promo piece featuring the limited edition of Senran Kagura Estival Versus called “Endless Summer”. You can check out the promo poster below. 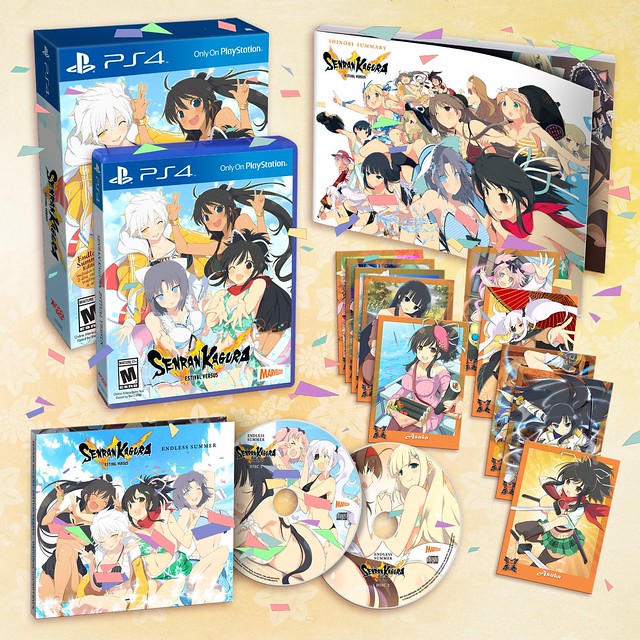 The limited edition of the game comes in a specially marked PS4 box, along with a fully illustrated art book (and hopefully it’s not censored like the Bravely Second art book that has come to the West), along with a pack of collectible cards, and a two disc soundtrack.

Senran Kagura Estival Versus is due for release on March 15th for the PlayStation 4 and the PlayStation Vita. You can grab a copy for $39.99 digitally for the PS Vita or physically for $49.99. For the PS4 you can get the digital version for $49.99 or the physical version for $59.99. For more info feel free to visit the official XSeed Games website.