There’s no time stamp on the post, no date, no name, and no links, just a page recently posted on Rock, Paper, Shotgun clearly defining their ethics policy regarding affiliate links. I don’t know why they thought they could sneak the page up and out into the public without #GamerGate noticing, but #GamerGate has noticed. If you try to sneak the meat of ethics into the swamp of games journalism, you can bet your bottom dollar a gator will smell it.

I was informed about the recent publishing of the Rock, Paper, Shotgun page by a concerned reader who has been keeping an eye on the ethics policies of various websites when it comes to adhering to the newly reinforced guidelines by the Federal Trade Commission regarding paid endorsements, native advertisements, and affiliate links.

You can check out the page over on Rock, Paper, Shotgun right now to see what it says. According to the Internet Archive Wayback Machine the page went online March 20th, 2016 [Update: I was recently sent an archive link showing that the article was originally published in their backend first on March 16th, so they may have made a quick edit to it on March 20th.]

According to the page info it was modified early in the wee hours of Sunday morning. I’ll whip out that dreaded red line-drawing that Social Justice Warriors hate so much so you can see it for yourself in the image below. 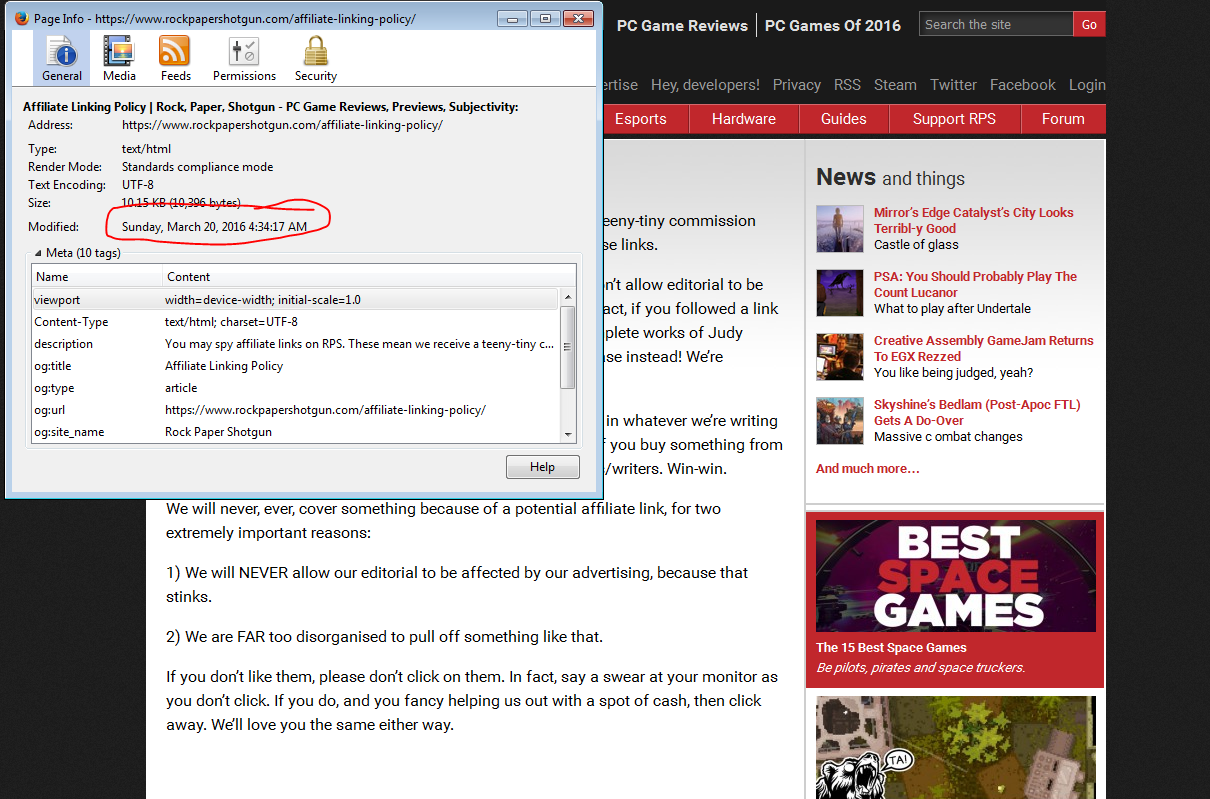 They probably didn’t want anyone to know that the page went live, but nothing on the internet is sacred… especially when it regards #GamerGate and ethics in journalism.

As for the new policy regarding paid affiliate links, the page states…

“You may spy affiliate links on RPS. These mean we receive a teeny-tiny commission from a retailer if you buy something after following one of those links.

“CORRUPTION? Well, no, because that would be rubbish. We don’t allow editorial to be dictated by advertising in any form, and it’s the same here.”

The same couldn’t be said for their sister site within the Gamer Network, VG 24/7. It was found that they had a couple hundred affiliate links sprinkled throughout their articles where they were making money on click-through commissions without disclosure. That is a clear and evident violation of the Federal Trade Commission regulations, even though the site operates out of the U.K.

Back in November, 2015 the FTC was promptly alerted to this clear-cut case of corruption and VG 24/7 quickly and adequately added disclosures on their articles in January of 2016 to let gamers and readers alike know that they get commissions from affiliate links. Many sites within the Gamer Network also updated their affiliate disclosures as well.

Rock, Paper, Shotgun decided to take things a step further, however, by actually dedicating a new page to their affiliate linking policy, letting readers know that they can click on the affiliate links if they want to, but they don’t have to….

“The links are there as a convenience to you if you’re interested in whatever we’re writing about, whether we’ve said it’s fantastic or a stinking poo, and if you buy something from that store, then we get a smidgeon of cash to spend on sweets/writers. Win-win.”

While Rock, Paper, Shotgun was one of the smaller enemies that faced down against #GamerGate back in 2014 — even going as far as to ban any positive mention of #GamerGate on the site or forums — they quickly retracted their attacks against the hashtag after realizing that they were no longer significant enough to afford to lose anymore advertisers through the Operation Disrespectful Nod e-mail campaign. Not only have they refrained from speaking out against #GamerGate but now they appear to be joining the cause when it comes to better disclosure policies by making their affiliate linking policy public.

Congrats to Rock, Paper, Shotgun for doing the right thing and opting for better ethics in journalism.