Pocket Gamer Charges Devs Up To $50,000 For Guaranteed Game Coverage

If you’re an indie dev or a large gaming outlet looking to get some coverage for your title, it can be tough. In today’s competitive climate most gaming websites only want to cover big games that drive hits. Well, some gaming outlets have chosen to offer developers an alternative solution: pay for coverage.

Game Zone recently did an article about a story that’s been spreading after making its way to Reddit, where an indie developer posted up an exchange he had with the sales department representing Pocket Gamer. The exchange came after he e-mailed them to inquire about getting coverage for his title Find Yo Nuts on PocketGamer.co.uk.

The sales department explained in an e-mail…

“I work as part of the sales team for Steel Media, and was just wondering if you have any plans to promote Find Yo Nuts – because if you do, we can help.

“Don’t worry if your budget is limited – we can offer a range of options including guaranteed PR coverage […], branding, video sponsorship, and consultancy packages. We handle ads for over 70 sites including Pocket Gamer, 148Apps, Gamezebo, and AppSpy, so there’s sure to be something to suit you.“

The developer, Troy, had originally sent the review offer to the reviews@pocketgamer.co.uk e-mail address but he was responded to by the sales department, as indicated in the series of images he posted to an Imgur album.

After submitting a game to be reviewed by Pocket Gamer staff, a sales person contacts me to see if I’m interested in promoting my game. It was interesting to see a paid PR piece as part of the packages. So here is a paid review/news article linked from the sales email above.

The album contains a photograph of the pricing structure that the sales department pitched to Troy for his game Find Yo Nuts. The pricing is extremely steep, starting at $7,500 a year for four news articles, one sponsored feature and $5,000 worth of advertising across Steel Media owned properties. The top end of the partner subscription is $50,000 per year and it guarantees at least 40 news articles about your product, at least five sponsored features, and $45,000 worth of advertising across the Steel Media websites, which includes Pocket Gamer. What’s interesting is that $30,000 can be used towards site-wide takeovers and website skins.

You can check out the full breakdown of the pricing details below. 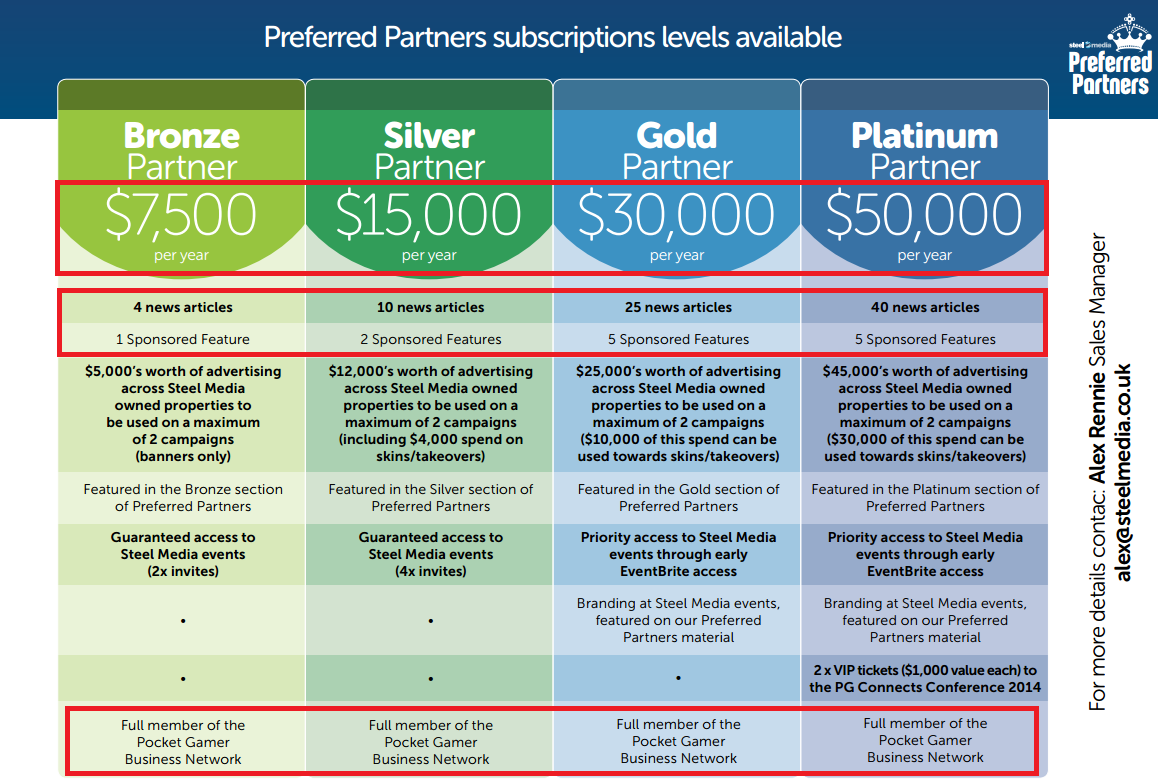 As noted in the image above, the paid-for content will see subscribers featured in the various “Preferred Partners” sections of the website(s). In the case of Pocket Gamer you can see an image of what a paid-for post looks like and the disclosure at the bottom of the piece indicating that the content was paid for by a “Preferred Partner”. 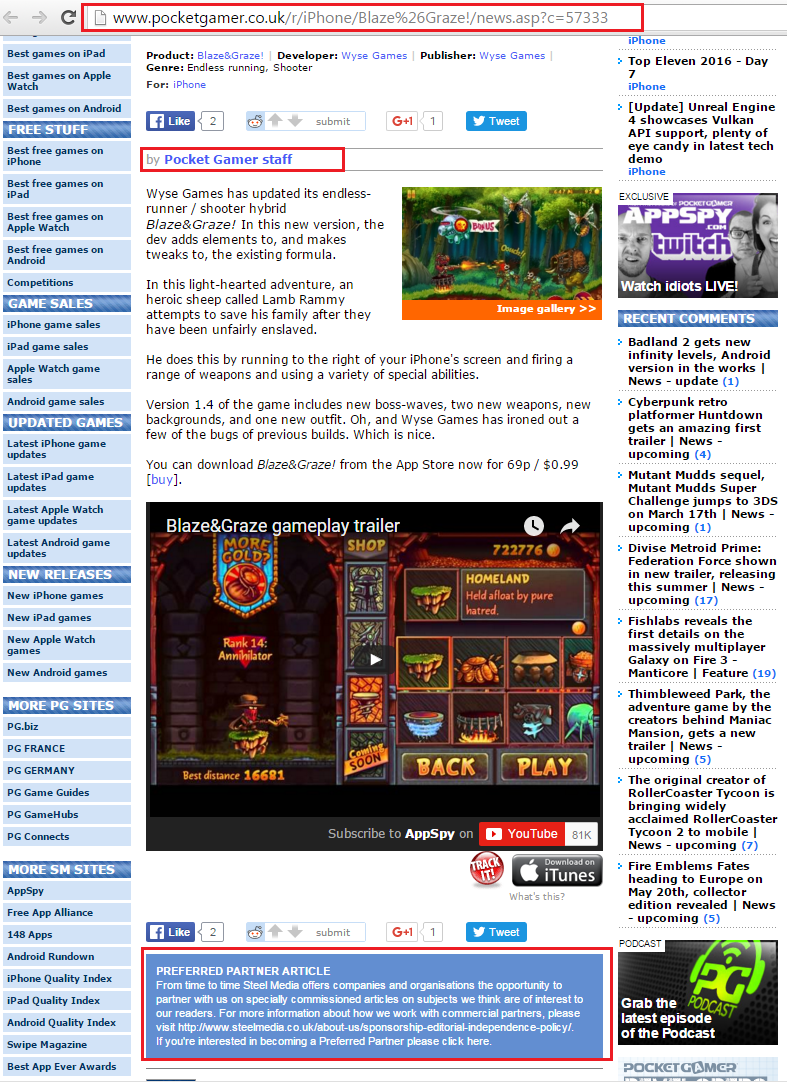 Sure enough, there’s an archive of the Pocket Gamer page for Blaze & Graze, indicating that the developers paid to have their title featured on the site. There’s a disclosure at the bottom of the page that reads…

“From time to time Steel Media offers companies and organisations the opportunity to partner with us on specially commissioned articles on subjects we think are of interest to our readers. For more information about how we work with commercial partners, please visit https://www.steelmedia.co.uk/about-us/sponsorship-editorial-independence-policy/.
If you’re interested in becoming a Preferred Partner please click here.”

Now some people are okay with this because Pocket Gamer has disclosures on the pages, news pieces and sponsored content that are paid for. Others are not okay with this because essentially they feel as if it gives Pocket Gamer a predilection of favoritism toward companies paying to promote their games. In a way, some people feel as if the objectivity of coverage and having a fair view of the product is compromised given that these companies are literally paying to keep the lights on for these websites.

This also proposes an interesting conundrum for consumers: can you trust that the reviews for games paid for by the developers will be honest and fair? It’s a question that readers will need to ask when visiting sites where some of the games they’re writing about are being paid for by the people who made them.

“If I was running a news and review site, I definitely wouldn’t want a reputation for taking money to run stories and news.

“The point of this, submitting news, press or a game to be reviewed, shouldn’t be met with a sales pitch to pay for it. Personally, I won’t be looking at Pocket Gamer for news anymore. Generating content for your site, and paying for it to be there is a double kind of ugly I don’t like.”

Harry, the reviews editor, from Pocket Gamer had responded to the issues in a separate Reddit thread, explaining that Pocket Gamer does not ask for money in return for reviews, writing…

“Not only is it unethical, it’s pretty much a waste of money.”

It’s a divisive issue for sure and definitely fits into the “ethics in journalism” discussion. It’s interesting that Game Zone took a mean dig at #GamerGate, repeating the media-fed lie that people are using the tag for harassment (although a vast majority are not) and that a real organization should step in to do something (it has, it’s called League for Gamers), but without #GamerGate a lot of people wouldn’t even have known about many of the corrupt things gaming journalists have done.

As far as spreading information the hashtag is useful, and will continue to be useful for that purpose. If game journalists weren’t feckless dastards there wouldn’t be a need for a hashtag to inform people about corruption in media journalism. Then again, since many gaming journalists are lying, ethics-free dastards and have pushed a false narrative about #GamerGate being a harassment campaign, there are places like Deepfreeze.it to remind people of just how corrupt game journalists really are.

Anyway, it’s unlikely that this topic will gain too much traction outside of #GamerGate, because the media discussing ethics in journalism is something they’ve tried avoiding since August of 2014.

8 thoughts on “Pocket Gamer Charges Devs Up To $50,000 For Guaranteed Game Coverage”