Patrick Klepek and Michael Rougeau are former members of the Game Journo Pros [Disclosure: I am also a former member]. The list was used by the biggest names in the gaming journalism ring to communicate, organize get-togethers, review parties, suggest who to hire, who to fire, and who to blacklist.

After the list was exposed by journalist Milo Yiannopoulos from Breitbart, the creator of the list, Ars Technica’s Kyle Orland, shut it down. Many gamers suspected a list like that existed but they had no proof until the leaks surfaced on Breitbart. Many more gamers believe that there’s another list out there and when you see former members regurgitating narrative talking points, it’s not hard to see why. But we’ll get to that in a minute.

Recently Nintendo fired an employee due to a conflict of interest. Nintendo sent a statement to IGN explaining why they fired the employee, stating…

“Alison Rapp was terminated due to violation of an internal company policy involving holding a second job in conflict with Nintendo’s corporate culture. Though Ms. Rapp’s termination follows her being the subject of criticism from certain groups via social media several weeks ago, the two are absolutely not related. Nintendo is a company committed to fostering inclusion and diversity in both our company and the broader video game industry and we firmly reject the harassment of individuals based on gender, race or personal beliefs. We wish Ms. Rapp well in her future endeavors.”

They don’t mention what Rapp’s second job was, but a lot of the criticism they mention spawned from the spread of the following tweet that Rapp made about child pornography years ago.

This kind of legal bullshit pisses me off https://bit.ly/qbf22r (read my IR thesis before you go hatin’ on me, kthnx).

Previous to Rapp being fired, Jamie Walton from The Wayne Foundation, an anti-sex trafficking organization, made it known to Nintendo that if Allison Rapp wasn’t fired, there would be some serious consequences, as reported by The Mirror. Walton made a follow-up tweet stating that she believed Rapp should be fired over those opinions from her thesis that she recently defended during online discussions.

Do I think she should be fired? Absolutely. Many people have lost jobs over public web opinions. But, that isn’t my call. @NintendoAmerica

Of course, the original stories that were published at both Kotaku and Playboy don’t paint the whole picture.

Before Nintendo issued the statement explaining why they actually fired Rapp, both outlets – with both writers being former members on the Game Journo Pros list – published articles containing a narrative centered around Nintendo firing Rapp due to harassment campaigns from #GamerGate.

Patrick Klepek at Kotaku published his piece about Rapp before IGN published their statement from Nintendo. He frames it around Rapp being a victim of harassment from Neo-Nazis and groups employing “tactics” he attributes to #GamerGate. He rounds out the original article by saying that…

“Nintendo was publicly silent while one of their employees was harassed and smeared online over something she did not do. That’s a fact. It’s not in dispute. Nintendo watched Rapp become the center of a witch hunt and did nothing publicly to defend her. Despite my requests for comment, the company said nothing. As it turns out, maybe that silence said everything.”

To Klepek’s credit, he later amended the article with Nintendo’s statement and did note that #GamerGate hubs had many individuals criticizing Nintendo for firing Rapp in the first place.

However, many agree that being a public face for Nintendo and using one’s Twitter account to say highly inflammatory things and expressing fringe views was not a safe thing to do.

On a Heavy article that runs heavily with the harassment narrative – and quotes many of the same individuals from within the extreme left progressive clique – one user named Redfox points out that using a personal profile to represent a family-friendly company like Nintendo to push some extremist views is not a safe bet for maintaining employment, writing…

“Fact #6: she’s a PR who doesn’t know how to keep her personal and professional lives separate which would have led to her getting canned for incompetence with or without GG. Cheers.”

Playboy’s gaming editor, Mike Rougeau, literally aggregated Klepek’s piece and then escalated it. While Klepek later went back in and amended his piece to include Nintendo’s statement, Rougeau went in guns-a-blazin’, originally stating…

“Nintendo fired Alison Rapp, a former product marketing specialist for the video game company. Rapp in recent months found herself the target of GamerGate, a hate group that’s been harassing and threatening women and other targets online since 2014.

“GamerGate’s harassment of Rapp was triggered by the hate group’s objections over changes made in certain Japanese-developed Nintendo games, including the recent Fire Emblem: Fates, as the games underwent a process called “localization.” Localization is a process by which cultural differences between Japan and the (in some ways) more conservative West are taken into consideration”

Rougeau frames the narrative that #GamerGate harassed and bullied Rapp and Nintendo until the Big ‘N’ caved and fired Rapp. No mention of the Wayne Foundation and no mention that there was a big debate in many #GamerGate containment threads about not wanting to get Rapp fired because some felt it would make #GamerGate “as bad as SJWs”.

Interestingly enough, Always Nintendo did actually include the information about the Wayne Foundation in their report, a report that is generally told through tweets with the added update from Nintendo. For the most part, they keep it neutral.

But what’s worse is that Rougeau’s article was spread around quite a bit before he later was informed of Nintendo’s comment and updated the piece. 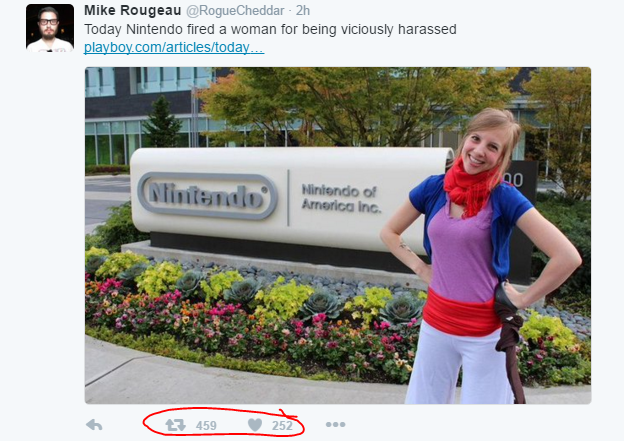 Now the good part is that both sites updated their pieces. The bad part is that misreporting that this was all an anti-feminist, anti-woman, pro-Nazi ploy to pressure Nintendo to drive women out of gaming actually spread just enough to nearly get the citogenesis effect into play.

A perfect example is Oregon Live, who also misreported on the story originally, citing Kotaku for their information. Eder Campuzano wrote in the Oregon Live piece…

“For the uninitiated, GamerGate is a collective of folks who actively harass women in the industry under the guise of crusading for ethics in games journalism.”

Campuzano went on to say…

“Rapp, a PR rep for Nintendo’s Treehouse division, was the movement’s latest target.
Their beef with Rapp? They allege she was behind the censorship of North American localization of Nintendo games such as “Xenoblade Chronicles X.” GamerGate supporters have accused Rapp of being the force behind the removal of a tool that adjusts female characters’ breast sizes in the game’s avatar creator mode.”

Despite updating the piece with Nintendo’s statements, Campuzano still maintains some of the original narrative and even gives away that his story was largely based on Kotaku’s piece. The Oregon Live writer states…

“Kotaku’s Patrick Klepek points out in this excellent (and lengthy) piece on online harassment, Rapp doesn’t even work on the localization team. She’s just been open about her feminist views online and supported social justice causes. You know, stating her opinion and such.”

Now if there was an organized campaign by #GamerGate to get Rapp fired, it would have been nice if Kotaku or Playboy provided some links or photos or quotes. The only thing they seem to point to is the Neo Nazi website, which is the equivalent of a media outlet saying Hillary Clinton supporters are preventing Donald Trump from getting into the White House by linking to ISIS propaganda.

While it seemed like a hot story to rush to publication, there is no reason why other sites couldn’t have just waited for Nintendo’s response, which came fast and swift. In this case, IGN played it right by only including the relevant information they could prove and the information that was relevant to readers.

It’s dangerous when large websites focus on telling a narrative first before getting all the facts. We can easily see how both Kotaku and Playboy utilized their platforms to tell completely contradicting stories to what Nintendo stated. Whether or not what Nintendo stated is true would require further investigation.

The scary part about this is what would have happened if IGN had waited a day to post Nintendo’s response? We would be looking at another “Gamers Are Dead” barrage with one site after another repeating misinformation while peddling sociopolitical propaganda.

[Update:] Additional tweets from Rapp confirm that Nintendo did indeed fire her for her second job. Archives of the tweets are available where she states…

“Moonlighting is actually accepted at Nintendo. It’s policy. To pay off student loans (weeee), I started moonlighting under a fake name, and with no real identifiers.

“An anon found out, told [Nintendp], and here we are. It was moonlighting Nintendo didn’t like, despite the fact that it was anonymous.”

Various links have been made to some risque photos of Rapp with Nintendo products. According to some observers, they believe that Rapp being paid to model in non-family friendly situations while alluding to those risque photos on her official work account could be what led Nintendo to their decision.