Payday 2‘s Starbreeze Entertainment and film studio STX Entertainment have teamed together to release some new DLC packs for Payday 2 on March 31st.

There will be six pieces of content for Payday 2, including a new character, two new maps, four new weapons, 10 new achievements, four new masks, four new patterns, and an all new perk deck.

To help bring the DLC pack to life, Starbreeze and Overkill worked with one of the stars from the Hardcore Henry film, Sharlto Copley. You can check out Copley in the Payday 2 short film below that introduces players to the new Jimmy character and some of the content in the Hardcore Henry DLC pack for Payday 2.

The Elephant acts as a middleman to facilitate a job for the PAYDAY gang and has set a meet with Dallas to talk details, but things quickly go south. Finish the job next week! Starring: SHARLTO COPLEY as JIMMY, ERIC ETEBARI as DALLAS, DAMION POITIER as CHAINS and BOKEEM WOODBINE as THE ELEPHANT.

The above short film was directed by Hardcore Henry’s own director, Ilya Naishuller, who explained on the Overkill website…

“The Elephant acts as a middleman to facilitate a job for the PAYDAY gang and has set a meet with Dallas to talk details, but things quickly go south. Finish the job next week!”

That short film is pretty badass.

I have absolutely no idea what was going on or why, but it seems to tie into the film in ways I can’t explain.

The shooting and squib work is top notch, though. Naishuller has a nice throwback style in the action sequences that are reminiscent of the old Bruce Willis, Steven Seagal and John Woo films – back when squib work meant something. 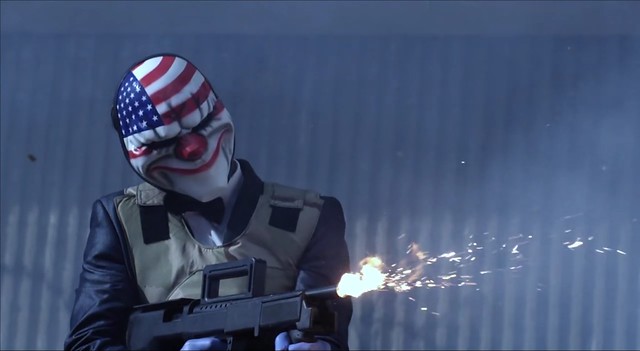 “It’s been a long-time dream of mine to gain a great movie collaboration for PAYDAY 2 and have the director of the movie intimately involved in creating a live-action piece for the game. I’m so psyched to have Ilya direct our Payday-crew and introduce Jimmy in such a bombastic way,” […] “We’re ecstatic to be able to expand our entertainment industry cross collaborations with this STX Entertainment partnership.”

They don’t really describe what the maps are like but since they’re free, does it really matter?

As an added bonus anyone who purchases tickets from Movietickets.com to go see Hardcore Henry at theaters will receive a free code to get a copy of Payday 2 with the Hardcore Henry DLC pack.

I mostly stopped playing Payday 2 because all the DLC started to feel like a cash grab, and it left me behind the way Borderlands 2 and Dungeon Defenders did. Nevertheless, it’s still a fun game if it can just crawl through the feces mountain that is DLC practices under which it is buried, and maybe it’ll be fun again.

Anyway, you can’t go wrong with free DLC so you don’t lose anything if you already own a copy of Payday 2. You can learn more about the DLC content for the PC version of the game by hitting up the official website.