As pointed out by Gematsu, the other two characters are brand new additions to the game, including the sexy Luong who uses her long legs to whip out some mean combos and a lot of leaping takedowns  techniques using her legs. It’s a little bit like a mix of French foot fighting and some forms of Thai kickboxing. Her style is unique and I would love to see more of it. You can check out the quick glimpses of each of the three characters in the trailer below.

Nelson looks stupid. Let’s get that out of the way first. The haircut, the tire-print yellow boxing glove and the outfit just looks stupid.

However, Nelson’s fighting style is almost identical to Heavy D’s from the earlier King of Fighters titles. I was hoping we would see a character like Heavy D (if not Heavy D himself) in King of Fighters XIV, but I can definitely make due with Nelson as a replacement. A lot of his in-fighting combinations and hard-hitting hooks and overhands look good. His combos seem fluid and could be a heck of a lot of fun to use in the game.

I’m going to go out on a limb and say that Nelson is likely going to be ranked as a low-tier character who ends up becoming popular in the FGC tournament scene after being adopted by a high-tier player. He has that underdog vibe going for him. 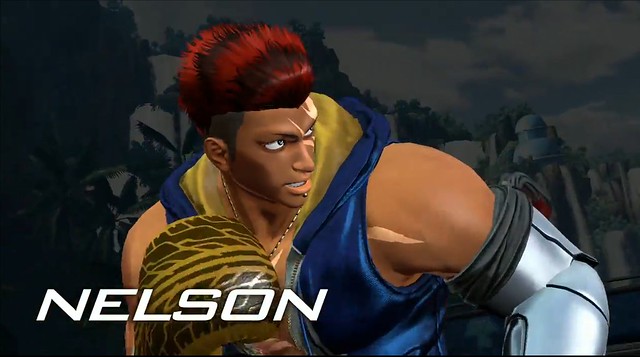 Athena, alternatively, is typical as ever. Her schoolgirl uniform is no surprise and her psychic abilities are back and will likely be as annoying as ever. She was never a favorite of mine but a lot of other fans enjoy her appearance in each of the KoF outings.

Still, no release date has been set for King of Fighters XIV but the game is coming along nicely enough and the roster easily has me intrigued, despite some of my old-time favorites not making the cut.

6 thoughts on “King Of Fighters 14 Trailer Unveils The Sexy Luong, Athena And Nelson”