How South Korea’s Government Is Destroying The Korean Gaming Industry

South Korea used to be a bastion for gaming at one point. Between 2000 and 2011 the South Korean gaming market boomed with a strong mixture of MMO theme-park clones and some original titles like Gunz: The Duel, Ragnarok Online, Rose Online and Fly For Fun. However, you may have noticed that the frequency of South Korean MMOs have slowed down greatly over the past few years. A lot of that is due to the strict regulations, limited tax breaks and curfews that the South Korean government have applied to the industry over the past five years.

Tensions in the gaming industry have escalated quite a bit in South Korea over the topic of addiction; this is despite the fact that South Korea is considered the e-sports capital of the world. In fact, the perceived addiction to gaming is what has caused a change in the way the South Korean Ministry of Culture and Ministry of Gender Equality and Family have aggressively gone after the gaming industry within the region.

While it was admirable that the Ministry of Culture called out Blizzard back in 2012 over Diablo 3’s Real-Money Auction House and its potentiality for gambling addiction, as reported by IncGamers, there was a lot more brewing under the surface regarding regulation, discussions about addiction, and video game youth restrictions.

In a report by Bloter back in 2013 they explained how South Korean District Representative Hwang Woo-yea stated that internet gaming addiction affects up to 470,000 people in South Korea and claims that addiction overall in Korea makes up for 6.7% of the population.

The District Representative and the Ministry of Gender Equality and Family also stated that video game addiction is one of the “4 of the Evils” plaguing South Korean society, along with gambling, alcoholism, and drug addiction.

Hwang Woo-yea has managed to get into the ears of Senators to push for a bill that introduced the Game Addiction Prevention Act. Some of the Senators believed at the time that before such an act could be made widespread that they should “expand the argument that (video games) sales be stopped” while they evaluated the “concept of addiction causing substances” like video games.

The Game Addiction Prevention Act was debated for years, and many actually argued on behalf of games given how big the e-sports scene and gaming is in South Korea, as reported by CNET back in 2014. However, the debate was lost just this past year in late February, 2016, as This is Game reported that the Korean Health and Welfare Department are looking to define careers in video games (likely related to e-sports) as an “illness job” and that they will need to monitor and continue to research the industry in relation to addiction. 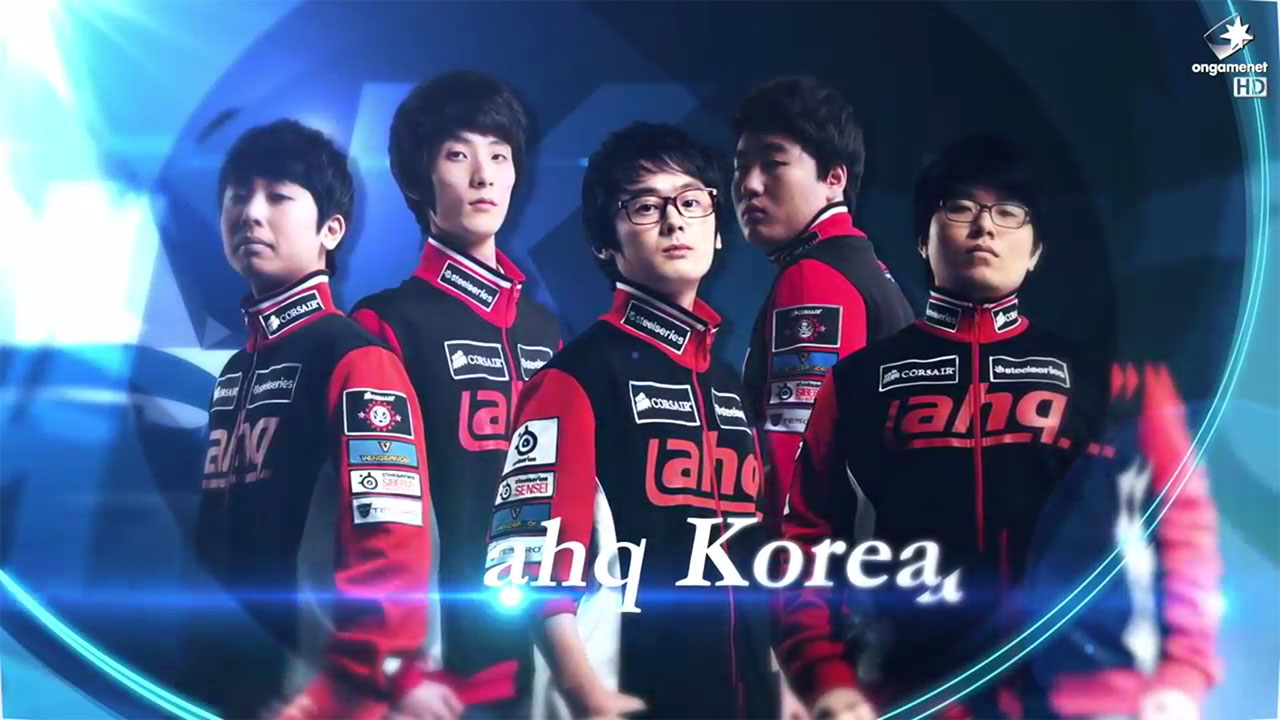 According to an article published this past March on Geksake, it notes that the addiction levels in South Korea have been labeled by its government as having reached more than half a million…

“South Korean Internet Game Addiction and population had reached 680,000, for which the South Korean government will allocate 5.4 trillion won of funds (about RMB 30 billion) per year for social and economic governance and management”

Much like China, South Korea already has militarized rehabilitation faculties, as reported by Business Insider. Those found to be addicted to gaming are required to attend these rehabilitation centers so they can be “cured” and reintegrated back into society.

Some suggested that perhaps the problem isn’t gaming or the kids, but perhaps the problem of video game addiction is a result of poor parenting. The Korean Government has neither acknowledged nor commented about the issue of poor parenting being the cause of video game addiction, in spite of the fact that there were cases like the one reported by Newsweek back in 2014, where they noted how two parents in South Korea let their kid die of starvation because they were too busy gaming.

Instead, a report from Korean gaming site Hungry App states that the continued debate over game addiction being labeled as a medical illness in South Korea has the Department of Health and Human Services wanting to monitor video game and smart phone usage from infants up until college level to look for signs of addiction and, if necessary, take manual action to intervene and prevent a possible case of addiction “illness”.

The South Korean Ministry of Health and Welfare have essentially likened video game addiction to something they see as “poison control”.

The regulations that were amended in 2014 actually already saw various publishers begin to shift their focus abroad, especially with relocation and service operation being setup in China instead of South Korea.

According to the Hungry App report, some of the publishers slowly abandoning the South Korean market include Nexon, NCSoft, Netmarble, and Smile Gate. Some publishers also fear that the tax cuts they receive for publishing in South Korea may be affected by the additional funds that the Ministry of Health want to invest into monitoring and regulating video game addiction with extreme prejudice.

The article notes how dangerous a precedent this all is given that gaming accounted for 0.9% of South Korea’s youth employment in 2012, but with introduction of some restrictions such as the Shutdown Law that passed in 2011, the youth employment in gaming dropped to 0.87% in 2013, and they expect those numbers to further plummet as regulations increase, thus driving out more publishers, more jobs for the youth, and more revenue from South Korea.

Even more than that, the Korean Economic Institute also released a report showing that video game enterprise in South Korea has dropped by 47% between 2009 and 2014, following the implementation of stiff regulations and restrictions instituted by the South Korean government, as noted in an article by News1, which was published in early February of 2016.

According to an editorial published last October in 2015 by Naver Sports, they reiterated what was mentioned above, stating that jobs in the gaming industry within South Korea are “plummeting”. They go on to note that the requirements from the Ministry of Gender Equality and Family and Culture Ministry to implement and enforce the Shutdown Law – which sees youth 16 years of age and under being unable to play games or attend PC cafes between 12:00am to 6:00am, unless their parents specifically request for the law to be lifted for their child – has cost the South Korean gaming market more than 1 trillion won, according to estimates from the Korea Economic Research Institute. This equates to approximately $860 million in USD.

The Shutdown Law not only affects cyber cafes and PC gaming at home, but Sony and Microsoft were also required to check the ages of the users logging in, and shut down PSN and Xbox Live at night for those under 16 to comply with the South Korean law, as reported by Game Revolution. 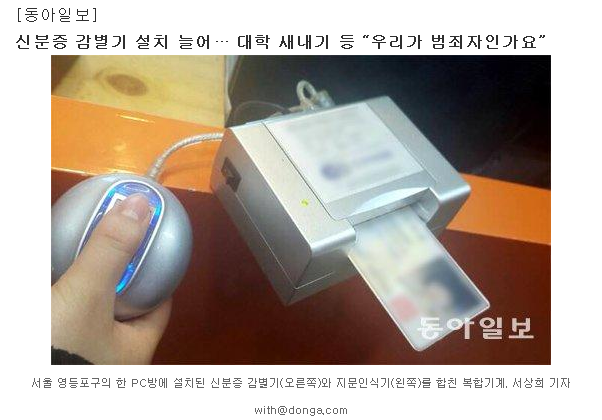 Things have become worse yet for the youth of South Korea, as they’ve begun mandating that PC cafes start using expensive new fingerprint scanners and ID card readers. In a report from Naver back in January of 2016, they followed a 19-year-old Mr. Kim who wanted to go out drinking with friends and possibly hit up the local PC cafe. Kim has plans on attending college later this year. However, when he attempted to enter the cafe he was required to have his fingerprint scanned and his ID card read. Mr. Kim was denied entry because according to the cafe owner, in order to enter into the establishment youth “requires a high school diploma”.

That’s right, if you don’t have a high school diploma you will be denied entry into a PC cafe. Mr. Kim stated that the ID card reader and fingerprint scanner made him feel like a criminal.

According to the article, these fingerprint scanners were used originally in pubs, bars, nightclubs and stores that sold tobacco. However, with the new laws and government crackdown on video game addiction, they’re specifically targeting PC cafes in an attempt to curb those under 18 from dropping out of high school.

The article goes on to state that the fingerprint scanners are becoming mandatory since police can raid PC cafes if they find out that they are allowing in youths unlawfully. For the first offense there’s a 500,000 won fine, which is just a little under $450 USD. If a PC or cyber cafe is caught more than three times servicing youth unlawfully, they can be shut down.

If you think that things are any easier in the indie scene in Korea, you’re gravely mistaken. Indie developer Somi, who made the game Retsnom that’s currently available on Steam, describes in a blog post the difficulties and the multiple steps in getting registered and approved to release an indie game in South Korea. The blog post covers a step-by-step process in interacting with the different government institutions and hoops that had to be jumped through to get certified to release the game in South Korea.

Ultimately, there is no safe haven in South Korea for gaming. The mainstream industry is hampered by stiff regulatory restrictions, the PC cafe scene is bogged down in identification policies, and the indie scene is blockaded by bureaucracy.

Sadly we’re witnessing one of the four largest markets in the gaming industry rapidly fall off the map after growing and expanding so fruitfully throughout the early aughts. The anonymous Korean gamer who notified me about the issues in South Korea and sent the links over about these issues isn’t alone in feeling disgruntled at the overbearing regulations within the region, but sadly these gamers don’t seem to have anywhere to turn to fix an industry that their government is constantly breaking.