Gremlins, Inc: How To Use Cards

One of the new games that have been making waves on Steam is a turn-based, strategic board game called Gremlins, Inc. Think of it as the Game of Life meets Sorry. The objective is to win by a number of means and utilize a deck of 164 cards to either make the lives of other players miserable or gain proliferation through your own machinations.

For players looking for a little bit of an understanding of how to make use of the cards and how to play Gremlins, Inc effectively, there are some beginner guides and walkthrough guides available that offer some hints and tips on how to get started in the game.

This is the 1st video in the TUTORIAL series, introducing the basics of the game: what is your avatar, how do you move around the playing field, and what are the basic game indicators. Gremlins, Inc. is a turn-based digital board game strategy coming out on in early access in September 2015 (Win/Mac, €9.99/$9.99/£6.99/R499, EN/DE/FR/ES/RU).

You start with six cards and each card can be used for two different purposes. The first purpose is to move around the board, this is indicated by the dice in the top left hand corner of each card, which shows how many spaces you can move with that dice.

Every time you use a card to move or as an action, it will use up that card and swap it out for another card. You can see an explanation of the way the cards work with the video below from Charlie Oscar.

Gameplay basics of Gremlins, Inc. (beta 120): moving around the playing field, playing action cards and using some of the locations (the Bank, the Casino, the Office, the Plant, the Market and the Dump). Gremlins, Inc. is a turn-based digital board game strategy coming out on in early access in September 2015 (Win/Mac, €9.99/$9.99/£6.99/R499, EN/DE/FR/ES/RU).

As you move through the board and gain votes, you can actually stock them up and sell votes for money by heading to the office. You can also invest $50 worth of coins into the bank for a $10 coin extra increase when you pass over the income icon.

Some cards cost a certain amount of money in order to play them. They can range from costing nothing to play to costing hundreds. Usually the more you pay to play a card the better the results of the card when played as an action.

You might be wondering why you would want to pay money to play a card, well one benefit of paying to play a card is to gain score for using the card. If the game’s win conditions are based around score, then it’s important to spend money to gain score. 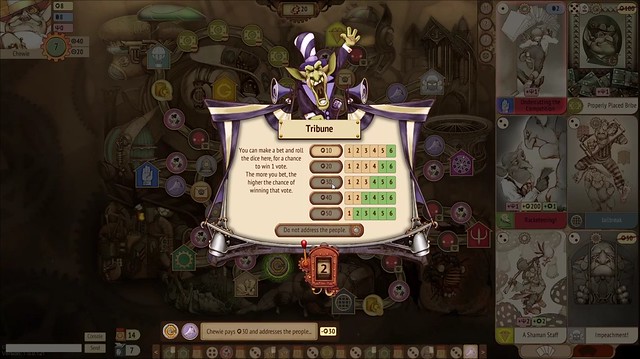 You can also make bets at the casino, but winning and losing is a 50/50.

You can also become governor via winning votes. The player with the least amount of malice gains three extra votes, but it doesn’t mean that they’ll win. Additionally, players who win the election and become the governor does not have to pay bribes and doesn’t go to jail. The objective is to win either by score, by time, or by rounds.

You can purchase Gremlins, Inc right now over on the Steam store for only $14.99 or learn more about the game by visiting the official website.