With the March 24th release date drawing ever so near, Koei Tecmo is continuing to release promotional trailers for Dead or Alive Xtreme 3, which is due for release on the PS Vita and PS4 in Japan and Asia.

The latest trailer for the game focuses on Ayane’s well endowed… curves. She doesn’t bounce and jiggle quite as much as some of the other girls but the trailer is definitely fixated on the dual lumps that roll up her upper thighs. You can check out the trailer below, courtesy of Eurogamer Portugal.

The trailer starts off with Ayane relaxing on the beach, and moves on to her all wet in the pool, where we get a clean shot of her backside. There’s a quick clip of her kicking and frolicking in the water before moving on to the voyeuristic and risque shot of her crawling in the sand.

If you think that the trailer tries to keep it safe for work, think again, hombre. Despite the clip of Ayane in the sand cutting off before it circles around to her butt perked up in the air, the next clip shows her spreading her legs wide open so you get a clear view of… everything.

We then get a clip of the ninja warrior in a series of bikinis, along with a very clear shot of her cheeks in an equally cheeky one piece swimsuit that leaves little to the imagination. 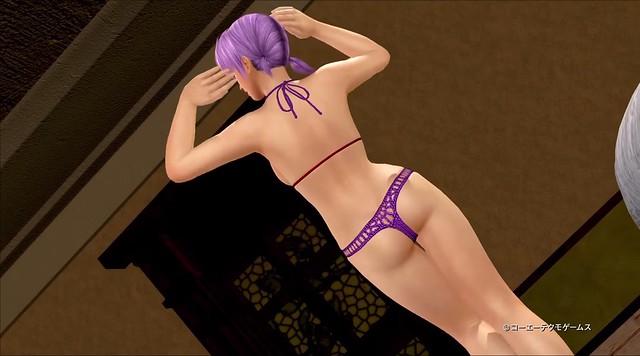 Anyone worried about censorship or Koei Tecmo holding back need not fret. Koei Tecmo is going all out on this one.

It’s also obvious why Dead or Alive Xtreme 3 can’t come to the West under the current political climate. American men adopting Frankfurt Marxism under the SJW banner are just too beta to deal with all the curves in the game. It’s like trying to get an American drag racer to drift in a Supra or a Japanese drifter to drag race in a Challenger; it’s just too much for them to handle. In this case, women with curves are just too much for the beta males, so for them it’s censorship …or bust.

If you’re a real man and you can handle real curves, figuratively speaking, you can look for Dead or Alive Xtreme 3 to launch on the PlayStation Vita and PlayStation 4 on March 24th. You will have to import the game from Japan if you plan on playing it in the West, so feel free to visit Play-Asia.com to fulfill that request.