Black Desert Online has already found itself a strong following of gamers looking for something very different from an MMO in order to experience something that isn’t a typical Korean theme park game. Well, some players seem to find all of the game’s unique features to be a bit overwhelming, but some helpful gamers have put together and a tips and hint video to help lay out some of the basics for getting started.

Youtuber Fevir offers 10 starting tips for beginners, helping them get their bearings down in Black Desert Online by running them through some of the basics for understanding how the game works and what to look out for when starting out. You can check out the video below.

Black Desert Online is a huge game and with it’s release there is a lot to learn and hopefully these tips can get you on the right track with 10 quick tips to help improve your experience. If you have any tips or tricks to add- go ahead and throw them in the comments.

Mess with the graphics options. You can change the contrast, brightness, color, saturation, bloom, bokeh depth of field and more. It seems like common sense but it’s mentioned that this is a good replacement for mods like Re/Shade.

Watch your weight. Due to the game’s inventory limitations a large part of the weight is taken up with potions. It’s suggested to either sell the potions or store them for later use. Additionally, you can lessen your weight by selling turn-in items. These items may not be attached to quests but by right-clicking them and going to the map screen, there’s an indicator showing where you can turn in the items to the appropriate NPC.

Energy is consumed for non-combat activities and in order to replenish it exploration, quests, talking to NPCs with icons over their heads or learning something new for a trait all contribute to the knowledge pool, which in turn contributes to a character’s energy.

One of the more interesting aspects of the game is that creating alts that share a family name also means they can share other things as well, such as feeding pets on one character can replenish the food on a pet on another character. It also means that they can also share inventory storage as well, which is great for resource management or crafting. 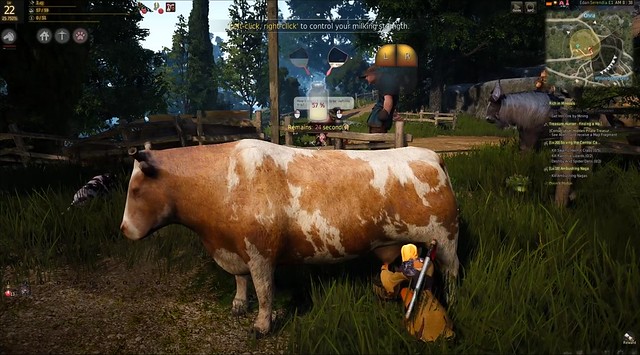 Fevir suggests not letting the energy cap and to always spend it to keep it from going to waste, whether that’s in fishing or managing NPC workers and nodes, or even doing the Amity mini-game with NPCs, which can result in gaining special discounts on items or unlocking new buffs for your character(s).

It’s interesting but the final tip is that Fevir suggests players to join a guild to get the most out of the game because guilds are just going to have more to share than what gamers will be able to learn traveling around on their own trying to hoof it as a lone wolf.

Black Desert Online is available right now for PC. You can learn more about the highly popular MMORPG by paying a visit to the official website.