Techraptor spotted the latest update on Yandere Simulator from over on the game’s official blog, where the developer revealed that he’s slowly adding new weapons to the game but only when they have animations to match. Well, he’s added a new animation and it consists of splitting the school students down the middle with a circular saw. It’s a gruesome bit of fanfare that’s not for the squeamish. You can check out the dev diary below to get a look at the new saw attack and dismemberment feature.

The next “big” feature isn’t 100% ready yet, but I don’t want you guys to start worrying that I’ve stopped working on the game, so here’s a video about the progress I was able to make within the past week. Visit yanderedev.wordpress.com for more information about the game!

It wasn’t all torture-porn that made it into the update, though. There are new ways to dispose of student bodies, such as dumping them off the rooftop of the school where the railing is low, as well as being able to scoop them up and run with them to a designated location after you’ve increased your physical training to a high enough degree.

If you don’t have your physical traits up high enough, dismembering the students that you kill allows for quickly moving their body parts around to dispose of them, such as throwing them off the roof and quickly lobbing the parts into an incinerator. 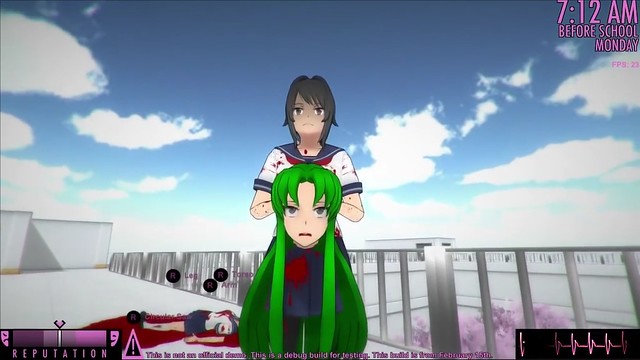 The game has always straddled the borderline between implied violence and outright violence, but here we see that the developer isn’t afraid to step over the line to enter into Mortal Kombat territory.

Some of the comments on the YouTube page do note that they could understand why Twitch might have the game banned, and some warned the Yandere dev not to go too far with the gore for risk of being ostracized, but at this point once you get banned from Twitch does it matter anyway? It’s unlikely to ever get a console release so an ESRB rating is pointless and it appears Yandere Simulator will forever live on as a niche murder sim in the far corners of the interwebs.

Regardless, you can stay up to date on the game and how the developer plans on tying in the new dismemberment feature with a student club and the incinerator by visiting the official website.