The first part of the three part mini-series starring Michonne from The Walking Dead is available right now for home consoles and PC, it’s called “In Too Deep”. There are already a variety of gameplay walkthroughs available covering both the “good” choices and the “bad” choices in the game.

There are some fairly varied choices throughout the game that players will be able to make. You can see the “good” choices made in the walkthrough made by YouTube outlet MKIceAndFIre.

There are a few puzzles in the game and after going through the preset intro sequence where you hack and slash some zombies in a flashback sequence, the game puts players in the role of Michonne and requires some tweaking on the radio after making a few choices. You can easily find the right frequency on the shortwave radio by turning the dial on 16.

The entire sequence thereafter is mostly interacting with a few points of interests around the boat, including the crew.

After the segment involving Michonne and Pete getting attacked in the boat, they end up on another boat. There’s a piece of rebar in a chest that can be used to open up a hole in the shutters on the door. 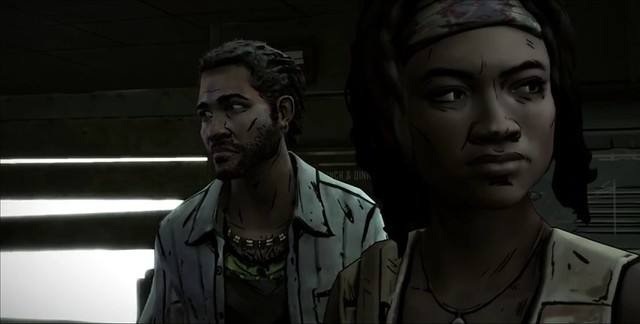 There are a few places to search around in the boat, including a door with a zombie on it strung up and disemboweled. Inside the room there’s a duffel bag on the table with supplies inside. You can search through the duffel bag and add some extra stuff to it. With the locker that starts banging, you can either choose to stab it or open it. Inside is a kid with a gun. After fighting off the zombies there’s an option to to either let the girl go or try to take the duffel bag back.

After getting captured by Randall and tied up in a basement area it’s possible to either fight back or do nothing and wait.

There’s a series of questions that Michonne will be asked and then she ends up having to tell whether or not the kid Greg is telling the truth when he’s cross-examined.

A series of alternate choices are made in a completely different walkthrough that MKIceandFire did just to show how some of the scenarios could have played out.

The first part of the three-part mini-series called “In Too Deep” is available right now. You can look for the second episode in March and the third episode goes live in April. The Walking Dead: Michonne is available for $14.99 on the Xbox One, Xbox 360, PS3, PS4 and will launch soon for mobile devices.