If you want to see the final battle sequence between Naruto and Sasuke in Bandai Namco’s and CyberConnect2’s Naruto Shippuden: Ultimate Ninja Storm 4, prepare to hold on to your butt and watch half an hour worth of fighting and cinematics because the ending is a doozy.

YouTuber FJMGaming let the ending loose for all to see. It comes after a very lengthy story mode is completed. Naruto Shippuden: Ultimate Ninja Storm 4 is available on PC, PS4 and Xbox One, and follows very closely to Shonen Jump’s manga. You can check out the 31 minute video below. Obviously there are spoilers ahead.

The final fight ends with Naruto and Sasuke losing an arm each – although to maintain the ‘T’ for Teen rating CyberConnect2 wisely turned the blood into black goo. I do wonder if it’s the same in the Japanese version?

But if you’re also interested in seeing the game’s full story mode sequences without all the lengthy fights in between, YouTuber Freex3r has a seven hour – yes count it, seven hour – video featuring all of the cinematics rolled into one from start to finish. It also includes the exclusive anime sequences that were interspersed in between the 3D CG and the cel-shaded gameplay. If you’re only interested in the plot, then you can check out the story compilation below. It’s like binge watching the anime and manga via a bootlegg, makeshift version of Netflix.

The complete story of Naruto Shippuden Ultimate Ninja Storm 4 including all cutscenes and all boss battles. Subscribe 🙂 I tweet stuff: https://twitter.com/Freex3r

The video above doesn’t necessarily teach you how to do each of the Ultimate Jutsus secret techniques, but it does show you what each one looks like in action for every single playable character. Naruto has quite a few specials at his disposal. The other characters? Not so much. Most of the main characters have about three specials.

The Ultimate Jutsus video clocks in at half an hour, first because the special moves are all over-the-top and two because there are a ton of playable characters in the game. 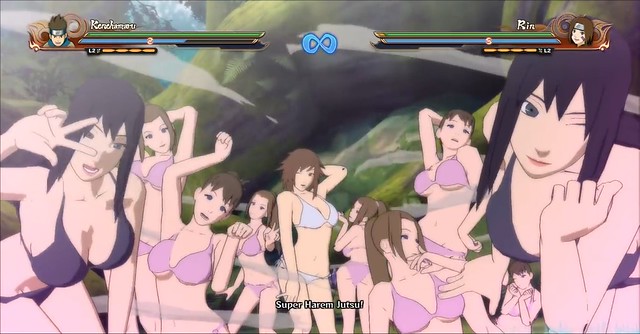 The Jutsu above with all the harem girls also has a reverse one with a bunch of gigolos. In fact, there’s even a video recently posted floating around that features all of the female reactions to the shirtless guys in what’s called a “Reverse Sexy Jutsu”.

It may sound stupid but you can check out the compilation clip below, featuring all of the Naruto ladies getting an eyeful of upper-body man meat. Check it out below from YouTuber PS360HD2.

Only added the ones who had a reaction! Hinata, Temari & the other do not react! Subscribe to my New Gaming Channel PSXBHD – https://www.youtube.com/PlaystationXboxHD Sub for more Naruto Shippuden Ultimate Ninja Storm 4, Attack on Titan, One Piece: Buring Blood, Dragon Ball Xenoverse ! Apply to the Fullscreen Network!

And if Jutsus, endings and cinematic movies are much to your flavor, there’s just a traditional gameplay walkthrough that covers the story mode from start to finish for you to absorb.

In fact, you can check out all 22 parts of the story mode compiled together in a lengthy and nifty playlist by YouTuber Tetra Ninja. It’s just around six hours or so, meaning you’ll have to carve out quite a bit of time to indulge in the lengthy mode. This is in addition to the other standard tournament, online and free-play modes. Check it out below.

Naruto Shippuden: Ultimate Ninja Storm 4 is available right now for the Xbox One, PS4 and PC for $59.99. You can learn more about the game by paying a visit to the official Bandai Namco website.