Chronicles Of Elyria, MMO Where Your Character Ages Targets Spring For Kickstarter

An MMORPG where your created character can age, get injured and die, is targeting spring for their Kickstarter based on the latest update on the website. They’ve recently managed to surpass 25,000 registered members and they’re gunning for 50,000 registered members before getting serious about their crowd-funding initiatives.

In today’s age you can’t trust that media will simply report on your game without turning it into some kind of social media nightmare filled to the brim with Twitter arguments, a circus of Facebook debates and hashtag wars on Tumblr. The developers at Soulbound Studios have decided to build up their own community first through grassroots means, spreading the word about Chronicles of Elyria through posts and images on various aggregators and image boards.

They recently had a massive influx of created accounts thanks to a post on Imgur. In a recent update over on their official website, creative director Jeromy “Caspian” Walsh wrote…

“When we saw that January was coming to a close, but knew it was too soon to launch our Kickstarter, we set another internal goal of having 50k accounts by the end of May. When we first did that it seemed aggressive, almost impossible that we’d be able to more than double our accounts in just half the time.

“But, after having seem the community’s response to Rahunei’s post, we’re convinced that with more screenshots, our upcoming game-play videos, tech videos, and offline playable demo, with your help we can easily achieve our goal of 50k accounts by the end of May.”

So the Kickstarter has been moved out of January to some time in spring, presumably in May? They don’t say how long after they hit 50,000 registered members that they plan on launching the Kickstarter but it sounds like it’s going to be somewhere within that vicinity.

The real highlight of the post is that they will be launching new videos and gameplay trailers in late February and March to help give gamers an idea of what to expect from the upcoming title. 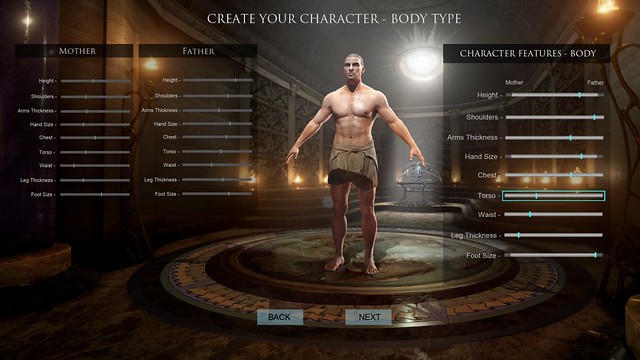 So what makes Chronicles of Elyria any different from other MMOs out there? Well, a large part of it will be on the emergent, player-driven gameplay. It sounds like it could be similar to Mortal Online, where sandbox-style progression will be one of the core foundations of the gameplay.

Players will create a character who will age, undergo hardships and eventually die. Part of the objective is to move up in the ranks of the game world and potentially even become king/queen. If you’re not interested in attaining power over others, the game lets you develop a classless character who can become practically anything you want, from a blacksmith to a warrior to a wares seller.

The developers also discuss some of the player-generated content they have planned for gamers to utilize, which they cover in a video interview with DM21 Gaming that you can check out below.

Our 9th Deep Dive into Chronicles of Elyria covers Player Created Dungeons! Joining me is Ace and Tyler Gesselman! Chronicles of Elyria Website: https://chroniclesofelyria.com/ User my refer code to sign up: 46896E Be sure to check out the rest of the channel! Join us on our Social Networks!

Graphically the promotional images look good but a lot of the appeal of Chronicles of Elyria will depend on how well the combat mechanics will work. We’ll likely get to see those soon enough when the new promo materials go live. You can learn more about Chronicles of Elyria or sign up to stay abreast of the game’s development by visiting the official website.

One thought on “Chronicles Of Elyria, MMO Where Your Character Ages Targets Spring For Kickstarter”