NCSoft may have gone back on their word about an uncensored version of Blade & Soul coming to the West (perhaps inadvertently due to the localization team taking over) but that hasn’t stopped the game from easily surpassing 2 million registered users in North America and Europe.

The milestone is being celebrated with a number of new content drops, including brand new dungeons and missions for up to six players adventuring together in a party. With new skills and abilities added to scale beyond level 45, NCSoft has introduced some new raid levels into the game, mentioning in the press release…

They’re also introducing a shift from the PvP pre-season into the PvP full season. This is coupled with a new UI to help players gauge their progress and skill that will ultimately earn them some rare loot during the competitive season.

But that’s not all… oh no, there’s more… much more. 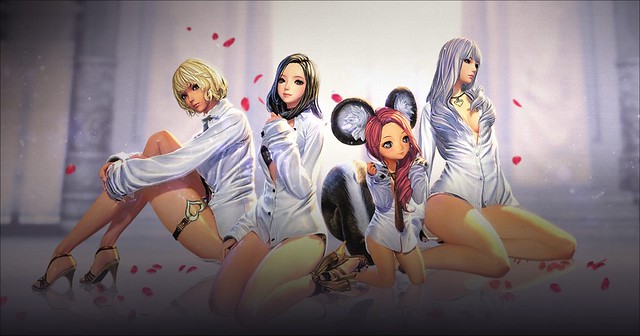 Blade & Soul – if you haven’t been able to guess from the very becoming picture above – is also celebrating the season of love. Yes, there will be special Valentine’s Day events and gear made available in Blade & Soul throughout the rest of this week. They detail it over on a brief post on the official website, where they reveal limited, timed-bonuses that are available in dungeons, along with limited-time-only costume bundles for the females and males. The female outfit is the one you see above in the image. The male outfit is a cheap looking pimp outfit with a tacky red and white suit and pinstriped slacks with a button-up vest. It’s called the “Lover Boy” costume.

You can learn more about the new quests, dungeons and outfits by hitting up the official Blade & Soul website. It’s unfortunate the game was butchered by the Western localization team, but at least there are naughty lewd mods to compensate, eh?