PQube Games announced that they will be handling the European release of the upcoming tower-defense, visual novel game from Aksys. The title is scheduled to release on March 15th, 2016 in North America for the PS4, PS3 and PS Vita, and now it’s scheduled to release sometime in the first quarter of 2016 in Europe.

The game reminds me a heck of a lot of Evangelion meets Missile Defense. Players will take control of the city and build up the resources to protect it against giant monster attacks. As mentioned in the press release…

“Aegis of Earth is a dynamic tower defense game with a story delivered in a visual novel-style. Defend the last bastion of humanity against an onslaught of monster attacks. From a central citadel – the player assumes the role of military leader charged with creating, developing, and updating a city with weapons and defences, balancing and aligning the city’s resources to better survive against prolonged monster attacks.” 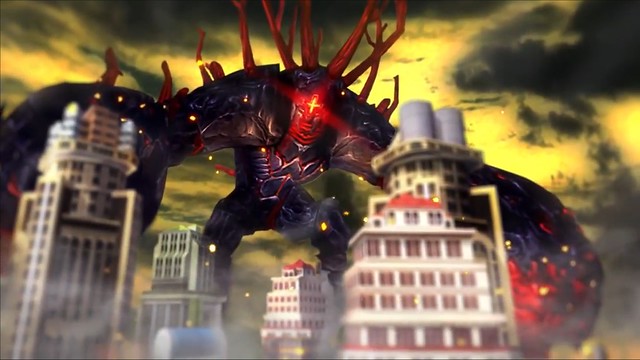 The art-style is really something… but what really helps this game stand out apart from kaiju attacks and utilizing an entire city to fend itself off from consistently aggressive, larger-than-life creatures, is the fact that there is an actual story underneath it all. According to the press release, Acquire has a visual-novel style presentation for the plot that unfolds as players become acquainted with the characters and gain skills in better defending the city.

There’s a trailer floating around that gives you an idea of what to expect from the actual in-game play. You can check it out below, courtesy of Use A Potion.

With 50 different enemy unit types to destroy, plenty of characters to unlock, a chapter-based story mode and lots of firepower to dispense against Godzilla’s unemployed cousins, you’ll possibly have a decently good time with Aegis of Earth: Protonovus Assault, especially if you’re looking for a strategy-oriented rendition of Earth Defense Force.

You can look for the game to go live in North America on March 15th for the PS3, PS4 and PS Vita. The game will also be available around that time in Europe courtesy of publisher PQube. For more info feel free to visit the official website.