NetherRealm Studios recently announced that Mortal Kombat XL is coming for the Xbox One and PS4 starting March 1st. The XL edition will feature all of the previously released DLC, skins and characters, as well as the upcoming characters from the Kombat Pack 2.

The NetherRealm Studios Twitter account confirmed that the XL edition of the game will not be coming to PC, nor will the Kombat Pack 2, featuring the Xenomorph, Bo’ Rai Cho, Tri-Borg and Leatherface. When asked about it they dropped the bomb like it was napalm.

@sh_aza777 Mortal Kombat XL and Kombat Pack 2 will available on PlayStation 4 and Xbox One only.

If you read through the feed you can see that PC gamers are not at all satisfied with the results. Amid the typical death threats about brain cancer and tumors, as well as the middle-fingers and F-bombs, there are some well reasoned individuals who express their disappointment at this turn of events.

Some PC gamers just wanted to buy the extra content and enjoy themselves with the second season of DLC… but that won’t be happening. This is despite the fact that according to Steam Spy, PC sales account for more than 480,000 out of the 5 million copies that that Mrtal Kombat X has sold in total. Either Warner Bros just didn’t think half a million people was worth porting the content to, or they just didn’t want to deal with all of the criticisms for being a crappy publisher when it comes to releasing some games on PC.

Either way, you won’t be experiencing any of that Xenomorph action or Leatherface goodness on the PC version of Mortal Kombat X. To rub it into the faces of PC gamers, NetherRealm released a new trailer. 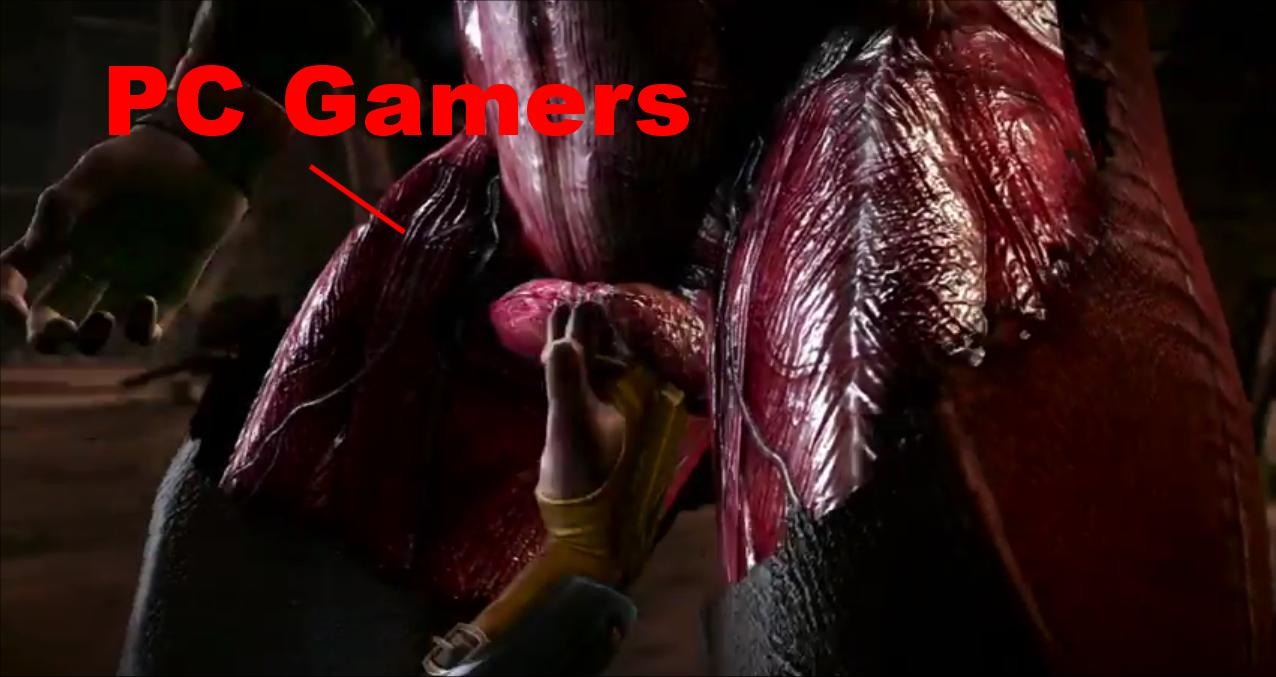 Oh, whoops. That’s not the trailer… that’s NetherRealm Studios using a proverbial nut punch to bust the balls of PC gamers. My mistake.

The real trailer that they released is below, featuring all sorts of content, skins and modes that will be available in the Mortal Kombat XL edition of the game, which is due for release on March 1st in North America and March 4th in Europe, for both the Xbox One and the PlayStation 4.

So just to recap: Mortal Kombat XL will include Tremor, Jason Voorhees, Tanya, Predator, Goro, Xenomorph, Tri-Borg, Bo’ Rai Cho and Leatherface. For the first set of characters the three themed skins will also be included, along with the Apocalypse skin pack, the Brazil skin pack, the Kold War skin pack and the Kold War Scorpion skin.

You can learn more about Mortal Kombat XL for home consoles – and the game that’s not coming to PC – by paying a not-so-salty visit to the official Mortal Kombat website.

5 thoughts on “Mortal Kombat XL Not Coming To PC”