Hard Reset: Redux Rated For Release On Xbox One, PS4 By German Ratings Board

Flying Wild Hog’s cyberpunk first-person shooter that released on PC a few years back called Hard Reset is getting a chance to win over some new fans by releasing on Sony and Microsoft’s home consoles.

The Games Cabin is reporting that the German ratings board, the USK, has officially rated Hard Reset: Redux for both the PS4 and Xbox One. You can check out the USK site to see the ratings for yourself or scope out the image below that shows the listing. 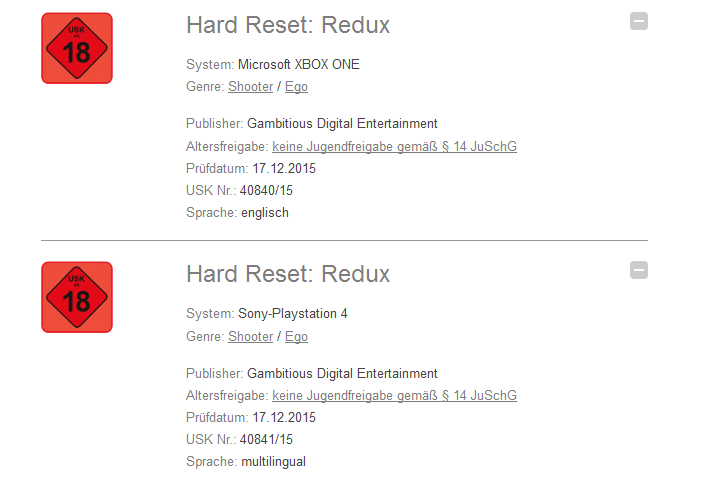 Quite naturally the game was hit with an 18+ rating. It’s rated ‘M’ for Mature Stateside so it’s not surprising that it would be 18+ in the land where Swastikas are banned from being displayed in media.

The game itself features a lot of hard-edged first-person shooter combat, larger than life boss fights, and environments specifically crafted around the concepts of a cyberpunk future that was heavily idealized in movies like Blade Runner. You can get an idea of what the game plays like with a video from TotalBiscuit.

TotalBiscuit takes a look at a preview build of the forthcoming PC-exclusive shooter by developer supergroup Flying Wild Hog.

The hook of the game was that it was a single-player, campaign-oriented shooter made in a similar vein to games like Quake II, Doom, Duke Nukem 3D or Blake Stone. It was a classically designed shooter for gamers tired of fast-paced, modern-military Call of Duty style multiplayer shooters.

The destruction heavy shooter focused a lot on environmental interactivity and weapons that felt like they packed a punch. It’s an interesting game to watch in action and the muted tones and low-saturation in the environments juxtaposed with the high-saturation lights and particle effects creates a visually engrossing look for the game. 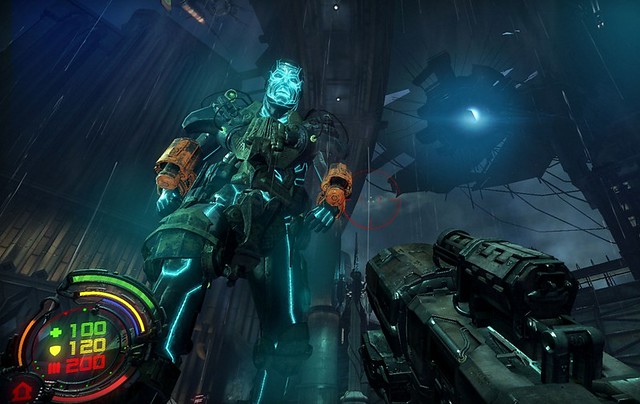 When the game originally released there were some complaints about the game’s performance and relatively short length, but with the extra DLC that was released over the years the game now has five additional levels, an extra boss fight, new survival maps and four new enemy types. By the time it releases on the Xbox One and PS4 it should look like a fairly good deal, especially if it’s between $9.99 and $19.99.

At the moment the game is available on the Steam store at 90% off for only $1.49. No official announcements about the PS4 and Xbox One versions of Hard Reset: Redux have been made by publisher Gambitious Digital Entertainment… yet.

One thought on “Hard Reset: Redux Rated For Release On Xbox One, PS4 By German Ratings Board”