On December 12th, 2015 in an interview with Event Hubs Capcom’s director of brand marketing and e-sports, Matt Dahlgren, had put the onus on the ESRB regarding Street Fighter V being censored globally for its upcoming release on PC and PS4. According to Dahlgren they had to ensure that the content in the game was abiding by the rules of the Electronic Software Rating Board. Well, I asked a representative of the ESRB  — who preferred not to be named — about the situation and they clarified exactly what role they played in Capcom reevaluating Street Fighter V’s content.

I initially asked if Street Fighter V was ever at risk of being labeled a ‘Mature’ title, basically trying to figure out if Capcom had to make changes to the game to secure a ‘T’ for ‘Teen’ rating. According to the ESRB representative…

“After receiving a final rating submission for Street Fighter V and based on the content depicted in the game and overall context, ESRB assigned a T (Teen) rating with content descriptors that include Mild Language, Suggestive Themes and Violence.”

The final rating doesn’t mean it was the initial rating. Back in June of 2015 Event Hubs reported that Capcom’s initial posting of the Street Fighter V rating from the ESRB was ‘M’ for ‘Mature’. This was before the butt-slap, the camera angle and all of the hoopla that followed with the unveiling of Rainbow Mika on August 27th, 2015.

During the initial beta test and during the promotional events that showcased R. Mika, neither her move, nor the camera angle that glimpsed the butt-slap were removed. During the second closed beta test on October 23rd, Gamespot posted a video showing that the game was not censored.

However, in a video posted on November 7th, 2015 by IGN, R. Mika’s Critical Arts butt-slap and finishing move had been altered, along with the camera angle for Cammy’s intro. This created a lot of confusion and anger amongst fans, causing them to blame the games media for Capcom censoring the content. According to Street Fighter V producer Yoshinori Ono, he stated that the changes were made to avoid offending anyone. According to Capcom’s brand manager Matt Dahlgren the changes were made to comply with the ESRB. 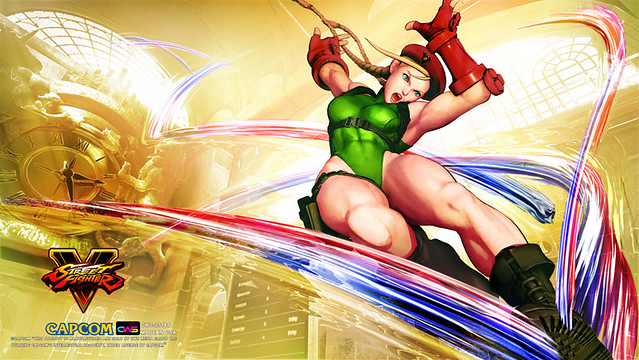 After contacting the ESRB, they stated that there is a pre-review process afforded to developers to let them know whether or not their game complies with a certain rating. The ESRB representative wrote…

“ESRB provides an informal pre-review process, which is open to all developers and publishers who submit their game for a rating. ESRB does not tell developers and publishers what to put in a game, but we do provide general guidance regarding content that would most likely result in a more restrictive rating. It is then up to the developer to decide how to proceed. Given the confidential nature of this process, ESRB does not elaborate or provide details about which games nor the content that may have been pre-reviewed.“

The official rating for Street Fighter V was posted on the ESRB website on November 4th, 2015 according to a report from Attack of the Fanboy, just before the IGN video was posted and just after the second beta test had concluded.

In a previous Ask Me Anything on Reddit, an ESRB employee stated that the ratings process takes about a week and is judged based on a video containing the most extreme content featured in the game. They stated in the IAmA…

“We receive a video of the game, showing the game’s most extreme content in the appropriate context. Then raters watch the video like a movie and present their rating. If it is in line with games that have similar content, the rating is issued. If not, the higher-ups assign a different rating.”

Based on when the changes were made – between October 23rd when the second beta was underway and November 4th when the final rating was issued – it’s entirely possible that Capcom made the change to coincide with the ‘T’ for ‘Teen’ rating that Street Fighter V ended up with. Of course the actual process and discussion on what needed to be changed is confidential between Capcom and the ESRB.

TL;DR: Unless some other evidence surfaces, the timeline of events appears to suggest that the changes were made in Street Fighter V to fit the ratings standard of the ESRB.