Ubisoft’s 2.5D action-stealth game Assassin’s Creed Chronicles: India is currently available for digital purchase on the Xbox One, PS4 and PC. The game is a challenging throwback to old-school platformers like the first two Prince of Persia games. For gamers who find themselves having a difficult time getting through the title, there is a complete gameplay walkthrough guide available that covers Assassin’s Creed Chronicles: India from beginning to end.

YouTuber RabidRetrospectGames has up the complete playlist of the game from start to finish, and you can check out the video walkthrough below. It only spans seven videos and can be completed in just barely two hours.

As usual, the ‘A’ button (or ‘X’ on a PlayStation controller) is to jump while the ‘B’ button performs a parkour roll when falling from certain heights. The ‘B’ button also scales down platforms and poles. Using the left analog stick and the ‘A’ button together while hiding, it’s possible to dash from one hiding spot to the next, undetected. The right bumper (RB) allows Arbaaz to grapple onto select surfaces.

You can use the left digital pad to switch to the noise bomb, which can lure guards out of their position. The right digital pad switches to the Chakram. Holding down the left bumper and the right analog stick enables Arbaaz to aim; the right bumper enables him to throw what he’s aiming.

It’s actually very impressive that the characters actually speak Hindi. I was shocked, amazed and nodded respectfully in Ubisoft’s direction for adding that little bit of cultural relevance in there. It annoyed the piss out of me that in Assassin’s Creed Unity everyone had British accents. I know there was an excuse about the animus and all that jazz, but it created the kind of narrative dissonance that made it impossible for me to suspend my disbelief whenever a character opened their mouth to speak.

The levels are definitely designed around stealth, so while it’s possible to go through swords-a-blazin’, it’s probably best to follow the movements in the video guide above to avoid being detected or to understand the patterns of the guards, the Templar and the British soldiers.

Many of the market sequences seem very similar to the old 16-bit platformers from the yesteryears… just slowed down for the purpose of stealthing through.

It’s also possible to use the environment as a way to take out enemies. For instance, you can use the directional noise to lure an enemy under a red crate and then use the Chakram to cut the rope holding up the box, causing it to fall and crush the enemy. 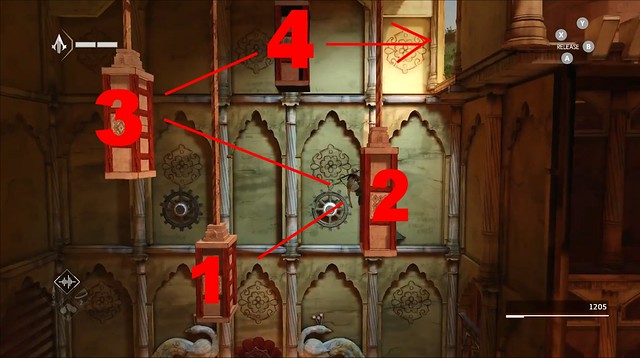 After that segment, proceed toward the tower. Grab what’s in the pot and head out of the window and climb to the top of the tower and use the rope to slide toward the back of the palace wall.

During the segment where you need to get past the three sleeping guards with the crate wench guarded by a tiger. You’ll need to silently kill or subdue the three guards to crank the wench, which will activate the dog. If the guards are subdued then the dog being activated won’t matter and you can climb up and get to the next segment.

In the mission to rescue Hamid, you’ll have to break into the heavily guarded palace – after procuring the mission items you can sneak in with a group to get past the guard. Once inside you will have to avoid direct combat to prevent Hamid from being killed. It’s best to start with a smoke bomb to get past the first guard and from there proceed to stealthily take out each guard from the shadows.

The next mission is a tailing mission where players will have to mix a bit of stealth with speed. The mission moves through pretty quickly, and simply requires speedrunning style tactics to keep up with the target.

You have to stay with or ahead of the target to keep the timer from running out and the mission from ending.

During the next segment it can get difficult because it’s about waiting for the guard’s pattern to provide an opportunity to past them. You’ll need to first disable the explosive traps in the area and proceed with caution. There’s a part where two guards come out to talk to one another… wait for a clear opportunity to silently take them down and hide the body.

Head down the map and dodge the gunfire to make your way into the castle.

The final boss fight involves avoiding detection from the final boss. There’s a giant circular target showing where the boss’ vision is and how to avoid it to keep him from harming the princess. It’s all just a matter of timing and avoiding the giant ellipses as you make your way to the boss.

Eventually you’ll get to the boss where you’ll have to fight a couple of waves of guards, soldiers and henchmen. After defeating several waves of enemies the fight ends and a cinematic will play. The end.