This almost didn’t seem worth writing since this is taking a look at the culture of a site that covers culture in the digital age. It’s almost too metaphysical to be worthy of its own news post. But when you don’t have any editorial oversight then there’s absolutely no reason not to delve into topical matters dealing with journalistic integrity and corruption in games media – especially when sites like N4G and moderators on /r/Games feel as if corruption in games media isn’t gaming related.

With all that prattle out of the way, the story here is that Kotaku is on a banning spree. They’re dropping the banhammer like Blizzard going on a ban-wave in World of Warcraft or Heroes of the Storm for botters and hackers, or banning people for trying to force Whorestone onto others in Hearthstone. Why is Kotkau doing this? Well, the bans are going out for those who are spoiling Star Wars Episode VII: The Force Awakens.

“A very special “fuck you” to all the people who decided to spoil Star Wars in our Facebook comments this week. Readers, we’ve tried to ban as many of them as we could find. Unfortunately, it’s been hard to avoid spoilers anywhere on the Internet this week–and it’s really probably best to just see the movie ASAP since spoiler-deletion whack-a-mole is not an easily winnable game. At least no one has spoiled Episode VIII yet!”

I should warn you that clicking on the link above leads to some comments that contain spoilers for Star Wars Episode VII.

Anyway, Totilo may be attempting to take the high-ground with the Kotaku community but they’re part of a community hosted by an organization that was willing to pay for Star Wars Episode VII: The Force Awaken spoilers. In fact, the community is actually doing exactly what Kotaku’s parent company, Gawker, asked them to do; post spoilers.

Twitter user KingFrostFive points to an article on Gawker published on June 16th, 2015, titled “Do You Have the New Star Wars Movie’s Shooting Script? We’ll Pay For It”.

“So you have the Star Wars: Episode VII – The Force Awakens script (from any draft stage!), a portion of the script, or know someone who does have the script, we want to hear from you. And depending on what you have, we’re willing to pay cold, hard cash. Or we can warm it up first! Whatever your preference—we’re here to serve.”

They clearly don’t care about the SPJ’s rule about not paying for information, but it’s not about ethics in journalism for the people who care so deeply about sexism in gaming, right?

Twitter user Doomskander took it a step further, though, revealing that Kotaku is no saint in the spoiler department.

While Gawker and Kotaku are diametrically opposed on the wheel containing the rules of spoilers for Star Wars, they sync up together quite nicely as a spooning couple dreaming dreams of unethical behavior when it comes to spoilers in general.

Back on December 11th, 2013 Kotaku’s Jason Schreier posted leaked scripts and documents of then untitled Fallout 4 — yes the same leaks that allegedly got them blacklisted by Bethesda. The scripts contained a mission from Preston Garvey, an NPC character in the game, as well as the setting, parts of the opening sequence and details about other characters and content in Fallout 4. 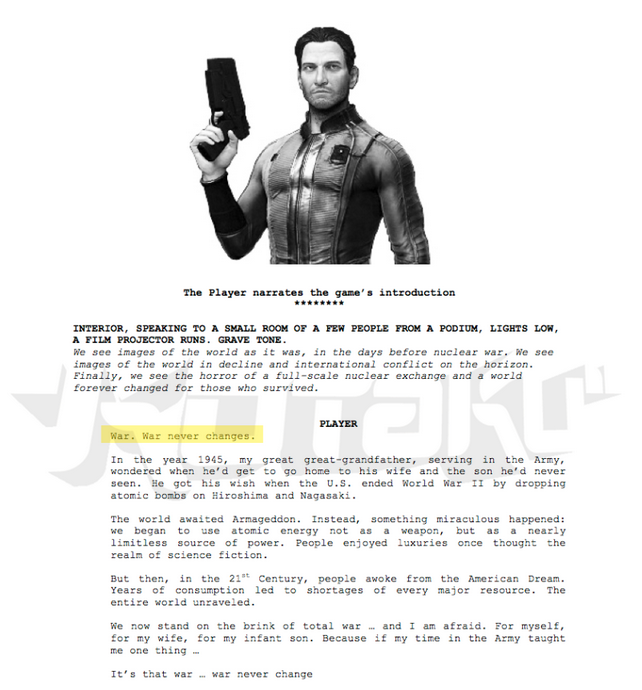 It’s a significant leak for a game that wasn’t announced until two years later. It seems rather brash to start banning people for posting spoilers for a movie that’s at least out. I mean, what’s worse, having a story and characters leaked two years in advance, or a day or two after the property is already released?

It seems even more baffling that Kotaku would take measures against this after an article on Kotaku from Patrick Klepek published on December 15th, 2015 highlighted the nature of spoiler culture and how some things didn’t seem so spoilerific in the grand scheme of things. Different strokes for different folks.

In the end, though, Kotaku is taking a hard stance on spoilers for Star Wars: Episode VII: The Force Awakens, even though their parent company paid to have people leak the spoilers anyway. Those special people Totilo told to go “Gawker” themselves? Well, they’re just six months late to the party.