Advertising is the bread and butter of the AAA game space. It’s practically what separates a lot of the games in the upper echelon from the games considered indies. That distinction was made even more clear with a new breakdown of advertising spending by marketing research firm iSpot.tv.

Games Industry picked up the news from over on Venture Beat where GamesBeat teamed up with iSpot to do a breakdown of the advertising expenditure by major games publishers throughout the busiest and most financially prolific time of the year: November. 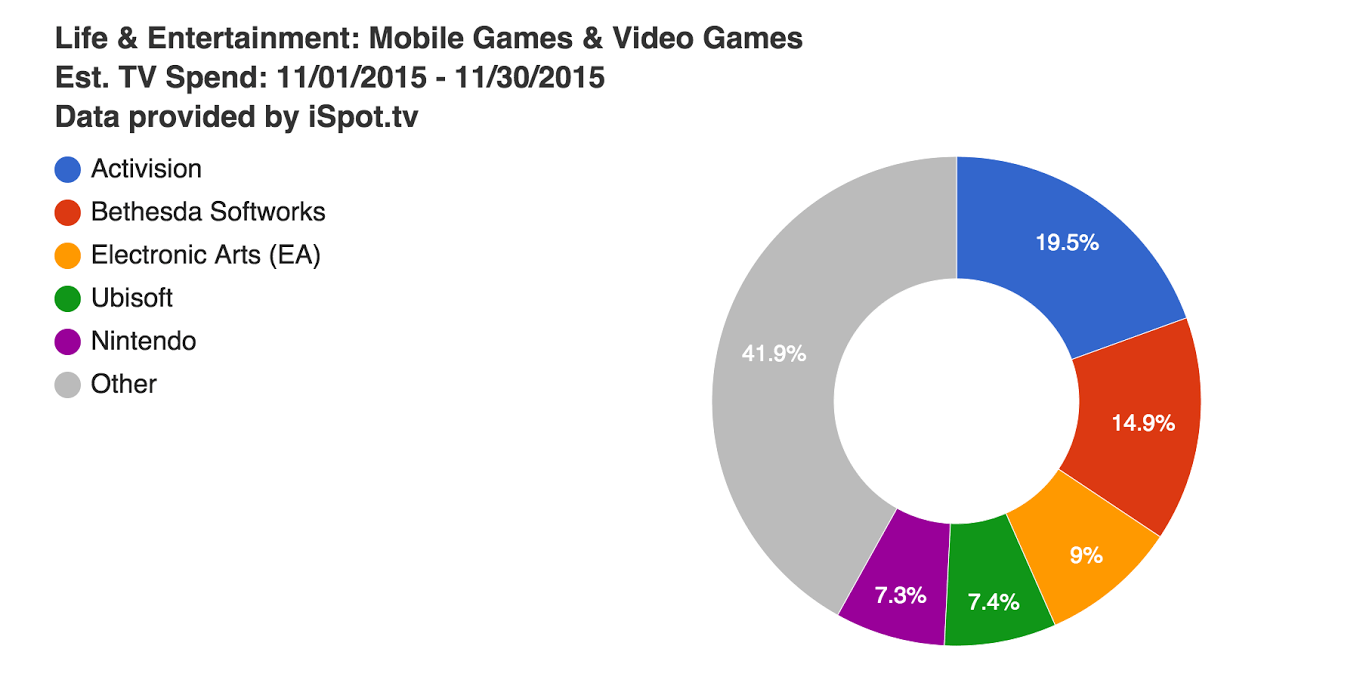 According to the breakdown, Activision spent $18 million alone in the month of November on television ads for Call of Duty: Black Ops 3, making up for 19.5% of the $91 million that was spent in total throughout November.

Bethesda spent $14 million advertising Fallout 4 on television advertising for Fallout 4, consisting of four different ads that aired 779 times across 21 different terrestrial networks, accounting for 14.9% of the total spending during the month of November.

The official Call of Duty®: Black Ops III live action trailer, directed by Wayne McClammy and featuring Michael B. Jordan, Cara Delevingne, and Marshawn Lynch, follows Kevin as he wall-runs, thrust jumps, and power slides through enemies and zombies on his way to glory. No matter who you are, there’s a solider in all of us.

Opposite of years passed where EA was at the top of the crop for spending on items like Battlefield 3, the company fell quite precipitously in the ad and marketing department for the most important month of the year. They only managed 10% of the total spending and it was only for Star Wars: Battlefront. Even they knew it was a waste of money to advertising the always-online Need For Speed reboot, which was a perfect way to kill off any interest people had in the brand. Battlefront ads ran from November 9th up until the present date a total number of 500 times.

Nintendo was at the bottom with only $7 million in ad spending, mostly for Nintendo 3DS related material and games. Surprisingly they didn’t spend anything to put Yo-Kai Watch on the mainstream platter.

Rainbow Six Siege is a unique first-person shooter where infiltrating Attackers and fortifying Defenders clash with high intensity in all-new, exciting tactical combat scenarios. In the destructible playgrounds of Siege, anything is possible, but only those who prize brains over bullets will prevail in the high-stakes game of teamwork and strategy.

An interesting entry on the chart is Ubisoft. Usually they’re quite boastful of their Assassin’s Creed franchise but this year they scaled back greatly in the national ad space, focusing more on internet-based advertising. They only made up for 7.4% of the advertising in the television space, but it wasn’t spent on Assassin’s Creed Syndicate. They focused more on the Idris Elba-starring Rainbow Six Siege live-action ad spots along with Just Dance 2016.

Basically you could say that national television ads are for the casuals while internet advertising is for the cores. The fact that Ubisoft put more faith in advertising Rainbow Six Siege over Assassin’s Creed Syndicate to casuals shows how little faith they have in the latter’s brand appeal outside of die-hards who haven’t given up on the annual series.