The theories from gamers that big AAA publishers like EA, Microsoft and Activision attempt to squash negative dissent in the gaming community using subversion tactics and reputation managers has been a conspiracy for a long time. However, it’s rare that such a form of corruption ever gets exposed. Between gaming media being corrupt and many moderators and administrators at top news aggregators also being corrupt, it makes it tough to come across proof of wrongdoing that can be properly exposed. Well, that all changed when a Reddit administrator stepped in to replace the moderators of the Star Wars: Battlefront sub-Reddit after they discovered collusion to hide and censor content between EA community manager Mathew Everett and the Reddit moderators.

PlayStation Lifestyle did a very in-depth write-up about the situation, noting that Reddit administrator Sporkicide posted a message requesting new moderators after all of the mods from the Star Wars: Battlefront sub were removed. The sub currently has more than 41,000 subscribers and a post by user Timbob12 indicated worry given that the game is so close to release and the sub has no mods.

Well, Sporkicide briefly explained why the mods were removed, stating…

“This message [posted above] is an indicator of something seriously inappropriate and should have been reported to the admins at the time, but there was also additional evidence of EA contacting moderators (and not just of this subreddit) and asking for specific removals and NDA enforcement.

“EA has legal options at their disposal to enforce their agreements that do not include violating our user agreement by coercing moderators to do it for them.

“[…] What I do have evidence of is an EA employee being directly involved in the removal of posts and enforcement of an EA NDA, both of which are some of the few things that mods are expressly not allowed to do, and which is incredibly inappropriate for a company representative on the site to ask for in the first place, hence the consequences.”

Some people cried “foul” and that EA would not stoop so low as to bribe or influence the kind of content users were made aware of on the Battlefront sub-Reddit. However, this issue did not just crop up recently  and it originally surfaced back on July 3rd, 2015 when then moderator balotelliaguerOOOOOO tried to defend the behavior of the moderators on the site after users started to accuse the mods of being paid off and that they were hiding and deleting critical content and comments…

“We HAVE had contact with DICE, but they have not in any way affected our decisions. We just simply do agree with the concept of an NDA. When footage of an alpha is released, it can have poor effects on the judgement of a game.

“Simply, our “early” (if you can even call it that) access to the alpha was just a thank you for being the consolidation of info and discussion /r/starwarsbattlefront always has been. Here is a picture of the message of /u/sledgehammer70 sent us asking for our usernames. There isn’t really a time on the message, but as you can see we were able to play a few hours earlier than everyone else at BEST. It wasn’t just us, though. /u/littleredrex did get to play with the Youtuber GassyMexican, and there were probably many other Youtubers sent alpha early access.”

There is an image from Mathew Everett from Electronic Arts asking the moderators from the sub to remove all footage and discussion of alpha footage and content from Star Wars: Battlefront, and offering alpha access as a “thank you”. A short summary of the exchange sees Everett stating…

“With the Alpha just a few days away and knowing that people love to break NDA’s all the time. I would like to ask that anyone posting Alpha content / feedback etc… you have that post locked and removed if possible.

“We have setup a Alpha feedback forum for all alpha participants to post feedback to and they will get that info before they join the Alpha.

“Also, as a thank you. Could each of you DM me your Origin e-mail so I can be sure each of you have access to the Alpha?”

Another message back on July 2nd through 3rd earlier this year was also exposed, showing the moderators from the sub joking about being accused of bribery while discussing how to control the conversation and narrative on the sub with an employee from Electronic Arts. 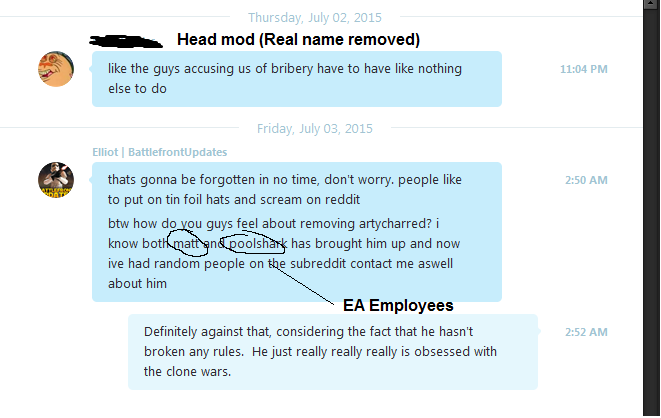 Another message shows balotelliaguerOOOOOO acknowledging the deal he’s made with EA and DICE about removing content and censoring content that the company didn’t want on the sub, telling a user…

“We’ll be removing [media content and posts] as fast as possible. DICE and EA have been wonderfully helpful to us and have allowed us all (the mod team) early access to the alpha. The LEAST we can do is uphold our end of the NDA and try to enforce it on the subreddit.”

You can see the image of the conversation below, as spotted by The Escapist. 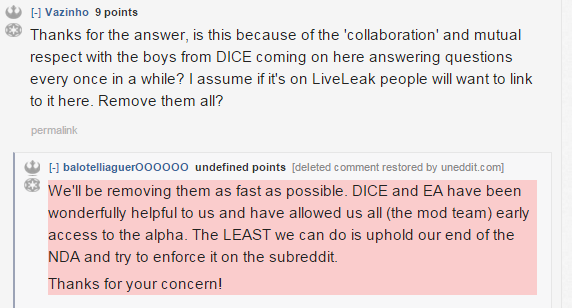 Matthew Everett went by the username of Sledgehammer70 on Reddit before he and the rest of the moderators from the sub were banned for their collusive indiscretions.

According to the Reddit administrator, taking bribes is against the policy of the site, and exchanging favors for a company for promotional purposes is also against the site’s policies for moderation, although there is nothing in the actual moderator moddiquette that specifies anything related to this particular incident. However, this would likely fall under “removing content based on your opinion”, since the posts being removed or censored were not actually in violation of Reddit’s rules.

“I played the alpha maybe 2 rounds, I didn’t preorder and I don’t plan on buying the game. We did remove direct links to mega and other hosting services because those type of links are not allowed anyways. We also initially removed videos of leaks but since not everyone on the mod team agreed with the NDA policy we discussed prior to sledge messaging us, we allowed the content back on the sub. Keep in mind we only removed leaks for about 4 hours of the first day of alpha, After community feedback and internal discussions we allowed all content from that point on.”

For now it looks as if Reddit will simply replace the moderators and continue business as usual. EA and DICE have been working hard to squelch negative dissent against their upcoming Star Wars: Battlefront game given that most people who do even a little bit of homework on the game will know that they’re paying $60 and getting far less than what was featured in Star Wars: Battlefront 2, which was released a decade ago on the PlayStation 2, Xbox and PC.

Even still, this is just another lesson in the corruption pervasive in the gaming industry at the moment.