Kotaku’s editor-in-chief Stephen Totilo has been doing press for Gawker and Kotaku, attempting to save face for the media giant by telling the story of Kotaku’s perceived blacklisting at the hands of Bethesda and Ubisoft. Totilo took the press wagon to the doorstep of MSNBC, and they were more than willing to give Kotaku some lip-service in a 13 minute segment talking about industry blacklisting. There was only one problem… why no mention of Kotaku’s Patrick Klepek and his attempt to blacklist another industry professional using the secret Game Journo Pros list?

Natalie Morris gave Totilo a lot of leeway to talk up Kotaku’s position following a “no comment” from Bethesda and Ubisoft. Totilo managed to get the entire segment to himself but Morris did challenge him a couple of times in regards to discussing what is “good journalism” and how far is too far when it comes to publishing leaks that could hurt the creative process of gaming. You can check out the entire piece over on MSNBC.

No where in the interview did they discuss Kotaku’s current writer Patrick Klepek being a part of the Game Journo Pros and calling for a blacklist on another member of the gaming industry for making “creepy” and “sexist” comments. At the time, however, Klepek was a part of Giant Bomb, but trying to rally journalists to blacklist someone in a private organization doesn’t seem to coincide with the whole “ethics in journalism” vibe Totilo has been giving off. 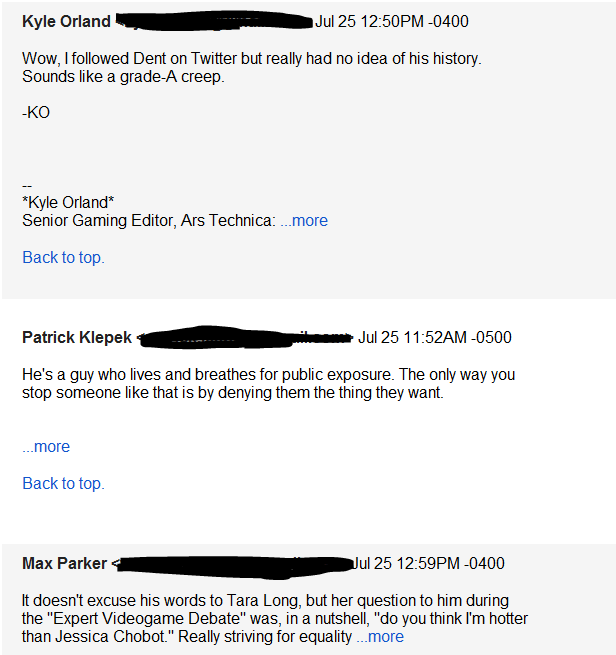 The Game Journo Pros was also involved in a previous attempted blacklisting scenario involving journalist Allistair Pinsof. No where is that discussed.

When TotalBiscuit brought up the blacklisting issue that occurred at the hands of some of gaming’s largest media publications last year in his hour and a half discussion with Totilo, the editor-in-chief at Kotaku quickly hand-waved it away by saying he wasn’t involved in those communications. Obviously he wasn’t willing to discuss blacklisting when it occurs at the hands of journalists under his employment. His official response was….

Ethics in Games Media: Stephen Totilo of Kotaku comes to the table to discuss

The last few months have raised many questions about ethical practices within games media. This is a lengthy interview with Stephen Totilo the Editor in Chief of one of the largest gaming sites Kotaku, who will answer allegations of conflicts of interest and express his opinions on games media and its role in the industry.

Blacklisting is illegal in most states in America.

Anyway, at the start of the MSNBC interview, Morris at least gave some recognition to the fact that not everyone is running to Kotaku’s defense. She doesn’t whitewash their blacklisting as if the community is all in favor of the Gawker-owned gaming outlet.

In fact, majority of gamers commenting around the web aren’t siding with Kotaku. Even on the MSNBC page the comment section is pretty much entirely anti-Kotaku, with users like iceloops123 writing…

“Kotaku pissed off GAME DEVS thats why they blacklisted also they blacklisted youtubers and denied it and also blackedlisted DEVS themselfs t Kotaku [sic] is going to be a crap hole without ethics. like their father gawker”

For a bit of context… popular YouTuber Steven Williams, known online as Boogie2988, claimed that Kotaku had blacklisted him – presumably in relation to coverage of his videos and material. He further explains this in his own video detailing what he meant.

Did I LIE about Kotaku Blacklisting me?

Please subscribe to this gaming channel while you’re here! https://www.youtube.com/boogieplays Well, I’ve been accused of being wrong about it by Stephen Totillo and now being called a liar by Jason Schrierer. Felt like I had to take a moment to defend myself.

Even still, the average gamer does not seem inclined to give Kotaku any leeway. On the MSNBC page the rest of the comments were all against the Gawker-owned publication, with Forcebalance writing about wanting Kotaku to go away…

“Kotaku, you pitted yourself against your readers and now you get what’s coming to you. I would like to see Kotaku fold up shop and get real jobs.”

RedHurricane24 didn’t hold anything back, equating Totilo’s “ethics in journalism” shield with being nothing more than a facade given the outlet’s opposite stance when #GamerGate called them out on their ethical breaches, writing…

“You’re hated and reviled because this rallying cry you’re making for ethics in game journalism, is the same one you mocked when it was revealed that Nathan Grayson slept with a developer to give her game a glowing review.

“Don’t play innocent, your hands are just as dirty, if not dirtier.”

Even still, Totilo tries to equate the leaks they do on the site with news that leaks across other mediums such as movies, television and music. However, in the case of games, leaking too much too early can set a bad precedent for expectations on a game. It’s not uncommon for creative directions to take a turn; and information leaked too early can sometimes do little more than hurt the creative and production cycle depending on the project.

According to Totilo, he states in the MSNBC interview…

“To me, if you get true information and you’re a reporter the thing you do is you tell your readers. There would be very few reasons not to tell your readers that you know something they would be interested in.”

So what were the official reasons for not doing any follow-ups on the very easy-to-access facts about The Fine Young Capitalists having their IndieGoGo attacked? Or that they were embroiled in a dispute with one of the developers a Kotaku employee was sleeping with? Or that they really wanted bring more women into gaming but no major outlet wanted to talk about the project that eventually evolved into Afterlife Empire?

What’s more is, why is Kotaku – apparently unashamed to talk about when they get blacklisted – not pursuing any stories about defending Patrick Klepek’s call for a blacklisting or the one that was set against Allistair Pinsof? He doesn’t even need to look far for evidence and facts… a few of his Kotaku employees who were in the Game Journo Pros group likely still have the e-mails.

Now it’s just a matter of when Kotaku will hop on the press train to start talking about the people their peers tried to blacklist.