How To Get Fallout 4’s Gauss Rifle, The Last Minute

Quite a bit of people playing Fallout 4 might have seen others using the Last Minute rifle in video playthroughs, but do you know how to actually get the Gauss rifle? If you have no idea where to start, this guide will help you to be able to get your hands on this gun.

For those that want this powerful Gauss rifle, you will need to save Preston Garvey during the quest When Freedom Calls, and you must complete the quest Sanctuary where you must build up a settlement at the Sanctuary location. After that is done, you must complete a mission involving the Minute Men that tasks you to help different settlements around Boston.

After completing the castle takeover, you will be given more Minute Men quest that can be skipped by sleeping for three days, or by doing them. After the choice of yours with the side quest by the faction is done with, you will be given another quest called Old Guns when talking to Garvey at the Sanctuary. 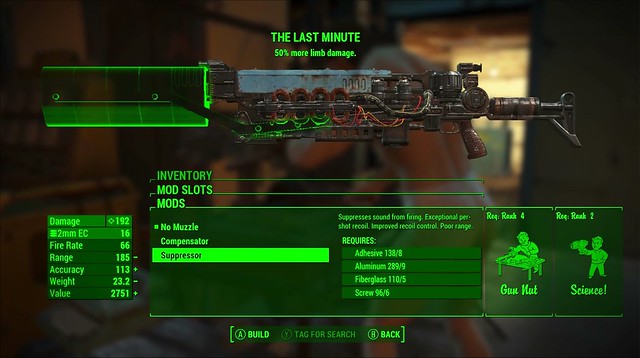 After receiving the quest Old Guns you will need to go back to the castle, for those that might have trouble with its location, the castle is just south-east of Diamond City. Once you make it to the castle, you will need to talk to a lady named Ronnie who will take you to the General quarters, where you will have to go into workshop mode to remove a pile of rubble in a door way.

After traversing the castle’s lower level, you will eventually come across a sentry bot named Sarge, which is really tough and will require some of your best weapons and armor to defeat it. After beating the bot you will need to follow Ronnie to a console where she will type a password to unlock a door to proceed onward.

Once you are done with that segment, you will need to go outside of the castle and mark the surrounding areas with the flares and smoke grenades to see if the artillery is capable of defending the castle. Once you pass that part, you will need to go back to Ronnie and barter with her during her business hours so that you can buy the Gauss rifle named the Last Minute.

And that’s it to the quest to get the Last Minute Gauss rifle. You can watch a video by Camalworks, which he provides a nice detailed video guide on how to get the gun as seen below.

Welcome Ladies and Gentlemen! This video is a walk through guide, where I show you how to find ” The Last Minute “, a brutal, one shot, head exploding, limb destroying Unique Gauss Rifle. I hope this helps and you enjoy the video!

Looking over to the stats of this gun —  to determine if it’s a good gun or not — it has a base damage of 110, a fire rate of 66, a range of 191, an accuracy of 69, a weight of 15.7, and holds a value of 2328. The Last Minute uses 2mm EC (electromagnetic cartridge) rounds, which can be found by scavenging around or can be bought at certain vendors. Lastly, its ammunition is quite rare and hard to find, so use this gun cautiously unless you know who you want to disintegrate.

One thought on “How To Get Fallout 4’s Gauss Rifle, The Last Minute”