The Sims 4 Twerk Mod Gets Down And Dirty

Never say never in the world of modding. That’s a pretty good maxim to live by for any popular game out there in the great nexus of game modifications and user created content. In fact, if someone told me that there would be a twerking mod for The Sims 4 I would probably just shrug and say “Well I won’t be surprised until a dancing panda is twerking in The Sims”. Lo and behold, the new mod for The Sims 4 has already resulted in a video being produced featuring a dancing panda twerking in The Sims.

YouTuber UrbanSim has a video up of the mod, which was originally imported into the game by an Italian modder named Umpa77. The animations themselves were designed by Japanese MMD modder TKOL. You can check out UrbanSim’s video below featuring Kylie Jenner and some furries twerking in a dance studio.

Open Me} Don’t Forget To Rate *Please* [WARNING, MAY NOT BE APPROPRIATE FOR YOUNG VIEWERS!] ➦ Just a quick overview of a Twerking Animation I saw on Cindygame’s channel that had me in hysterics! Oh dear lord. Probably the silliest thing I’ve seen in ages!!!!

The modder originally put up a video showing how he converted twerking from MMD – a popular dancing application featuring various 3D characters dancing to popular music, which is oftentimes associated with the vocaloid pop star Hatsune Miku –  into the dance animations in the stereo setting in The Sims 4. The mod enables the characters to do the moves from MMD instead of the typical dancing found in the game. You can check out the video below showing how it works.

Hi everyone, i’m a back for a new dance video. Warning, the music is explicit but i hope you’ll like. If you want the animation, you can find here : https://umpa77.blogspot.com.es/2015/03/sims-4-mmd-twerk.html (thanks for the site) Thereupon, good viewing !!!! 🙂 How to use the animation : you choose “dance” in the radio.

The whole thing is pretty ridiculous and Umpa’s video is obviously more refined to make the “twerking” look closer to the likes of Miley Cyrus as opposed to the drunk and dangerous twerking that those bears are throwing out in the video at the top of the article.

The twerking is just there for the spits and giggles but it doesn’t really do much of anything else. I actually prefer UrbanSim’s video only because seeing that panda popping it and locking it like a pole dancer had me literally laughing out loud. Kylie may have had the dollar bills on the mind but that panda looked like it was going to make a real career out of it. 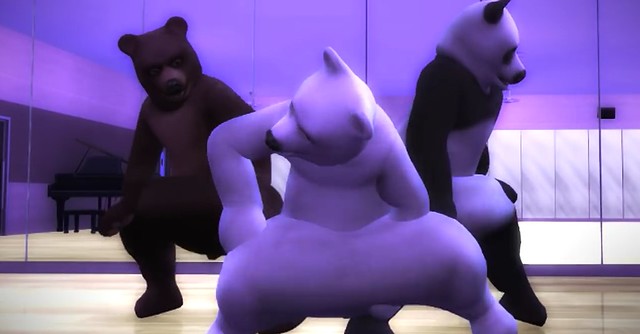 If the twerking mod seems like something you would want in your version of The Sims 4 you can download and install it right now from over on the Umpa77 blog.

If, however, you don’t own The Sims 4 because you decided that you didn’t want to spend your money on feeding EA’s evil empire but instead you stuck with The Sims 3, Umpa77 has you covered.

Hi everyone, i’m glad to show a Twerking video in the sims 3 game. Yes, it’s now available for the sims 3 and thanks so much to Umpa77. I hope you will like my video and good viewing !!!