Guerrilla Games revealed some new gameplay footage for the post-post-apocalyptic prehistoric game Horizon: Zero Dawn. The new footage shows the same area, but with some different outcomes and it looks amazing.

There are only a few gameplay trailers that look pretty cool to me, and it seems that Horizon: Zero Dawn made it on that list. I would love to get my hands on this game, due to the open world elements and that it sports loads of cool stuff — like robo-dinosaurs. What’s more is that Horizon: Zero Dawn has a new gameplay walkthrough video by the senior producer of the game, Mark Norris, and it looks pretty cool.

By now, many should know that I don’t get too excited about trailers, but this one is actual gameplay footage that shows the game’s versatility. This element was further elaborated on in a brief segment when Alloy dealt over 800 percent of damage to a robo-deer out in the wild. 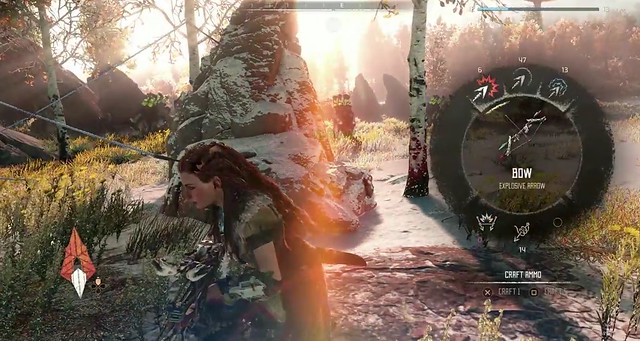 So with that said, we know that the RPG weapons will scale based on upgrading and what type of arrows you are using, which can be crafted as well. Something that always catches my attention with open world RPGs, is that they offer players the ability to make almost any item or weapon they want, while at the same time defeating a monster or boss in different ways (like in the video below).

Something I also like, the devs enforce that you learn your enemies. That is something that most good RPGs have players to do, which is another reason why I like games like Monster Hunter. Always learning your enemies and opponents mixes the typical grind up when playing an RPG, since you aren’t doing the same thing.

With that said, you can watch the latest gameplay walkthrough that was posted up to Sony Playstation’s YouTube channel. The video runs for eight minutes long, and shows some segments from the E3 footage as well as some new content for fans to drool over.

In addition to this, the game at this stage has some frame-rate issues, but that is expected due to it being in its early stages of development. But as of now, we see that they added much more to the gigantic beasts roaming the post-apocalyptic world, which sports over 90 different destructible parts and wields much more than a tail-whip and stomp that was showcased during the E3 video; but the robo-dino has techno lasers and a plasma Gatling gun, which is pretty cool.

Lastly, something that I’ve notice a lot of people in the comments of the video really wanted was to ride a robotic dinosaur, and I gotta admit that would be an awesome way to travel around the world, if the devs add that in. 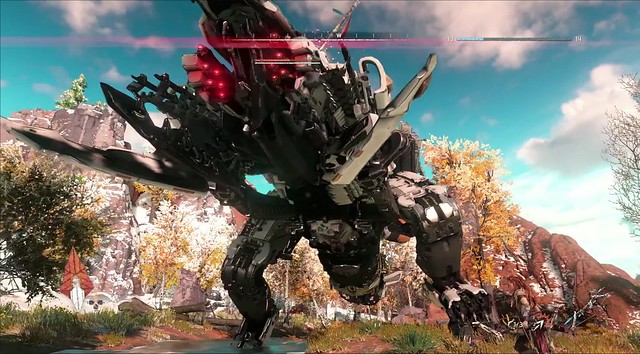 For those that are excited for the post-post-apocalyptic game, Horizon: Zero Dawn, it will launch exclusively for the PS4 sometime during 2016. For more information on the new game you can hit up playstation.com to learn more.