A new market report from Activate takes a long, hard look at some of the metrics driving our technologically immersed society. They dabble in the budding growth of the e-sports arena and forecast it to hit $1 billion in the U.S., by 2018, and $4 billion globally by 2018.

There’s a lengthy report that you can check out from Activate on Slideshare, covering a number of different topics within the consumer electronics market.

Starting on slide 104, there’s a chart showcasing where e-sports and cost per fan looks like compared to other major league national sports such as the NFL, NBA and the NHL. Check out an image of the slide below. 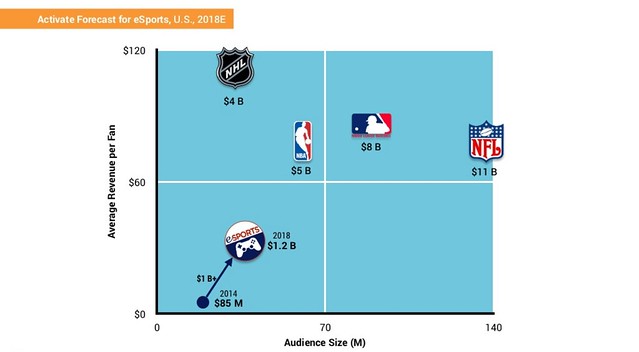 The following slide forecasts the e-sports market to hit $4 billion by 2018, globally.

SuperData puts the e-sports arena at $612 million for 2015 and they also peg the gaming industry to bring in a total of $74.2 billion by the end of this year.

Within three year’s time, Activate is forecasting the e-sports market to expand in the U.S., more than 200% of the market’s current global revenue trend, and they’re forecasting the competitive electronics arena to quadruple on a global level by 2018.

Interestingly enough, the report also indicates that as e-sports grow betting will too. 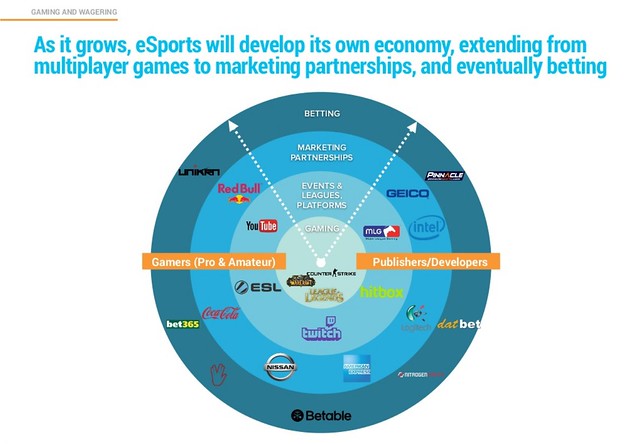 I think they’re little late to the party. Betting already makes up for a large portion of the e-sports community as it is. In fact, it was just recently reported that South Korean officials had to step in and make arrests when organized crime syndicates began match fixing in professional StarCraft 2 leagues. This included several players, a manager and even a video game journalists being involved in colluding in corruption to fix the matches and earn several thousand dollars each in the process.

Anyway, Activate makes the prediction that wagering will be implemented into the actual games at some point to allow an ecosystem to encourage millennials to make real bank on participating in e-sport wagers.

I don’t know how well this will go over because certain large e-sports markets are situated within regions that are very strict and averse about introducing real-money wagers and betting into a legitimate form of gaming culture. In fact, the South Korean ministry of culture had Blizzard remove the Real-Money Auction House from Diablo 3 because they explicitly stated that the ecosystem within the RMAH and the game’s loot-and-grind gameplay would encourage a gambling-style atmosphere, as reported by the Korea Times back in 2012. And just for a bit of perspective, South Korea is one of the most prominent regions participating in e-sports today.

Of course, with Activate’s forecast looking forward, who is to say that South Korea’s ministry of culture may not change their mind about the ecosystem of wagering propagated by legalized gambling?

Anyway, the whole report by Activate is very fascinating stuff and well worth a read if you have time. You can check it out over on the Slideshare page or by visiting the official Activate website.