The Kara demo from back in 2012 that Qunatic Dream released, presumably designed for the PS3, was actually a prototype for a game coming to the PS4. The new title is called Detroit (but I’m really, really hoping they add something more to it other than just Detroit) and it’s a PS4 exclusive from David Cage and the rest of the team at Quantic Dream, the developers that brought you mind-twisters like Indigo Prophecy and pantie-bunchers like Heavy Rain, and the game that will probably best be known for nudifying Ellen Paige, Beyond: Two Souls.

HassanAlHajry has a trailer up for the new game, which was announced during the Paris Games Week in Paris, France. You can check out the trailer below.

The video is extremely wordy, spending a good amount of time setting up the character and the atmosphere.

Warning bells ring out, though, given that this is basically Bladerunner meets A.I.. I don’t know if they’re planning on actually going a different route with this or just going to put players into the role of one of the androids attempting to make “change” in the world. There’s also hints of Deus Ex: Human Revolution, as obvious puritans take to the streets to protest the availability of the humanoid cyborgs. 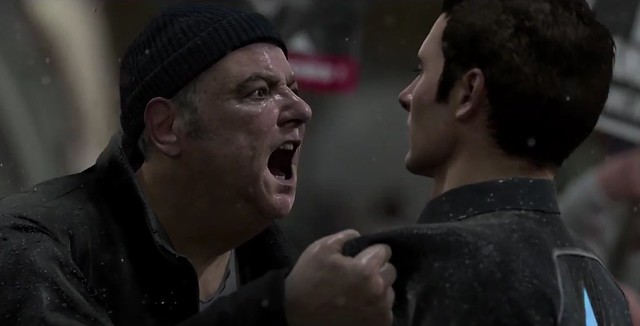 The detail in the characters look pretty good, though. We’re actually hitting that uncanny valley territory where you know they’re not quite real but they’re getting there and the creep factor is starting to come into play, very much like Cortana in the latest Halo game.

Quantic Dream, however, uses a lot of sub-surface details, lighting tricks and camera filters to help hide the uncanny effect. It helps naturalize the appearance of the models while running in-engine. In some of the earlier CryEngine demos without the filters on the characters just looked really creepy given the high-fidelity design of their geometry and texture work but their obvious lack of a “human” touch. 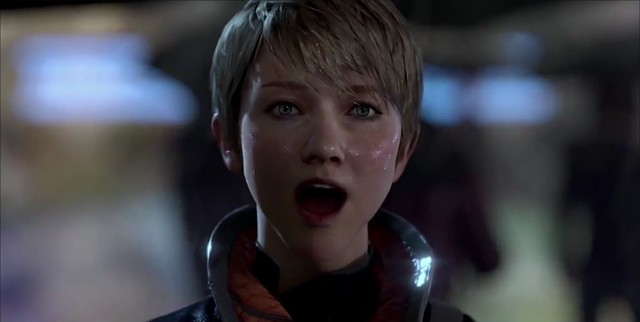 Anyway, the waxing poetics on what means to “feel” human was a little too over-the-top for me. I imagine it may strike the fancy of some gamers but after seeing a mature take on the android complex with a movie like Ex Machina, the whole thing of “feeling” human seems like amateur storytelling when talking about machines, unless they actually explain how Kara feels human, which could make for some very interesting plot developments. And given David Cage’s penchant for far-left progressivism, don’t be surprised if Kara ends up being a lesbian-quadriplegic android by the end of the game.

Anyway, for those of you who don’t remember the original 2012 demo that Quantic Dreams released to showcase the power of their latest tech, you can check it out below.

►► Remember to select 720p HD◄◄ Quantic Dream and David Cage revealed their new tech KARA @ Game Developers Conference 2012 (GDC 2012). It is not the studio’s next game and you also might want to know that it was created a year ago. Dream’s new post-Heavy Rain sequel tech demo is astonishing.

There’s no release date for Detroit but I wouldn’t doubt if it has a late 2016 window as a tentative slate. Be sure to stay tuned in for more info on Quantic Dream’s latest story-driven title for the PS4.