Mods for Metal Gear Solid V: The Phantom Pain have been popping up quite regularly, and that shouldn’t come as a surprise to anyone given how popular the game is. One of the newest mods for the game allows players to unlock some of the DLC and hidden items, including DLC from the console version of the game.

The mod is simply called “DLC and All Items Unlocker”. It was made by modder PoisonedMods. There are two files available, one as an automated file that clocks in at more than 100mb and a smaller LUA script that you can install, which keeps the game open for additional mods, that only clocks in at 17kb.

So what does it do? Well, it’s mentioned right there on the mod page by PoisonedMods… 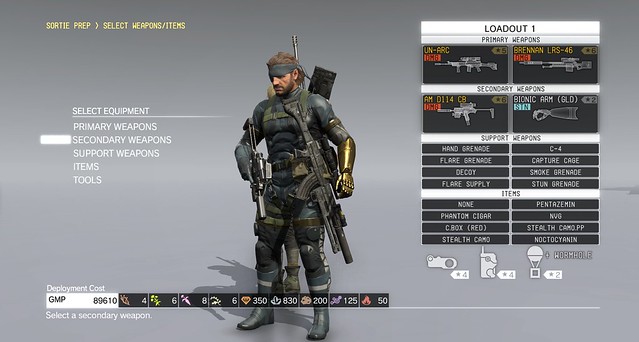 It grants players access to all the super-hidden content that they may not have otherwise known about just by playing the game the normal way. Some of the items that can be unlocked – such as Quiet’s naked gold and silver gold outfits – can be a bit difficult to access by the game’s standards.

Of course, you’ll still have to research the items to gain access to them so it’s not like they’re just added to your inventory for free.

“PLEASE BE CAREFUL : as the Console exclusive PRE-order dlcs does not have textures and will black/crash game remember to always make a back up of your Data1 File”

You can grab the Metal Gear Solid V: The Phantom Pain DLC and item unlocker mod from Nexusmods.

[Update 10/16/2015: I’ve been notified that the DLC and item unlocker mod file is no longer available. However, user GlitchedGuy has a backup of the DLC and all items unlocker mod that you can download from Nexusmods.]

[Update 10/19/2015: A new version of the DLC and item unlocker is available from the original creator right here.]