A new video gameplay demo for Koei Tecmo and Omega Force’s upcoming Attack On Titan game went live during this year’s Tokyo Game Show. The demo showcased the 3D maneuver gear, the combat and how the titan AI reacts and provides a decent challenge to players.

GameFreaks365 caught the latest trailer that was showcased during this year’s TGS and they did a brief one minute video based on the trailer that you can check out below.

New gameplay footage for the upcoming video game adaptation of Attack on Titan has been released at the Tokyo Game Show. The game is being developed by Omega Force, best known for the Dynasty Warriors series. The gameplay will look really familiar to fans of the anime series.

That video doesn’t actually show you all of what you can do in the actual game. Another eight minute gameplay demo was also available on hand, being played live on the show floor of TGS where gamers were able to see how the mechanics worked, what the controls were like and how the titans behaved in a real gameplay setting.

You can check out the eight minute video below from YouTuber Anime Games Online, which has captured footage from a live-stream of the event in Tokyo, Japan.

8 minutes of Shingeki no Kyojin / ATTACK on TITAN gameplay from the PS4 video game live stage demo online at the Tokyo Game Show (TGS 2015). Erin is training with Armin. This game will be on PS3 and PS Vita too and comes out in 2015 in Japan and 2016 in America/Europe.

As you can see, you can grapple around using the 3D maneuver gear. It’s very fast and very dynamic. The titan combat centers around locking onto the target and locking onto specific parts of the titan in order to briefly disable it, incapacitate it or cut the nape and kill it.

Koei Tecmo mentioned before that players would have the choice in being able to attack various body parts of the titans, and we can see in the video above that arms and legs can be severed with the right attacks at the right angles, rendering the titans immobile or briefly disabled. Of course, the titans can regenerate and depending on the class of titan depends on how quickly they can regenerate.

The only way to keep a titan down for good is to slice open the nape in the back of their neck.

As indicated in the video, skilled players will be able to blast through and completely cut down titans without having to waste time with their arms or legs – instead they can just dive in, cut the neck and get out, very similar to Feng Lee’s Attack on Titan Tribute Game. 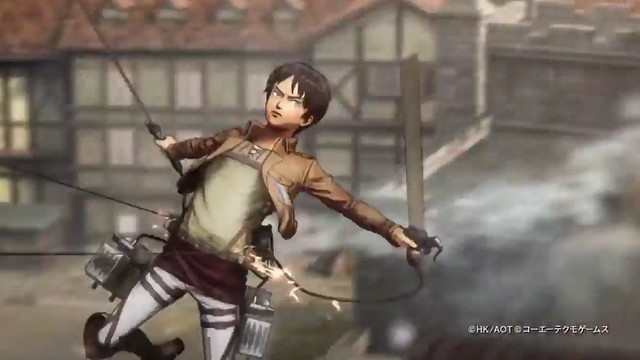 The action in the game looks really good. Also there’s a real danger of being grabbed out of the air while attempting to fight multiple titans at once, so players will have to either rely on teammates to help or watch their back to avoid being snatched up and eaten.

Even if you are unfortunate enough to get plucked out of the sky like a fly on the tongue of a hungry frog, you can still fight and slash your way out of the grip of a titan by cutting off their fingers and freeing yourself.

The only thing that seems a little cheating is that players appear to have unlimited fuel, which makes it a lot easier. If you had to stop and eventually refuel it would easily force players to conserve how they fought and keep them wary of and on the lookout for refueling stations.

Attack on Titan is due for release on the PS3, PS Vita and PlayStation 4 later this year in Japan and in 2016 for North America and Europe. Need more info? Feel free to visit the official website.