Runbow Brings Together Indie Icons For Wii U Racing Game

Due out on August 27th for $14.99, Runbow is a zany indie-platforming racing game from 13AM Games. The title sees players taking on the role of some of the most iconic heroes and heroines within the indie scene as they race from start to finish in obstacle-filled courses that will test both reflexes and wit.

Runbow can be summed up as a pantheon of indie darlings brought together in what might best be described as Mad Dash meets Super Smash Bros.

The game has some unforgiving platforming segments as players blast through the stages, attempting to outrun each other while also dealing with additional enemy forces. You can check out the trailer for the game below.

Look who’s joining Runbow! Who will be your favourite character? Sound off below! official site: https://www.13amgames.com/ facebook: https://www.facebook.com/13AMGAMES twitter: https://twitter.com/13amgames

Being able to run through side-scrolling obstacles and attempting to get to the finish line reminds me of a multiplayer version of the older Super Mario games on the NES. I can’t believe we haven’t seen more titles like this before.

Also, all those icons from games that aren’t AAA titles… that was a real pleasant surprise in the trailer. I’m glad to see the Drifter in there from Hyper Light Drifter. That’s one of those games I’ve really been looking forward to playing. 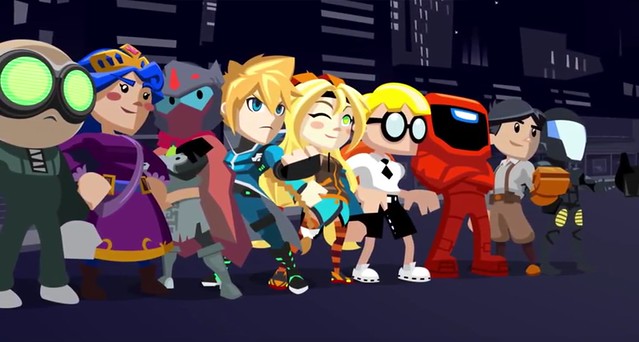 Slightly lesser known heroes like Max from the criminally underrated yet sales-force Mutant Mudds also makes the cut, along with Teslagrad’s hero and even a familiar face from Guacamelee. The only character they’re missing from the indie league of underrated heroes is Shank.

I’m glad to see more games coming out that break through the molds of traditional platforming and racing, and hopefully sometime in the near future maybe we’ll see a 3D version that takes the Mad Dash formula and brings it into today’s generation of gaming.

In the meantime, you can look for Runbow to make a splash on Nintendo’s eShop starting August 27th. Again, it’ll be available for only $14.99 and you can learn more by paying a visit to the official 13AM Games Website.