[Original article:] Destructoid has been in the news off and on throughout the past year and not always for the most flattering of reasons. Even still, when there’s smoke there’s sometimes fire and where there’s fire there’s something there that caused it. In this latest chaotic kerfuffle, part of Destructoid’s own community has fractured and rallied against the way the website is being run after the administration and moderation team of the forums were fired; the forums were closed down and new rules were set into motion following a “rape” joke.

Basically, the site is aiming to be more “open” and welcoming to newcomers who aren’t familiar with the old Destructoid culture. The site is described as having two separate yet distinctly unique communities: there’s the front page community who discusses and talks about the news and then there’s the forum community, a more close-knit group of individuals.

Destructoid owner and co-founder of Modern Method, Yanier “Niero” Gonzalez has been attempting to restructure the way the forums work; he wants to bridge the two Destructoid communities that are both active yet disparate. However, he felt that the forums had become toxic.

On July 21st, 2015 [backup] Niero made a post on the front page to basically say that the forums would be undergoing a major overhaul. This was met with a lot of resistance because the community felt as if Niero didn’t properly discuss this with the community since the post was made before discussing the changes with the mod and administration team. There were also complaints that the forum thread used for making suggestions on the site was completely ignored.

Throughout this time tensions arose and things began to tear apart within the community. One of the more active threads on the forum was the #GamerGate thread about media corruption, something that Niero felt was a distraction from actually talking about games.

A few days later after some back and forth with disgruntled Destructoid forum users, Niero decided to shut down the #GamerGate thread and the forums.

Additional archived conversations leading up to the closure of the thread can be found here and here.

According to Niero, the discussion of media controversies and #GamerGate can still be discussed on the CBlogs, but the forums are kaput. He stated the following in an e-mail exchange…

“Short term – People should definitely still post about what’s going on the media in our Community Blogs. They’re just like the forums but in a blog format. Actually, they’re better than the forums in that you don’t have to post 10 times until the moderators “approve” you. Since we have more staff watching out for spammers it’s a better experience for everybody.”

“This isn’t the first time I’ve tried to have a cohesive forums system to ditch Vbulletin. It’s just not the right solution for us. I’ve been trying to ditch them since 2009, when we tried an experimental Ruby-based forum switch that nobody liked either.”

Some of the Destructoid users agreed that the forums could be done better, others were angry that the community that they felt a part of was being ripped out from underneath them.

“Almost everyone is very emotional about it. Even when we fought, we were all family, you know? Most people are very angry with Niero.

“Unlike most forums, they were very active contributors to the site in some way. They organized game nights, posted blogs promoted to the FP. So, a lot of people feel used. They were actively trying to make dtoid a better place and provided content. Then called “trolls” and booted.”

According to Red Morgan, a lot of former Destructoid forum users have moved to a site called Digital Confederacy.

The main issue is that a lot of people feel as if their ability to discuss topics freely has been impinged upon. According to Niero, however, this was something that he wanted to do for a while and decided to clamp down on certain topics of discussion and certain word usage. What kind of words? “Rape”.

Before the forums shutdown and the mods were banned and the chaos ensued there was a lot of behind-the-scenes and out-in-the-open strife between staff and Niero.

A former administrator of the forums named Jim, who went by the handle OpiumHerz, explained how the narrative about the Destructoid forums being “toxic” came about, writing in an e-mail…

“[…] a newbie called Ronsoak complained to us because of the lax use of the word “rape”, including rape jokes that were ripped here and there (although never aimed at specifically a person). We actually had a pretty serious talk with most of the community chipping in regarding this topic and while not all of our regulars liked those jokes, the consensus was pretty much that they’re not a dominant thing and that we value each other’s freedom to rip them, because nobody was forced to do them. Ronsoak took severe offense in a tech support thread where someone called his desired PC configuration a “rape machine”.”

”This Ronsoak (who is, apparently a friend of Dtoid’s own Laura K) flipped out why we mods didn’t do anything. We didn’t do anything because no rule was broken and this instance wasn’t even aimed at him. We also told him that if this use already offends him THIS much he wouldn’t last in the forums generally, because we tended to have a rougher tone with each other at times.”

You can read the thread with Ronsoak and his complaints about the “rape jokes” right here.

“I don’t know what’s up with the hazing culture or that rape joke that isn’t but is a rape joke actually because it says “rape”.

“I need to make myself clear: that shit ends today. Like, right now. I’m here because I really [enjoy running] inclusive websites for all kinds of people. I am not tolerating even 5 more minutes of that.

“I get that forums are a place where people go to vent and shit sometimes, but I do not need that from our own mods.”

This eventually resulted in one of the users, Firion, getting into a spat with Niero, which resulted in Niero claiming he was a “racist”. Archives of the conversation were made as many users felt that Niero attacking Firion (who was defending Nihil over the rape joke incident) was uncalled for. In the end, though, Nihil was banned from the site along with the rest of the moderators. Nihil did a two page blog post explaining why he was leaving and how the management of the forums was creating strife. 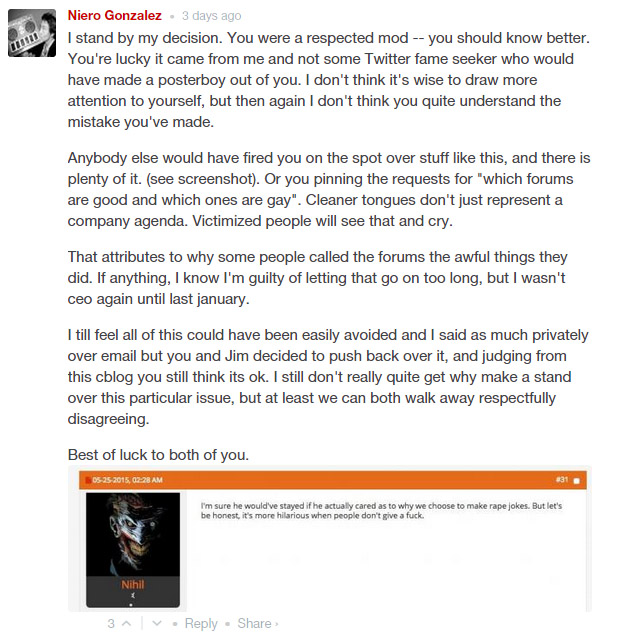 During this time, administrator OpiumHerz decided to poke fun at Niero by changing his avatar to the following image before being banned. 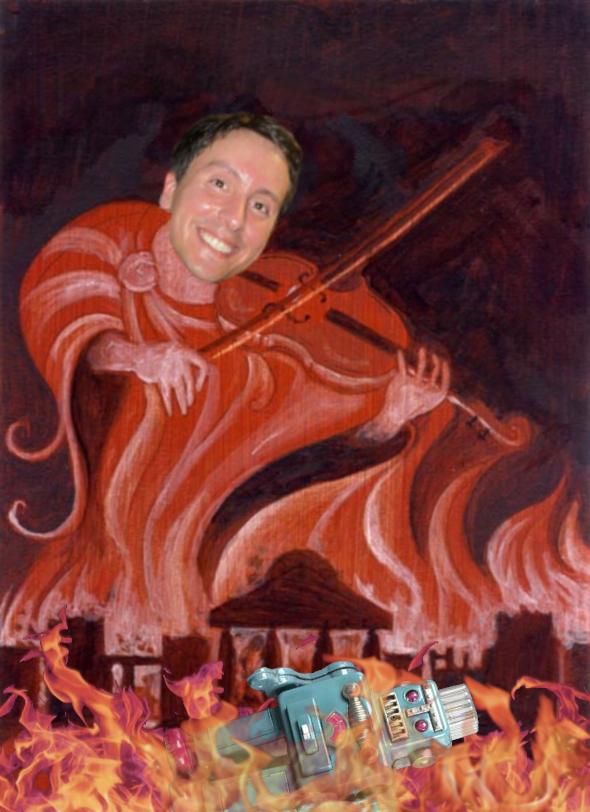 “At that point the regular mod team had quit altogether. All four of us. There were four other people who still had mod rights.”

“I heard back from three of those four people because I asked them about this. They all confirmed that NONE of them were for my ban. The “hardest” was a ban for “a few days” (quoted) if Niero would fear a retaliation by me for removing the avatar. None of them were in favor for a one year “temp ban”. Given that the first ban message talked about “three strikes”, and then suddenly was changed when I called bullshit because I never got any strikes to begin with (which Niero’s replies confirm), and the forum mods confirmed that they were against a ban, I suspect Niero power tripping because the pic got under his skin.”

It is true that in an e-mail exchange the “three strikes” was not used, as confirmed by Niero.

The community had a stiff backlash against Niero in the forums, as some claimed he was “power tripping” and that he was letting culture critic “Anita” influence the direction of the site.

In the thread about #GamerGate that was eventually closed down, Niero tried to explain that he was doing this to safeguard himself from any potential legal repercussions from dangerous security breaches or privacy violations. He also states that these changes are done to make Destructoid less “exclusive” and “hostile”…

“I’m not going to dignify any further conversation about why this forum is so unpopular, exclusive, hostile, and out of control. The only thing supporters seem to want to do is remind me that I didn’t take this stand years ago. I should have done this years ago. I’m sorry.

“If I can’t get this forum moving towards a positive direction I’ll just shut it down. At least I tried instead of allowing the same antisocial behaviors to go on here and not giving it a chance.”

However, not everyone agrees that this fallout was the result of a “rape joke” or the community being exclusionary. OpiumHerz states that transparency and communication could have saved all of this from transpiring…

“I talked, naturally, about this quite a lot with other ex-community members and my impression is none, literally none of this, would have happened when Niero just sat down with us first, talked about what his goals are, why he is pursuing them and then asking the community how to go about it. While this thing started community members were still brainstorming and pitching ideas to make the forums more visible to get more exposure and traffic in.”

Red Morgan, a long time user of the Destructoid forums, felt as if things could have been remedied if the situation wasn’t handled so harshly, and that it didn’t help that there was such a wide disconnect between the forums and the front page. According to Morgan, improvements could have been made by at least addressing some of the concerns in the “Community Discourse Thread”…

“One of the first threads Niero closed was the “Community Discourse Thread.” The purpose was to provide feedback on the direction of Dtoid.

“Staff very, very rarely descended into that thread, so people felt that their feedback was widely ignored. A lot of it was just bitching, but there were sincere efforts to improve the forums, blogs and other Dtoid related content. So, when Niero descended into the forums and in his words “like a wrecking ball” people felt like an outsider was ignoring their culture.”

However, Niero still has plans for the forums and states that things will continue to move forward for Destructoid…

“I really think we need this piece of the site done right, so I’m going to try again with a different coding team.

“We just have to devote our time to the stuff that most people are actively enjoying. The independent publishing hustle doesn’t pay a whole lot so I have to choose my battles to keep the party going.”

Some users have already migrated elsewhere, others are hoping for the best and a few more are waiting for the new changes to go into effect.

Times are definitely changing in the world of internet culture and community driven websites. Whether or not the old guard will be able to adapt to the new changes, or continue to hoist up platforms for all sorts of free speech (within reasonable limitations) seems like a challenge few people would want to endure.

Even still, Destructoid is dealing with a purge of community members who express discontent over a situation that they felt was unnecessarily explosive and was handled poorly.