Corgi Warlock Sees An Unstoppable Corgi Out To Save The World

Featuring up to four-player cooperative play, a handful of spells and tons of levels, Corgi Warlock is a game designed by a Pixar veteran who decided to take a break from animating in the world of movies and work on a game instead.

As mentioned on the itch.io page, the designer of the game stated…

“I decided to take a break and work on my own thing for a bit. Its always been a dream of mine to make my own video game, and my awesome corgi, Maia, was the inspiration for it. I’m doing all the art, animation, programming, and music on my own.”

Xander was inspired by World of Warcraft, Shovel Knight and Castle Crashers. It’s quite evident seeing the inspirations in play once you take a look at the trailer.

The game looks surprisingly polished to be a one-man band project. You can see it in action with the trailer below.

The design mechanics are fairly rudimentary, with running, jumping and shooting being the basic focus of the gameplay, but the added project patterns from baddies, multiple enemy types with their own behavior and various bosses that will challenge your timing and reflexes, it’s safe to say that the game takes some very basic mechanical tenets and expands them to something that looks both fresh and fun. 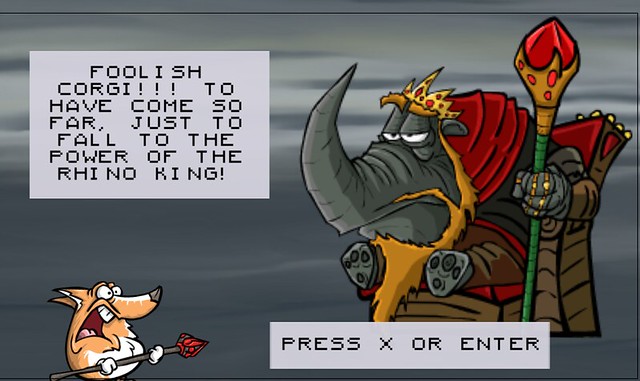 The game features 90 different levels to explore, up to four-player cooperative play as well as four-player battle modes. 60 different enemies to encounter, fast-paced shoot-and-run action and some colorful and endearing characters out to stop the evil skeleton Bunny King all makes for an interesting looking side-scroller.

If you like what the game features and you want to play-test it for yourself, you can get your hands on the demo by hitting up the itch.io page. It’s only 87MB so you don’t have to worry about it taking up too much room. If you’re already convinced that this game needs to be on Steam, you can upvote it and favorite it by visiting the official Steam Greenlight page.